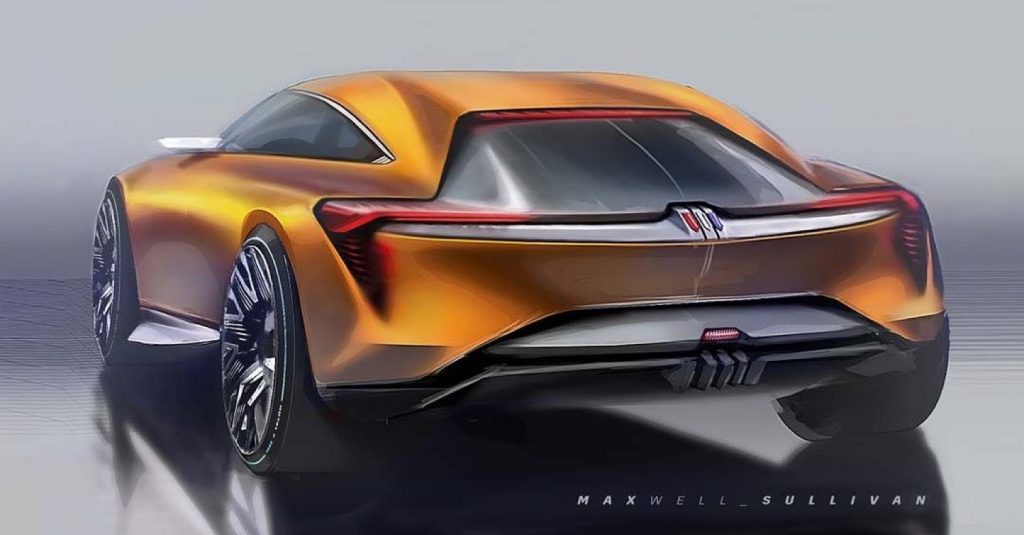 The sketches were produced by Maxwell Sullivan, Judy Kim, and Kevin Nougarede, and show the Buick Wildcat EV from the outside, as well as inside the cabin. Compared to the final product that was revealed previously, these development sketches show a good deal of continuity, with a low and wide stance, as well as cab-back proportions and coupe-like roofline that borders on hatchback territory. The wheels are quite large, filling the wheel wells with a fan-like, multi-spoke layout that adds a layer of complexity to the otherwise smooth bodywork.

Up front, we see sharp, checkmark headlights and a sculpted and sharp nose, while the rear end incorporates additional wide styling bits. The interior is also quite futuristic, with a 2+2 seating arrangement, digital readouts and displays, and white upholstery matched with silver trim.

In addition to revealing the new Buick Wildcat EV Concept, the Tri-Shield brand also unveiled a new logo, which once again incorporates the three shield elements, but arranges them in a horizontal pattern, as opposed to the ascending pattern used previously. The new logo will coincide with a completely new brand identity, which will include new typography, a new color palette, and a new marketing approach, all of which is set to make filter down over the course of the next 12 to 16 months.

Looking ahead, Buick will make the move to a fully electric portfolio by 2030, with the first Buick electric vehicle to market for North America scheduled to arrive by 2024. Look for these new Buick EVs to incorporate the same styling previewed by the latest Buick Wildcat EV Concept.