Corvette Racing failed to finish the 90th running of the 24 Hours of Le Mans after the No. 63 entry suffered a mechanical issue and the No. 64 car was taken out by a wayward LMP2 car.

The No. 63 Corvette C8.R of Antonio Garcia was leading in GTE Pro by a significant 17 seconds at the eight-hour mark when it suffered a strange left rear suspension failure on the Mulsanne Straight, forcing the Spaniard to limp the car back to the pits for lengthy repairs.

💔Heartbreak for the #64 Corvette

It was all getting abit tight down the Mulsanne – with the prototype pushing the LMGTE Pro leaders into the barriers.
Gut wrenching!

With the No. 63 car out of the fight for the lead, the team’s full focus turned to the No. 64 car. British driver Alexander Sims was leading the GTE Pro class by over a minute with roughly six hours remaining when he was hit by the AF Corse-run LMP2 car of amateur driver Francois Perrodo. The Frenchman was in a duel with another LMP2 car and pulled out to pass in the draft not knowing the yellow Corvette of Sims was alongside, bodychecking Sims and sending the car hard into the outside metal barrier.

“This isn’t how we wanted our Le Mans race to end,” Laura Klauser, GM Sports Car Racing Program Manager, said in a prepared statement. “We’re all proud of the dedication of everyone on the Corvette Racing team to give us the absolute best chance for our ninth class victory. At the end of the day, we’re all proud to be part of the One Team effort that is Corvette Racing. We’re glad Alexander is OK and that the C8.R kept him safe. Our focus now is on our two full-season efforts in the WEC and also the IMSA WeatherTech SportsCar Championship.” 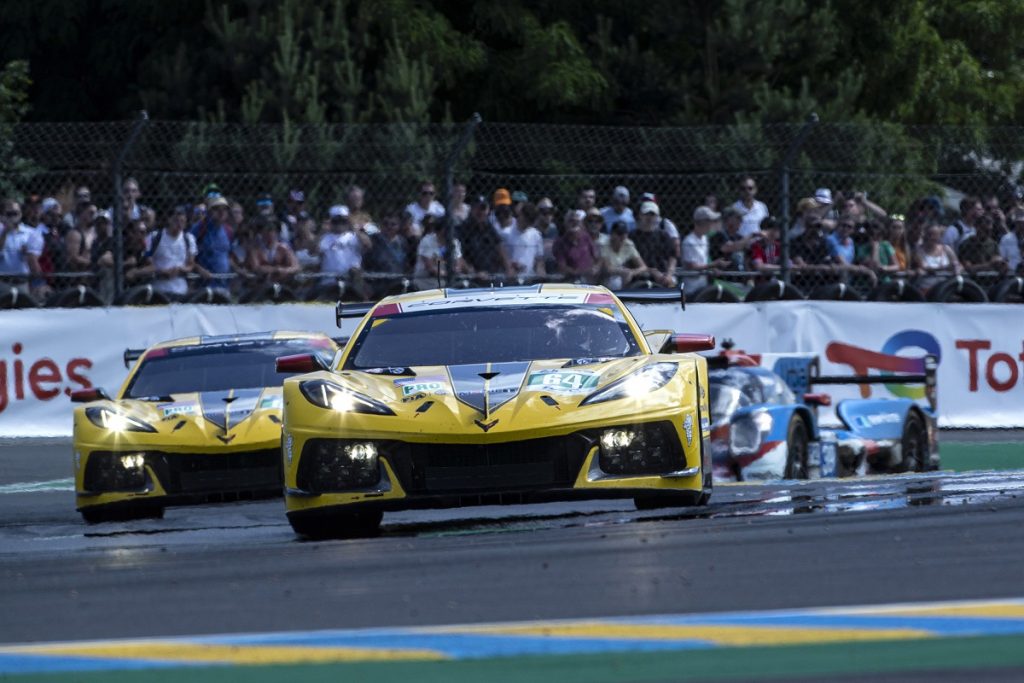 While both Corvettes showed tremendous pace in both qualifying and race trim, the Pratt Miller-run team left Le Mans with nothing to show for it. The FIA World Endurance Championship will also abandon the GTE class at the conclusion of this season in favor of GT3-based machinery, making this the last appearance at Le Mans for the GTE-spec C8.R, which has more downforce than the GT3-spec version that currently races in the IMSA WeatherTech series and also lacks anti-lock brakes, among other differences.

The GTE Pro class was won by the No. 91 Porsche 911 RSR of Gianmaria Bruni, Richard Lietz and Frederic Makowiecki, which capitalized on the bad luck of not only the two Corvettes, but also the No. 92 Porsche 911 RSR sister car. The two AF Corse Ferrari 488 GTE entries took up second and third in GTE Pro, with the No. 92 Porsche finishing fourth, two laps down. The Riley Motorsports-run Ferrari 488 GTE was fifth in GTE Pro after lacking pace throughout qualifying and the race and falling three laps behind the class leader.

The overall win in the Hypercar category went to the No. 8 Toyota GR010 Hybrid of Sébastien Buemi, Brendon Hartley and Ryo Hirakawa, which crossed the finish line just over two minutes ahead of the No. 7 Toyota sister car.