The wicked-fast, twin-turbocharged Corvette C8 Stingray built by Anderson Dick and his team at FuelTech USA experienced a minor setback at the dragstrip recently after the vehicle spat out one of its rear-wheel liners during a hard launch.

This rather humorous mishap happened while BBC’s Top Gear was filming an episode featuring FuelTech’s impressive 1,350-horsepower Corvette Stingray, with the tall-sidewall slick drag radial tire impacting the wheel well and stripping the plastic liner off the vehicle as it turned. The wheel well liner then ends up underneath the spinning tire on the drag strip, causing the Corvette to run it over as it launched. The liner also stripped wires out of the vehicle, causing it to become stuck in first gear for a brief period. 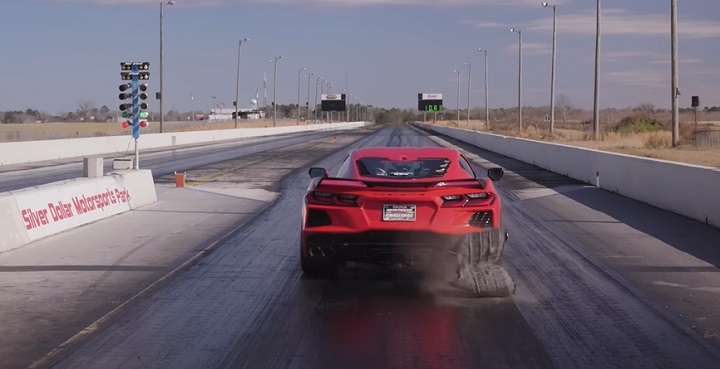 As we reported previously, FuelTech USA’s record-breaking Corvette features two Garrett G35-900 turbochargers, which pump the 6.2L V8 LT2 engine with enough boost to produce a frankly absurd 1,350 horsepower at the rear wheels. The internals were also beefed-up with forged Diamond Pistons and Wiseco Boostline connecting rods. These modifications are enabled by FuelTech’s FT600 fuel management system, which works in conjunction with the factory PCM to control things like spark and air/mixture. This piggyback ECU is able to sidestep GM’s encrypted ECU to alter the vehicle’s engine settings and allow for forced induction modifications to be more effectively applied.

Check out the video embedded below to see FuelTechUSA’s modded Corvette in action on Top Gear.