Buick is at the top of the list in the recent J.D. Power 2022 U.S. Initial Quality Study (IQS), leading all other brands studied with the least number of reported problems per 100 vehicles. 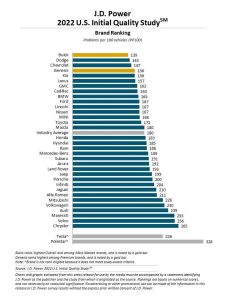 Now in its 36th year, the J.D. Power 2022 U.S. IQS measures vehicle quality based on responses collected from 84,165 purchasers and lessees of new 2022 model-year vehicles, each of whom was surveyed early on in the ownership period. Each respondent was given a 223-question survey that breaks down vehicle quality into nine categories, including infotainment, features, controls and displays, exterior, driving assistance, interior, powertrain, seats, driving experience, and climate. The survey was fielded between February and May of the 2022 calendar year.

From these responses, J.D. Power calculated the average number of problems per 100 vehicles, or PP100, with a lower PP100 indicating a higher initial quality. Of all the brands studied, Buick had the lowest PP100 at 139, a substantial 17 PP100 improvement as compared to 2021, elevating it from a 12th-place finish last year.