A new version of Apple CarPlay that was previewed by the Californian tech company at its annual developer conference this week will support multi-screen projection and will also feature a gauge cluster and HVAC controls. 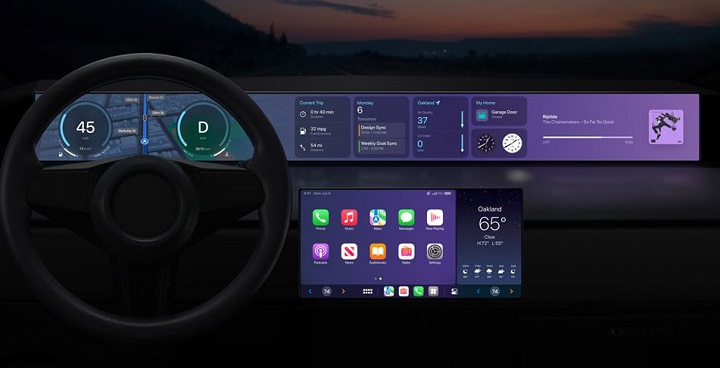 This latest version of Apple CarPlay transforms the system from what is essentially a phone screen projection software into a fully integrated system that can control parts of the car and relay information such as ground speed, engine RPM and system temperature. The system will support multiple screens, regardless of size or shape, allowing it to project onto the central infotainment screen and replace the gauge cluster and the HVAC controls. Popular iPhone apps will also appear on the screen, including Maps, Audiobooks, Podcasts and more. Interestingly, the system will still run off a connected iPhone, but will still be capable of tapping into the vehicle’s various systems.

OEM partners that are allegedly “excited to bring this new vision of CarPlay to customers,” in the near future, according to Apple, include Acura, Audi, Ford, Honda, Jaguar-Land Rover, Lincoln, Mercedes-Benz, Nissan, Porsche, Polestar and Volvo. GM is notably absent from that list, which could be due to the fact that it’s teamed up with Google to integrate its Google Built-In automotive software in its latest vehicles, along with the Android Automotive OS. Much like CarPlay, Android Automotive supports the use of Android/Google apps on the display screen and allows the user to seamlessly switch between phone-based entertainment and navigation controls and vehicle controls.

Some automakers may be hesitant to support this more integrated version of Apple CarPlay, as it would be turning over/sharing a certain amount of customer data with Apple. Integration with third-party software like this seems inevitable, however, with virtually every major automaker partnered with either Apple, Google or both to support their own infotainment solutions.