General Motors is poised to introduce brand-new generations for its midsize pickup offerings with the 2023 model, including the 2023 Chevy Colorado and 2023 GMC Canyon. Prototype versions of both these vehicles have been spotted testing on public roads, and now, GM Authority is taking a closer look at these spy photos to compare the new front ends of both vehicles.

As you can see by looking at the photos, the prototype vehicles featured here are covered in light black-and-white camouflage, obscuring some of the features underneath. Nevertheless, there are still several details worth picking out.

Let’s start with the 2023 Chevy Colorado, as seen on the left in the comparison picture above. Although it’s unclear exactly which trim level this is supposed to be, it’s likely the LT with the Z71 package equipped. The front end of this prototype shows placeholder headlights, but still demonstrates the general outline of the primary lighting cluster. The headlights are situated along the top of the front fascia in a horizontal fashion, while a set of fog lights are placed around the outer edges of the bumper. The bumper also has a prominent air deflector mounted around the lower edge, with tow hooks as well. Finally, the truck is rolling on a set of 18-inch wheels wrapped in Goodyear Wrangler AT tires sized at 265/65R18.

Next, let’s look at the 2023 GMC Canyon. Again, the specific trim level for this prototype isn’t certain, but it would appear to be the Denali. Compared to the 2023 Chevy Colorado prototype, this GMC Canyon prototype is equipped with production headlights, showing off a two-tiered lighting design with thin strips along the top headlight cluster and the primary forward lighting lower in the front fascia. Fog lights are situated in the middle of the front bumper. This GMC Canyon also equips a high-clearance bumper design without a visible air dam, while tow hooks are along the bottom edge of the front fascia. Finally, this truck is rolling on what appear to be 20-inch wheels wrapped in Bridgestone Dueller AT tires. 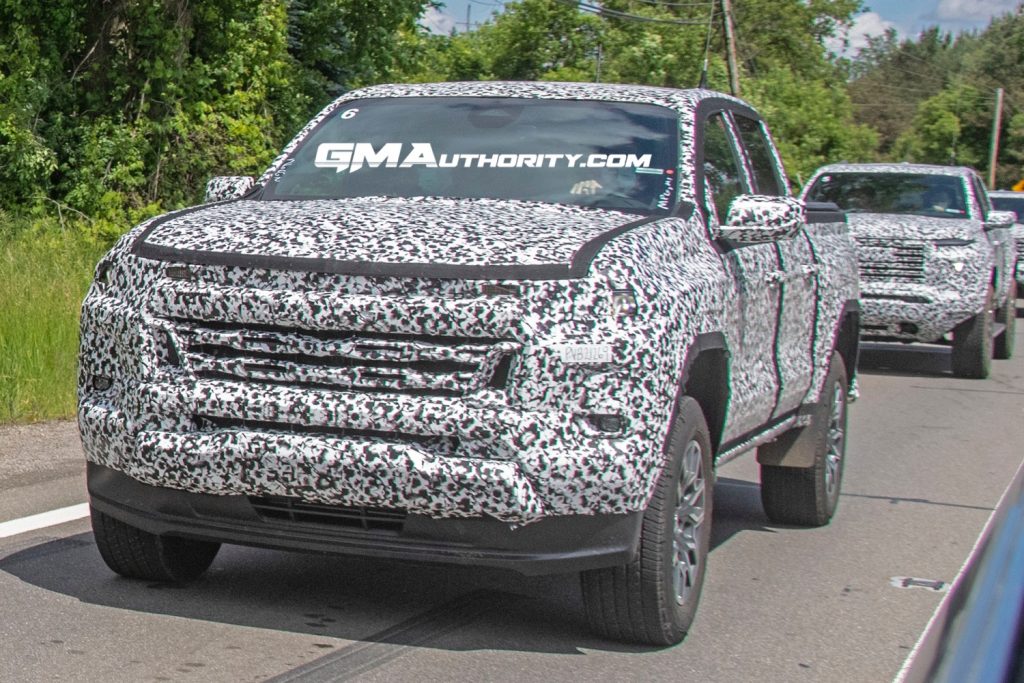 Last, but not least, we have this second 2023 Chevy Colorado, which is also wearing a set placeholder headlights. However, this particular example shows the lower front air dam without camouflage, unlike the 2023 Chevy Colorado prototype featured at the top of this article.

In addition to new exterior designs, the 2023 Chevy Colorado and 2023 GMC Canyon will feature an overhauled interior, plus the turbocharged 2.7L I4 L3B gasoline engine under the hood. Under the body panels, both trucks will ride on an updated version of the GMT31XX platform.