GM Authority spy photographers have captured the first photos of the 2023 Chevy Colorado testing with skin-tight camouflage, revealing some of the future mid-size truck’s design secrets. 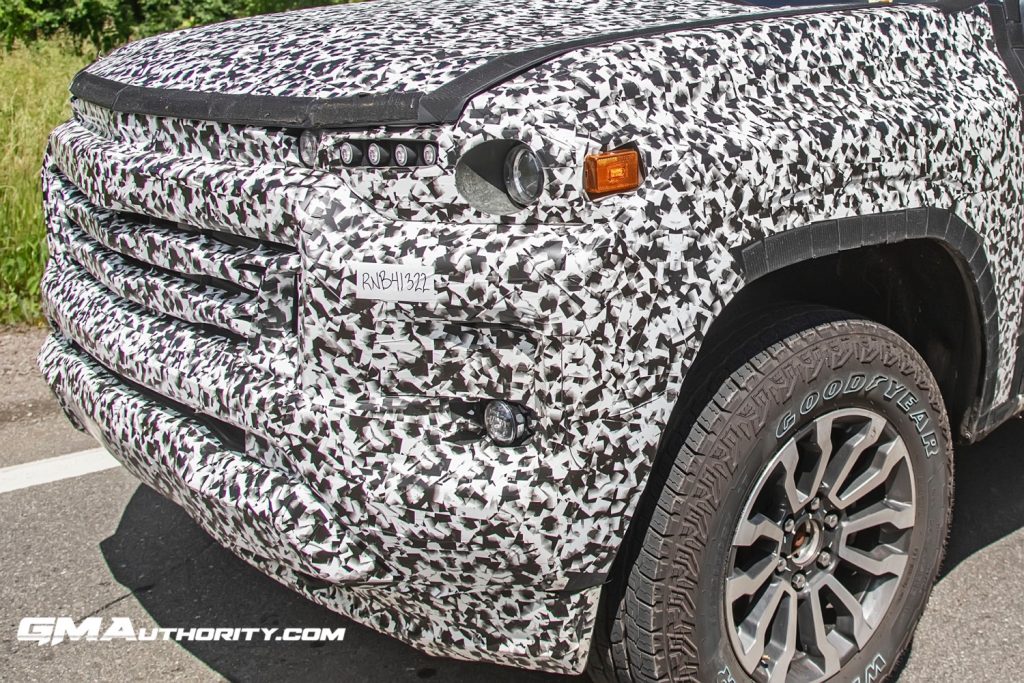 This 2023 Chevy Colorado, which is labelled Prototype #2 per the sticker on the rear window, sticks with the placeholder headlights seen on Colorado test vehicles spotted previously, however these up-close shots clearly show the placeholder lights follow the general outline production headlights, giving us a rough idea of the pickup’s front lighting arrangement. The headlights sit horizontally at the top of the front fascia, with a pair of foglamps mounted lower in the front fascia beneath them. The front bumper also features horizontal grille slats, along with a prominent air deflector affixed to the bottom edge. 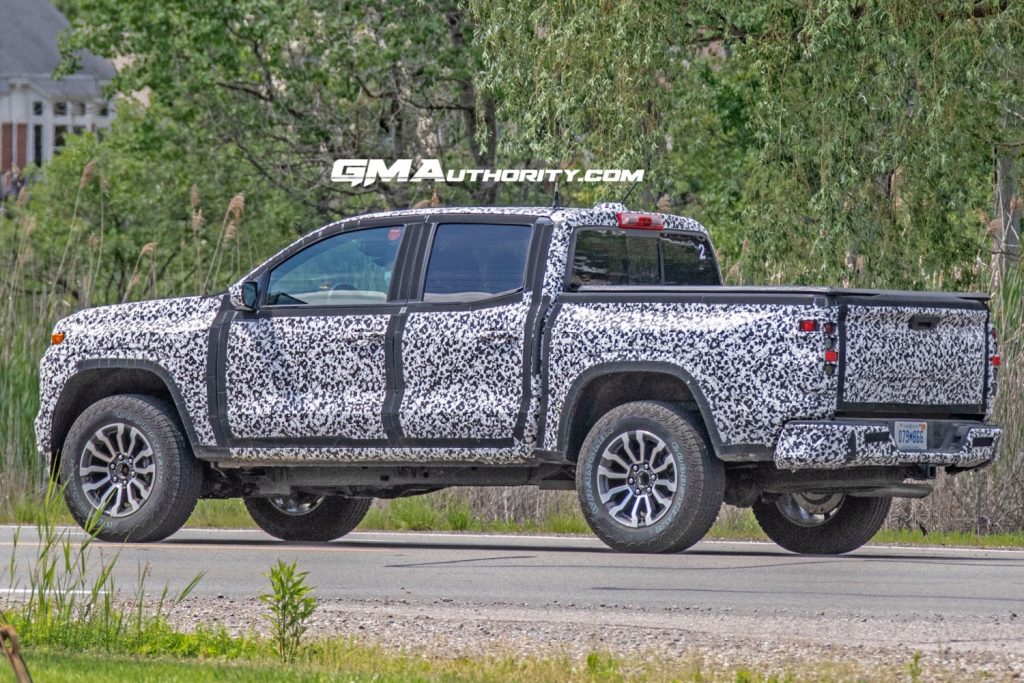 Some other interesting aspects of this prototype include the tow/recovery hooks at the bottom of the front fascia, as well as the never-before-seen side mirrors, which have a stylized shape and rather narrow stalks attaching them to the a-pillar. This vehicle also has in at 265/65R18 Goodyear Wrangler Territory AT tires, no side running boards and a soft vinyl tonneau cover. Out back, a set of placeholder taillights sit on either side of the tailgate, which has a centrally-mounted black plastic handle. This truck does not appear to have a CornerStep rear bumper, although the steps themselves may just be covered up by the black and white camouflage. 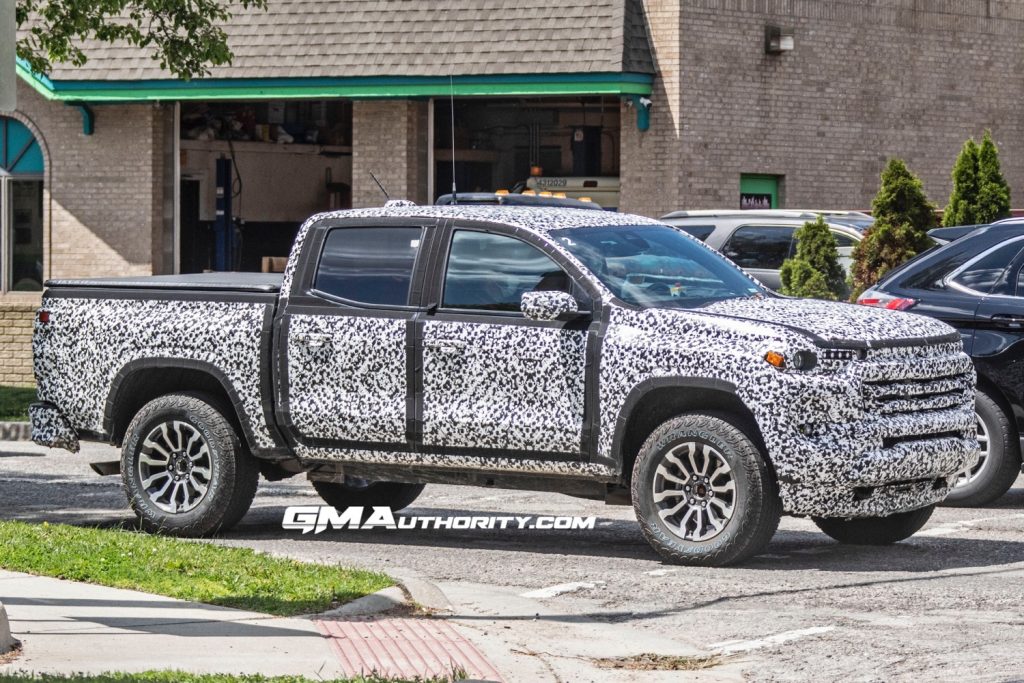 As GM Authority reported previously, the next-generation 2023 Chevy Colorado will equip the turbocharged 2.7L I4 L3B gasoline engine as standard. Exact output numbers are yet to be determined, although the L3B engine is rated at 310 horsepower and 430 pound-feet of torque in the refreshed 2022 Chevy Silverado 1500. The GM 10-speed automatic transmission will be standard, with both rear-wheel-drive and four-wheel-drive available. The truck will ride on an upgraded version of the GMT31XX platform that underpins the current model, with this new platform known internally within GM as 31XX-2. The truck will benefit from GM’s connect Global B electronic architecture, as well. 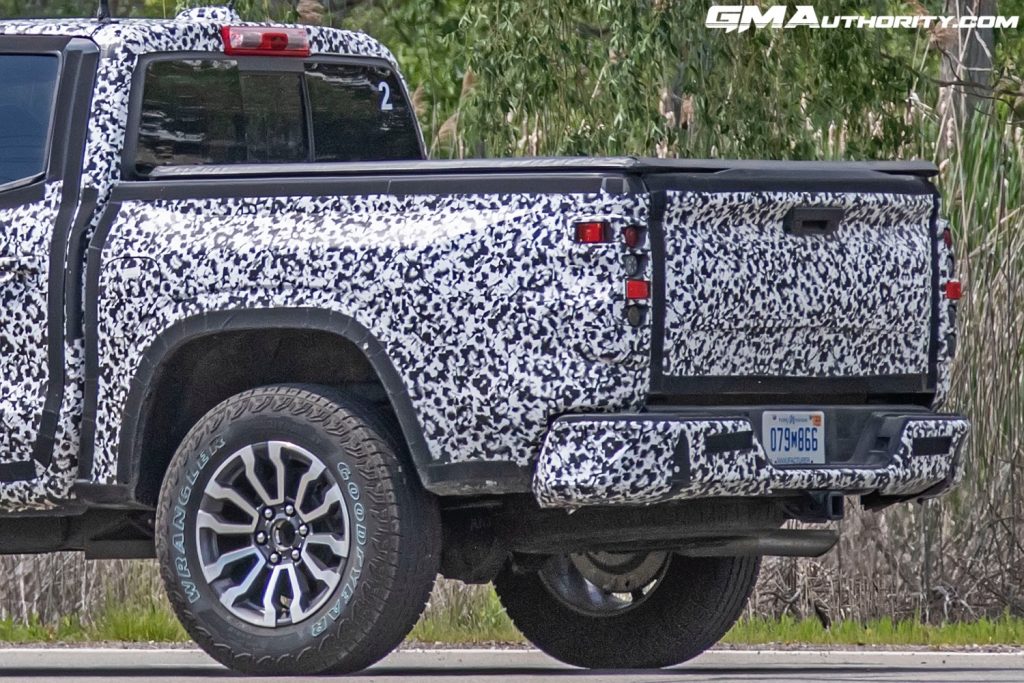 The 2023 Chevy Colorado will launch late in 2022, or at the beginning of 2023. Production of the current 2022 Chevy Colorado will not wind down completely until December of this year, so it seems as though the next-gen truck will not begin arriving at dealers in significant numbers until early next year. In the meantime, you can subscribe to GM Authority to stay up-to-date on all the latest Chevy Colorado news, Chevy news, and other GM news coverage.