Back in March, GM Authority sources revealed the automaker was actively working on a new Chevy Silverado HD ZR2 model that would bestow the heavy-duty pickup with the off-road capability of the light-duty Silverado ZR2. Now GM Authority spies have captured a prototype for the upcoming 2024 Chevy Silverado HD ZR2 testing on public roads in Michigan, giving us a rough idea of what to expect from this future off-roader. 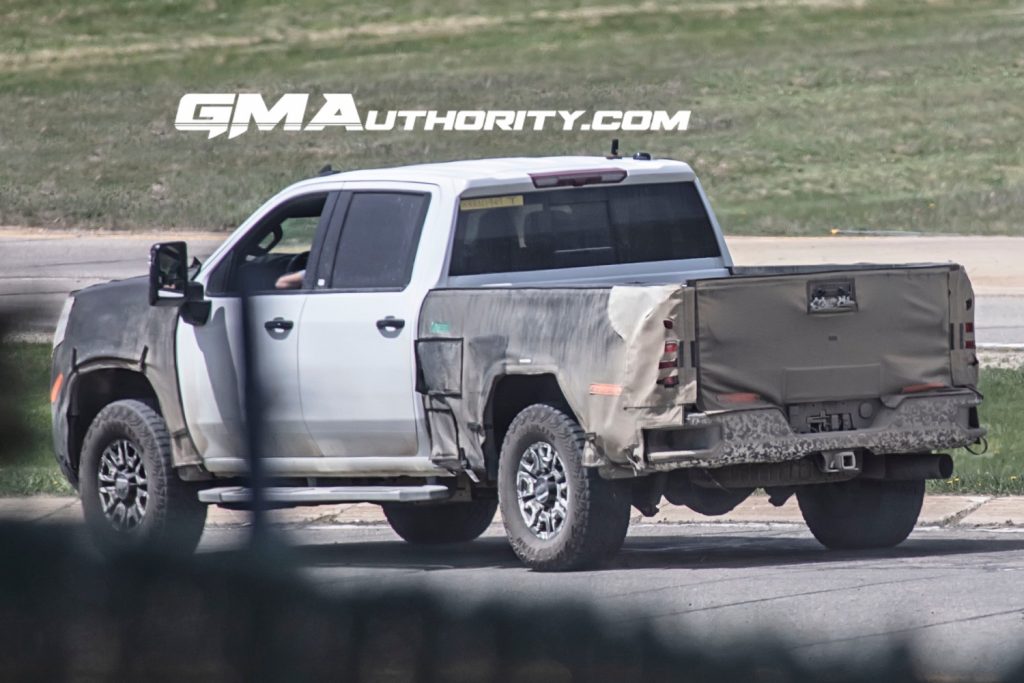 Our spies had to use a long lens to photograph this truck from a distance, but the photos still provide us with a glimpse of the vehicle’s front fasciae and wheel and tire combination. Let’s start with the front end, which appears to be sporting a grille treatment unlike anything seen on the Silverado HD previously. This grille is partially concealed by camouflage, but appears to feature a similar design to the light-duty Silverado ZR2, along with similar-looking vertically-oriented fog lights. We also hear this prototype had a beefy front underbody skid plate that was different than the one seen on the Silverado’s Trail Boss trim, appearing similar to the skid plate seen on GMC Sierra AT4X prototypes. 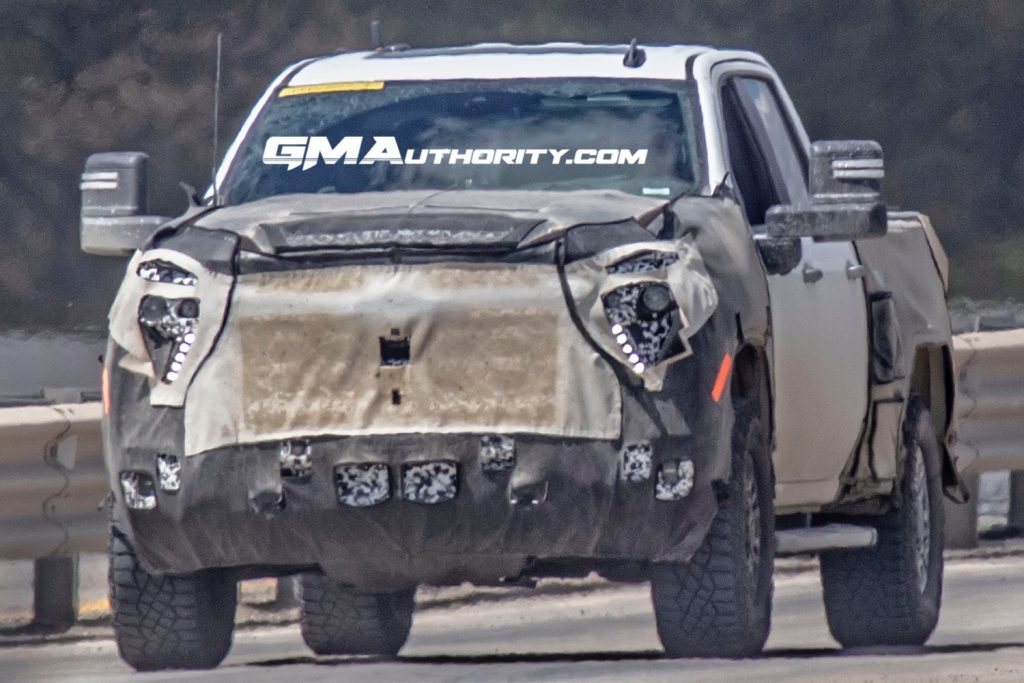 While the 2022 Chevy Silverado ZR2 is only offered with GM’s 6.2L L87 V8 gasoline engine, the Silverado HD ZR2 is expected to offer both the atmospheric 6.6L V8 L8T gasoline engine and the 6.6L V8 L5P turbodiesel Duramax. This particular prototype had a large green sticker marked “diesel” over its fuel door, indicating the presence of the Duramax engine. As GM Authority was the first to report, GM is also cooking up some fresh powertrain updates for its refreshed HD pickups. This will include the introduction of the GM 10-speed automatic transmission as a replacement for the L8T’s six-speed, along with a revised version of the L5P Duramax that will produce nearly 1,100 pound-feet of torque and more than 500 horsepower. 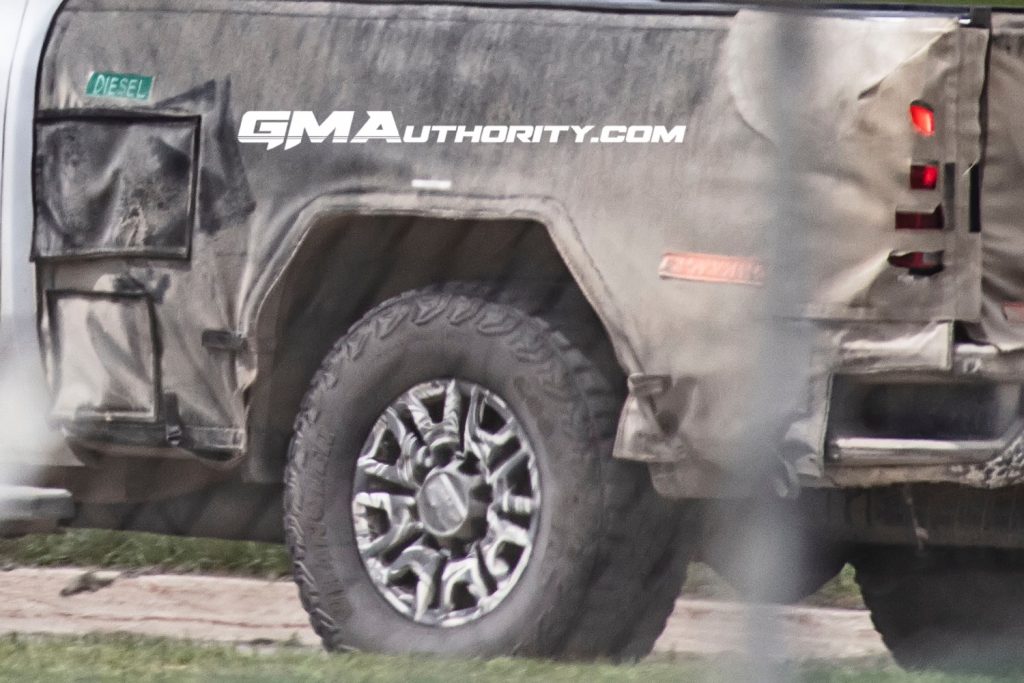 This prototype also had a noteworthy wheel and tire combination with camo-wrapped off-road rims wrapped in knobby Goodyear Wrangler Territory MT tires. These are the same tires used on the 2022 Chevy Silverado ZR2 and will likely appear on the production Silverado HD ZR2, as well. Other key equipment that will set the Silverado HD ZR2 apart from lesser trims include new dampers (potentially the MutliMatic DSSV dampers used on the Silverado ZR2 and Colorado ZR2) 4, along with an off-road front bumper with removable end caps. 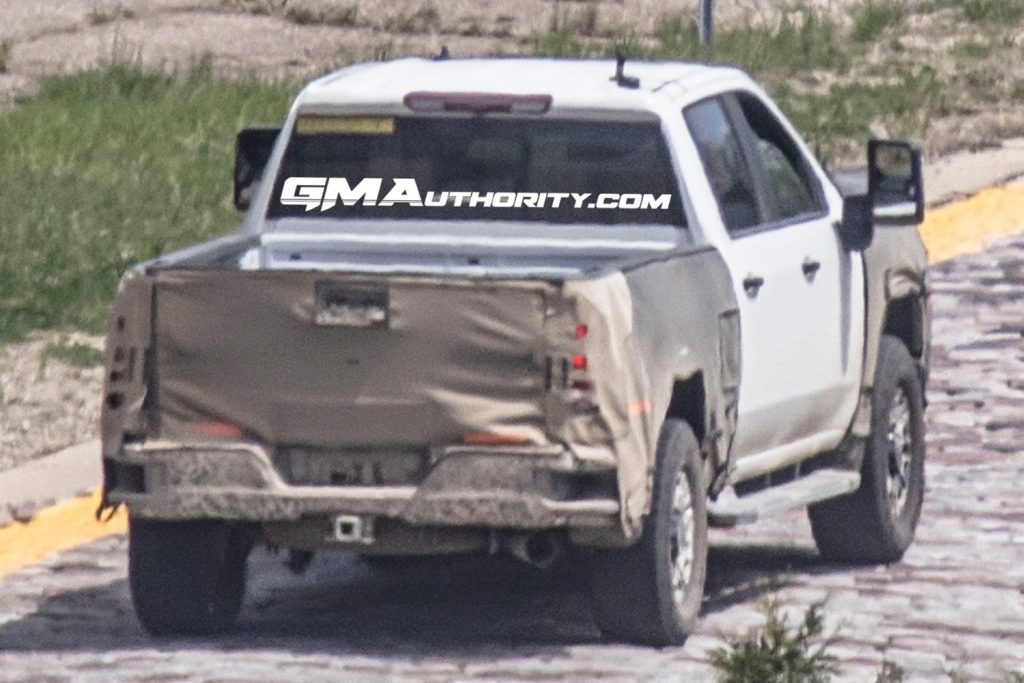 GM Authority will bring you all the latest on this upcoming off-roader as we get it, so be sure to subscribe to GM Authority for more Chevy Silverado news, Chevy news, and around-the-clock GM news coverage.