General Motors has shared the first TV spot from its new Chevy Bolt EV and Bolt EUV ad campaign. The advertisement, dubbed ‘Life Changes’ is a short, 30-second spot that puts a humorous spin on the trials of EV ownership and motherhood. 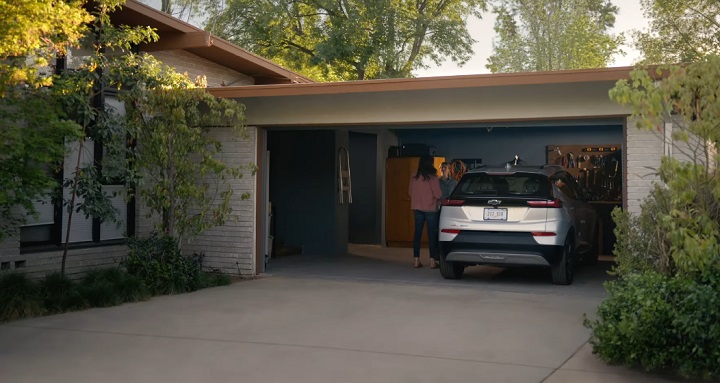 The ad opens with two women standing in a garage chatting next to a Chevy Bolt EUV, when one of the women asks the other if she’s excited. The viewer is led to believe the two are talking about being a new mother, as one of the women is pregnant, however the friend then begins showing the expectant mother how to plug in and charge her Chevy Bolt EUV – revealing the discussion is actually about shifting from an internal combustion engine vehicle to a pure EV like the Bolt.

The voiceover for the ad goes on to tout GM’s home charging stall installation for buyers of the Chevy Bolt EUV. This program enables buyers of either Bolt variant to have the costs of installing a Level 2 charging in their garage covered by Chevy thanks to a partnership between GM and charging stall installation company Qmerit. The offer is available to all U.S. and Canadian GM customers who purchase or lease a 2022 Chevy Bolt or 2022 Chevy Bolt EUV.

This Chevy Bolt EUV advert is part of GM’s new ad campaign for the electric compact car, which debuted this week during television coverage of opening day Major League Baseball games. The new ad campaign is intended to boost Bolt sales following the vehicle’s large-scale battery fire recall, which forced GM to recall all 140,000 examples of the Bolt and Bolt EUV and issue a stop-sale order on the vehicles. This new ad campaign will give the Bolt the second-highest media spend at Chevy this year – behind only the hugely popular and massively profitable Chevy Silverado model line.

Check out the ad embedded below.