Corvette Racing fought back from a drive-through penalty to take the last spot on the podium, and an important championship points haul, in Sunday’s IMSA Acura Grand Prix of Long Beach.

Jordan Taylor started Sunday’s race from pole position in GTD Pro, building a sizable gap to the field of GT cars behind him and running a mistake-free stint before coming into the pits with 61 minutes left in the one hour and 40-minute long sprint race. The team then executed what was thought to be a perfect pit stop for fuel and tires, with Taylor also handing driving duties over to Antonio Garcia at this time, however this is where Chevy’s bid for victory came undone.

While the team was changing tires on the No. 3 Corvette C8.R, a strange (and so far unclear) turn of events involving Corvette Racing’s wheel gun turned the wheel nut into a projectile. A video uploaded to Instagram by fellow GTD Pro team Pfaff Motorsports shows the Corvette’s wheel nut flying into the frame, bouncing off the roof of their 911 GT3 R and landing in the exit for the front-mounted radiator. While this impact looked innocent enough, it actually punctured the Porsche’s radiator and forced Pfaff to retire the car – netting Corvette Racing a penalty for uncontrolled equipment and forcing Garcia to take a mid-race drive-through penalty.

Luckily for Corvette Racing, a caution came out just two laps later to repair a damaged section of the Long Beach street course’s curbing, allowing Garcia to get back on the lead lap and re-enter the fight with the race-leading Aston Martin and Lexus. Garcia was unable to work his way around either of his rivals, though, and settled for third in GTD Pro and fourth among the GT entries. While the result moved Corvette Racing into the GTD Pro points lead, Garcia and Taylor lamented their bad luck in the puts post-race.

“Knowing that you had the pace and everything ran really smooth, I think we should have won,” the Spaniard said. “But I do agree that it was fair that we had a drive-through. It’s a bit of a shame. We worked very hard.”

“All things considered, it was a pretty good save for a points day,” added Taylor. “Unfortunately because we had such a strong car and I think we had a winning car, it’s tough to swallow to not maximize the points.” 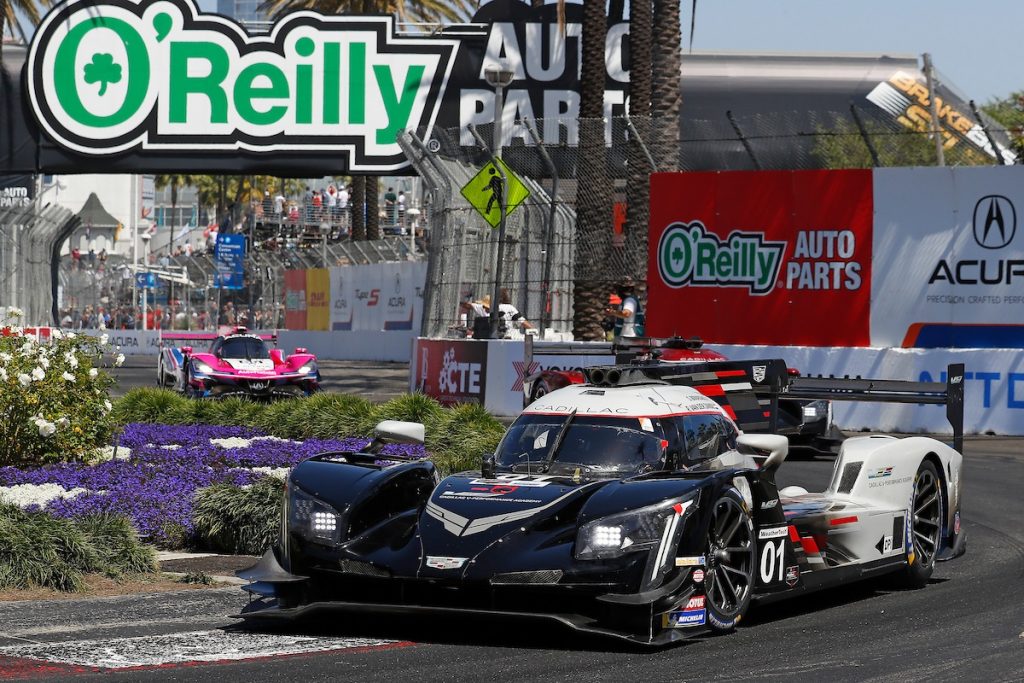 Cadillac, meanwhile, went 1-2 in the DPi class with the No. 01 entry of Chip Ganassi Racing taking the overall victory and the No. 02 car finishing in the runner-up spot. The Cadillacs also swept the podium with JDC Miller Motorsports after the No. 31 Cadillac DPi-V.R of Pipo Derani made contact with the No. 60 Acura ARX-05 of Tom Blomqvist in the final hairpin, gifting the final podium spot to former GM factory driver Richard Westbrook.

IMSA heads to Monterey next for a two-hour, 40-minute race at Laguna Seca. Click here to view full results from Long Beach.