Pulling out into a busy road from a parking lot when there’s heavy traffic can be difficult – but the vast majority of motorists can easily manage the situation by looking both ways and waiting for a gap to appear for them to pull into. Unfortunately, there are still plenty of drivers out there that don’t look both ways when pulling out into a busy roadway – just take this Chevy Silverado driver, for example.

This low-speed crash involving a Chevy Silverado and a Mercedes-Benz CLK coupe was captured on a motorist’s dashcam and uploaded to the ViralHog channel on YouTube this week. The video begins with the dash cammer stuck in a line of traffic and a parking lot entrance/exit located to their right. A red Chevy Silverado then appears, with the driver seeking to pull out into the adjacent roadway through a gap in the line of traffic.

At the same time, a Mercedes-Benz CLK is seen approaching the line of traffic, with the Silverado driver then pulling directly into the German luxury coupe’s path. The driver of the red Benz attempts to take evasive action, clipping a mailbox in the process, but ends up hitting the truck’s front quarter panel/headlight. This sends the truck into a small rotation, with the pickup coming to a perpendicular stop in front of the dash cammer’s vehicle. The pickup also clipped a woman’s blue Mazda3 amid all this, who gets out of the vehicle and appears rather upset at the damage done to her sensible Japanese compact. 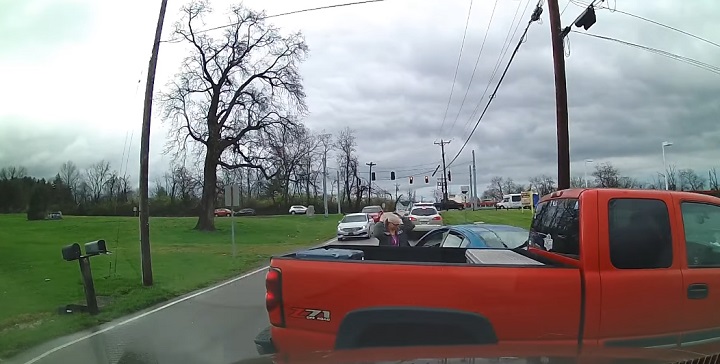 It should go without saying that this crash was the fault of the Chevy Silverado driver. All they had to do was glance to their right and this would have never happened, but alas, they elected to learn this safe driving lesson the hard way. Check out the video embedded below.