A minor hockey team from Lloydminster, Alberta has been named the winners of the 2022 Chevrolet Good Deeds Cup – a different kind of minor hockey trophy that teams earn by completing good deeds within their communities. 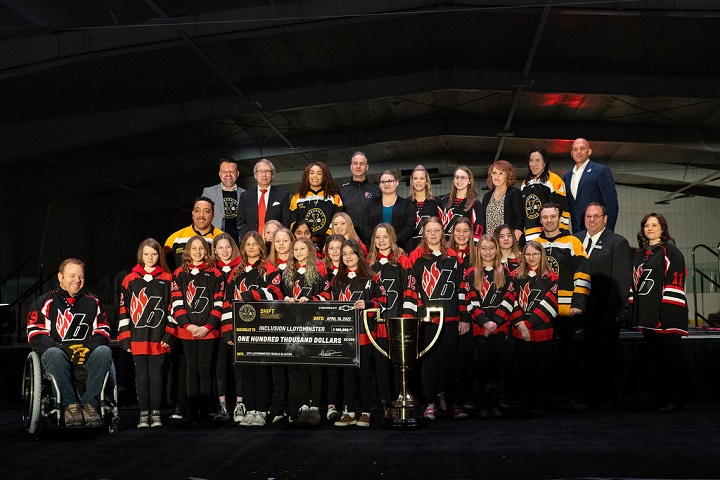 The Lloydminster Female U13 Blazers received the 2022 Chevrolet Good Deeds Cup for their plan to make the local ice rink more accessible. A video submitted by the team explained how a fully accessible rink would improve the experience for individuals with different disabilities, including a parent of a player who was unable to access the timing box to help keep time during their child’s games. The team also hosted a “try para-hockey,” event that allowed attendees to try different forms of para-hockey, raising awareness about the sport and the importance of ensuring arenas across the province are accessible for individuals with different kinds of disabilities.

In exchange for winning this year’s Chevrolet Good Deeds Cup, the Lloydminster Female U13 Blazers have received a $100,000 grand prize to donate to a charity of their choosing. The grant, provided by Chevrolet Canada, will be donated to a non-profit called Inclusion Lloydminster, which will be used to “create better accessibility in their new local rinks allowing more community members of varying abilities to play, volunteer and access the ice,” the automaker said. The team’s players will also have their names engraved on the Chevrolet Good Deeds Cup.

Nicole Drobot, Team Manager, Lloydminster Female U13 Blazers, said the accessibility upgrades that will be made to their local rink will improve the experience at the rink for some of their parent volunteers.

“Our team has a very special connection to the changes that will be made at the rink,” said Drobot. “Not only will it become better for their needs, and the needs of our parent volunteers, but it’s a stamp and legacy left behind by this truly amazing group of hockey players. We are so proud of what they have accomplished.”

The $100,000 prize was presented to the team by Ross Ulmer of local dealership Ulmer Chevrolet, who surprised the team during a handing-over ceremony by agreeing to match the $100,000 donation to Inclusion Lloydminster. Lloydminster Mayor Gerald Aalbers was also onsite to congratulate the team.