The C8 Corvette Stingray continues to be selling for well over its manufacturer’s suggested retail price (MSRP) as demand for the mid-engine sports car remains elevated.

Market research firm iSeeCars recently conducted an analysis of 1.2 million new car listings to determine which models are being marked above MSRP most often by dealers and by how much. The study found the average new vehicle is priced 9.9 percent above MSRP, but some vehicles, including the eighth-generation Corvette, are priced well above this average.

The average listed price for the C8 Corvette Stingray currently is $15,218 above the vehicle’s MSRP, or 19.3 percent. Despite the Corvette being in extremely high demand, it wasn’t even close to being the most overpriced, with this result making it the eleventh most marked-up vehicle. The Jeep Wrangler took the overpriced crown here, with this nameplate often listed for as much as 26.7 percent above its MSRP. 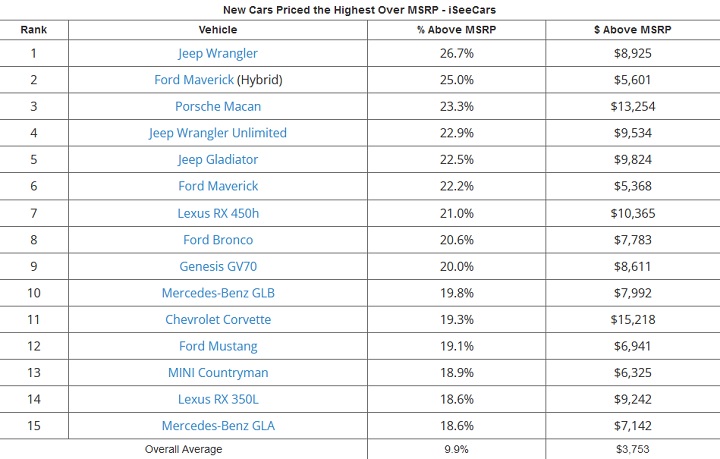 iSeeCars lead analyst Karl Brauer says the production setbacks that have plagued the C8 Corvette since its arrival for the 2020 model year have compounded with high demand to drive the vehicle’s list price up significantly.

“Demand for the mid-engine Chevrolet Corvette has exceeded supply since its launch for the 2020 model year, and its high demand contributes to the vehicle consistently selling over MSRP,” Brauer explained.

As outside factors like the COVID-19 pandemic and the semiconductor chip shortage continue to impact vehicle production output, it’s highly unlikely that new vehicle prices will drop any time soon. That means that car buyers, including hopeful future C8 Corvette Stingray buyers, should expect to pay over MSRP when they get to the dealership.

“New car buyers will probably have trouble finding available inventory and can expect to pay higher-than-average prices for vehicles that are in high demand,” Brauer added. “New car shortages are expected to persist due to the backlog of demand, and the Russia-Ukraine conflict has led to factory shutdown and pricing increases on raw materials.”

Brauer says the best way for consumers to avoid paying over MSRP on a new vehicle is to “consider similar vehicles that may not have the same degree of price hike.” While that’s a great strategy for would-be crossover or pickup truck buyers, there’s unfortunately no comparable alternative to the mid-engine Corvette with its near-500 horsepower engine and sub-$100,000 price tag.