General Motors’ brand Chevrolet is among the major automakers that consumers trust most to develop safe autonomous vehicles, according to a recent study conducted by AutoPacific.

AutoPacific recently conducted a survey to gauge consumer sentiment towards autonomous vehicles, surveying over 600 licensed drivers aged 18-80 in the United States on their feelings toward self-driving vehicles and which companies they’d trust most to develop and safe and effective autonomous driving technology.

When asked which brand they trust the most to develop “safe and reliable” autonomous vehicles, roughly 32 percent of respondents said Tesla, making it the most trustworthy brand among consumers who participated in this study. Second was Toyota with 19 percent, followed by BMW at 18 percent and Chevrolet at 16 percent. 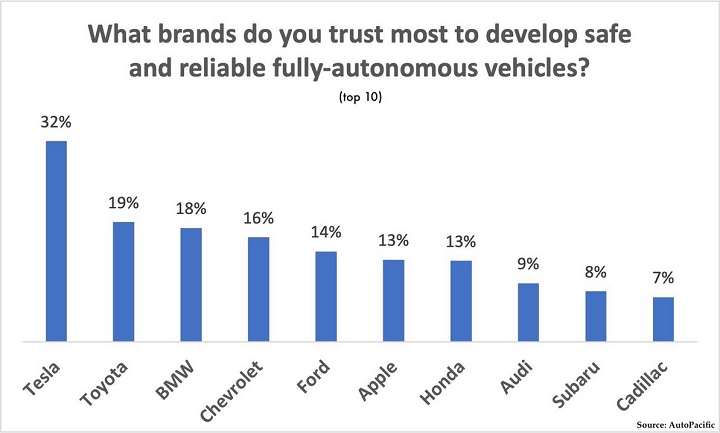 AutoPacific researchers believe Tesla led the way in this study as it often generates news headlines, both good and bad, over its Full-Self Driving assistance feature.

“This likely can be credited to much more ‘buzz’ surrounding the automaker’s pricey and controversial Full-Self Driving driver assistance tech in which current Tesla owners are able to sign up as volunteers and help demo the Level 2 semi-autonomous hands-free capability for Tesla’s own R&D efforts,” the research firm said.

The company’s researchers noted that both Chevrolet and Ford offer Level 2 hands-free driving assistance in their products currently, giving them some credibility among survey participants. Toyota also offers its own Level 2 semi-autonomous driving system on the hydrogen Mirai and the latest iteration of the Lexus LS, but has yet to roll it out to more mainstream models like the Prius or Corolla.

Cadillac was among the top-cited brands for developing autonomous vehicle technology, as well, with seven percent of survey participants selecting the GM luxury brand as their most trusted. While GM’s Super Cruise Level 2 system is now available on the Chevy Bolt EUV, it was Cadillac that introduced this technology on its CT6 full-size sedan.

Another interesting takeaway from the study was that Apple found itself among the brands that consumers trust most to develop AV technology, despite having never built a car. This would suggest that many consumers view AVs as a tech feature that Silicon Valley is more or just as likely to develop as effectively as Detroit is.

GM is arguably the furthest along when it comes to deploying driverless vehicles on public roads through its Cruise subsidiary. The automaker will begin building its fully driverless Cruise Origin robotaxi at its Factory Zero plant in Detroit next year and will deploy the vehicles on public roads in the U.S. as part of a ride-hailing business venture. It recently received a permit from the California Public Utilities Commission (CPUC) that enables Cruise to collect fares from passengers, as well, placing it one step further toward rolling out and monetizing this technology. Cruise has major backers, as well, including Microsoft and Wal-Mart.