Hosted by GM Authority Executive Editor Alex Luft, this video was captured on the floor of the 2021 SEMA Show in Las Vegas, and covers a wealth of the details regarding the 2022 Silverado ZR2’s various features, including the exterior, drivetrain, and suspension. 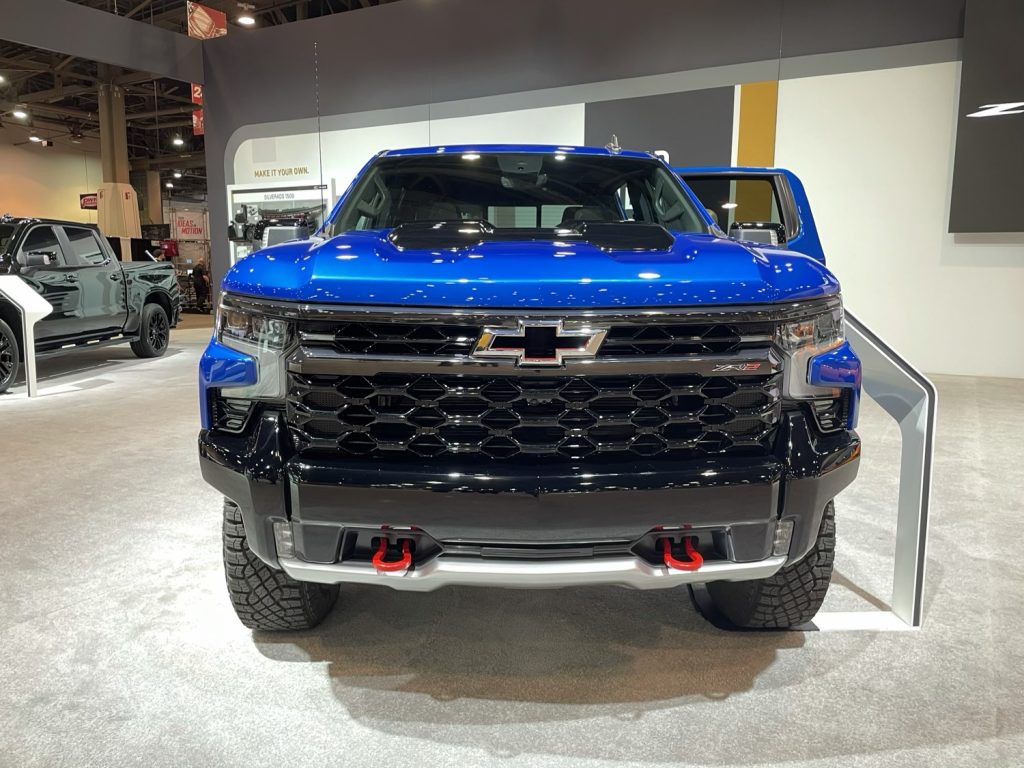 Let’s start in front, where we spot a black hood insert matched with a unique grille treatment. There’s also a Chevy Flow Tie badge with a red inlay, which complements the red tow hooks in the high-approach steel front bumper.

As an off-roader, the 2022 Silverado ZR2 also comes equipped with a unique skid plate package, while the grille contains marker lights integrated up top and lower in the fascia, plus vertical fog lights. 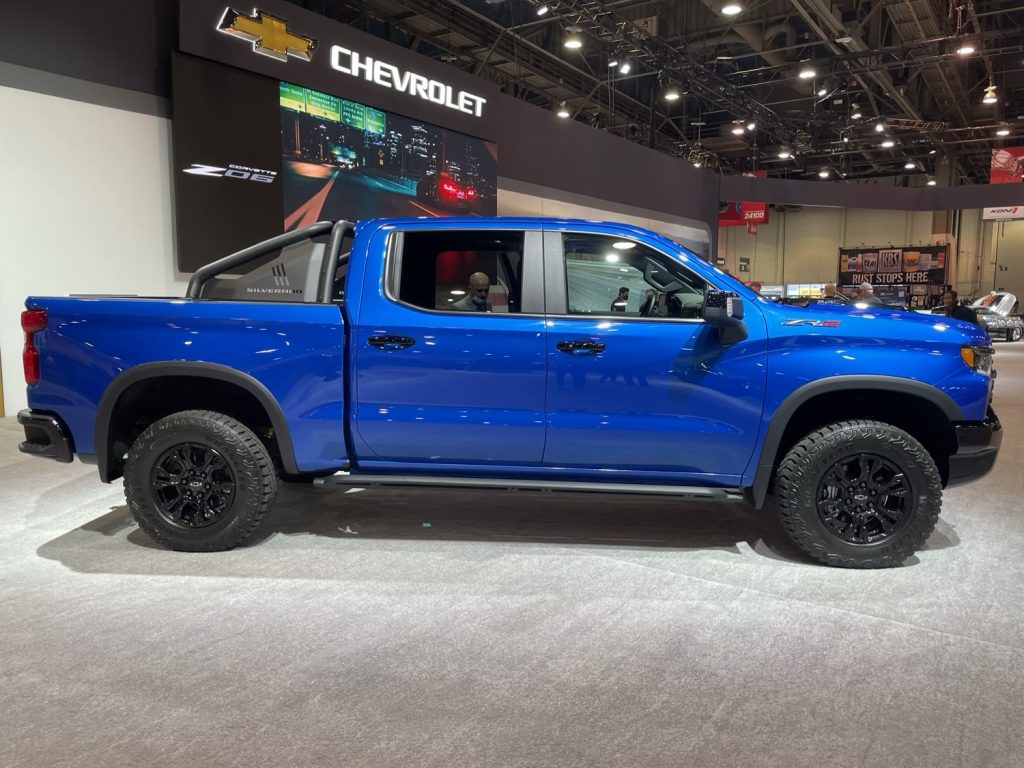 In the side, we spot black trim for the window surrounds (also known as daylight openings, or DLO). In the corners is a set of 33-inch Goodyear Wrangler mud terrain tires, which are an inch larger than the 32’s on the Chevy Silverado Trail Boss. This particular example is fitted with optional 18-inch Gloss Black wheels, as well as the optional sport bar. Black sideview mirror caps and black door handles keep the dark trim bits rolling, while optional high-clearance tubular running boards ease ingress and egress. 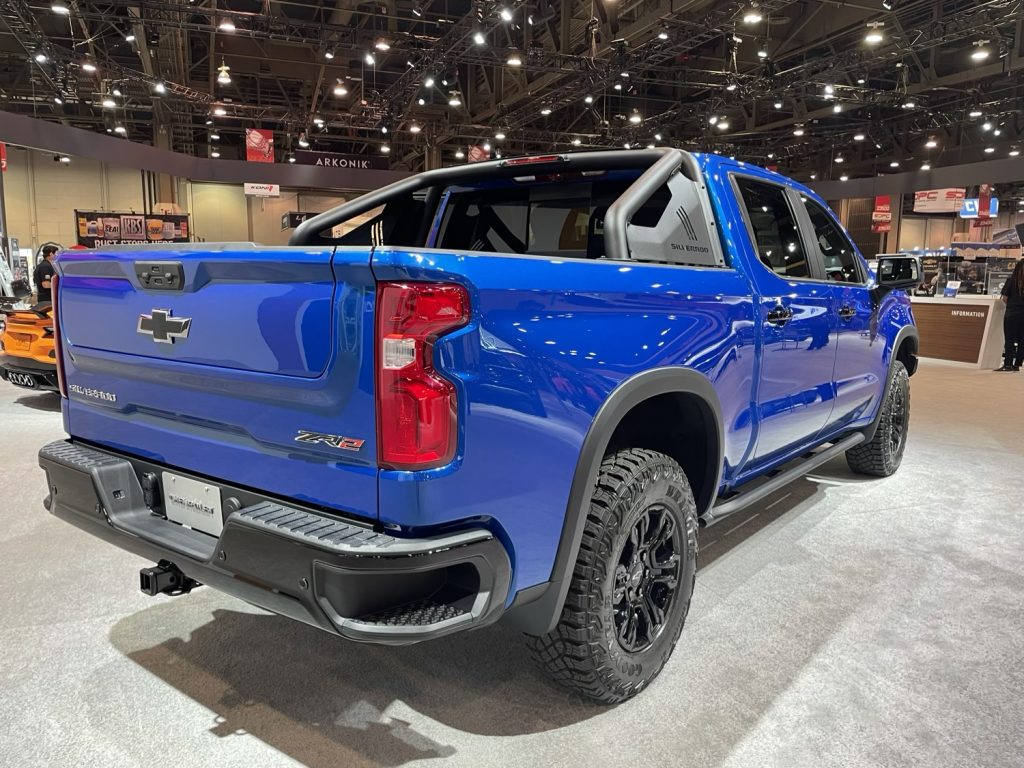 Viewed from the rear, the 2022 Chevy Silverado hides the dual exhaust pipes behind the rear bumper to enhance clearance. There’s also a glossy black rear bumper and corner step, plus a black rear Chevy badge. Usability is enhanced with the equipped six-way adjustable Multi-Flex tailgate.

ZR2 badging can be found front to back. This particular example is covered in a new paint color dubbed Glacier Blue Metallic. 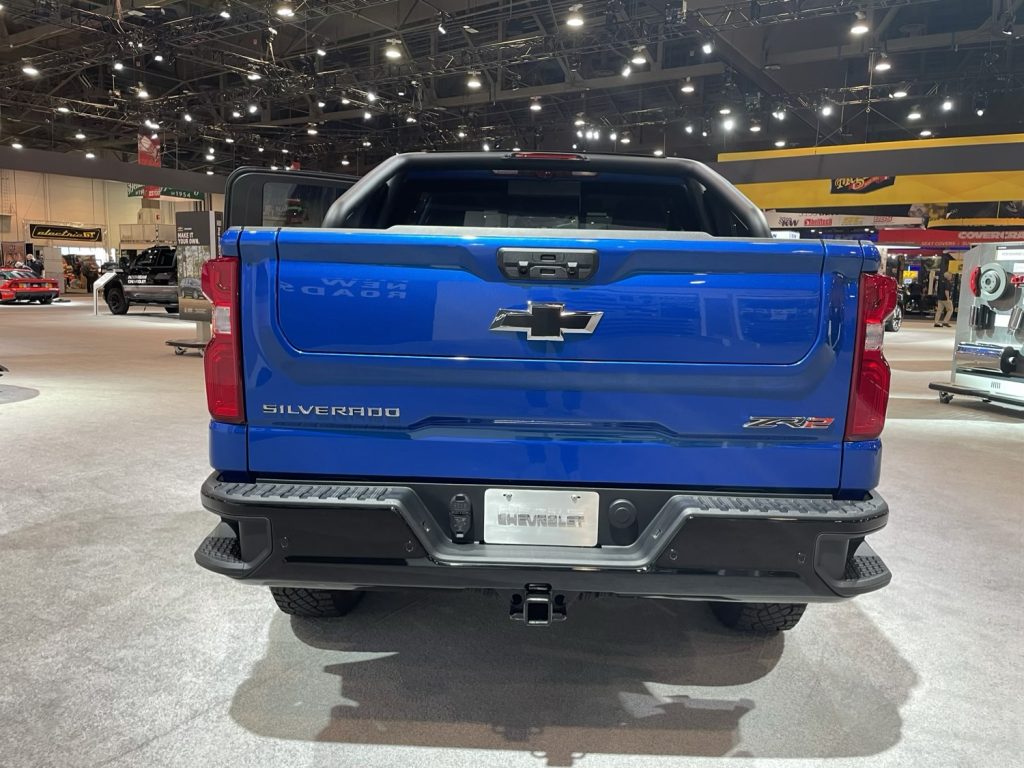 As for the greasy bits, the 2022 Chevy Silverado ZR2 features the naturally aspirated 6.2L V8 L87 gasoline engine, which is rated at 420 horsepower and 460 pound-feet of torque. Front and rear e-lockers provide extra grip, while the one-pedal rock crawling feature allows for greater control on challenging terrain. 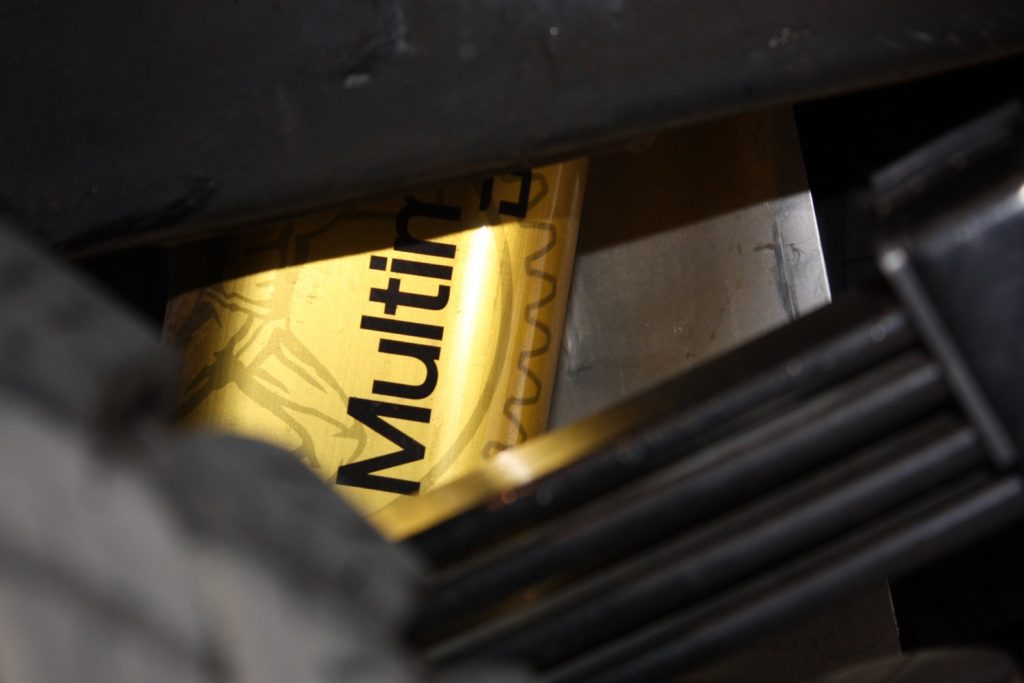 Keeping it shiny side up are DSSV Multimatic spool valve dampers, which are also standard on the Silverado ZR2’s smaller brother, the Chevy Colorado ZR2. On the Silverado ZR2, these dampers pair with uniquely tuned springs, increasing front and rear suspension travel as compared to the Silverado Trail Boss.

As a reminder, the ZR2 slots above the Trail Boss in the 2022 Chevy Silverado 1500 trim level cadence.