A set of photos showing a lime green C8 Corvette Stingray that was split in half following a high-speed crash are being circulated online this week.

The photos were posted by the Mantua Township Fire Department, based in Sewell, New Jersey, to its own Facebook page on January 22nd. The gallery shows a modified lime green C8 Corvette Stingray split clean in half, with the passenger cell sitting near a wooded area, about 15 or 20 feet away from the rear sub-assembly.

While local police have not shared any official details on the crash, it seems as though the vehicle was travelling at a very high rate of speed, as the impact ripped the 6.2L LT2 V8 engine and eight-speed dual-clutch transmission right out of the car. 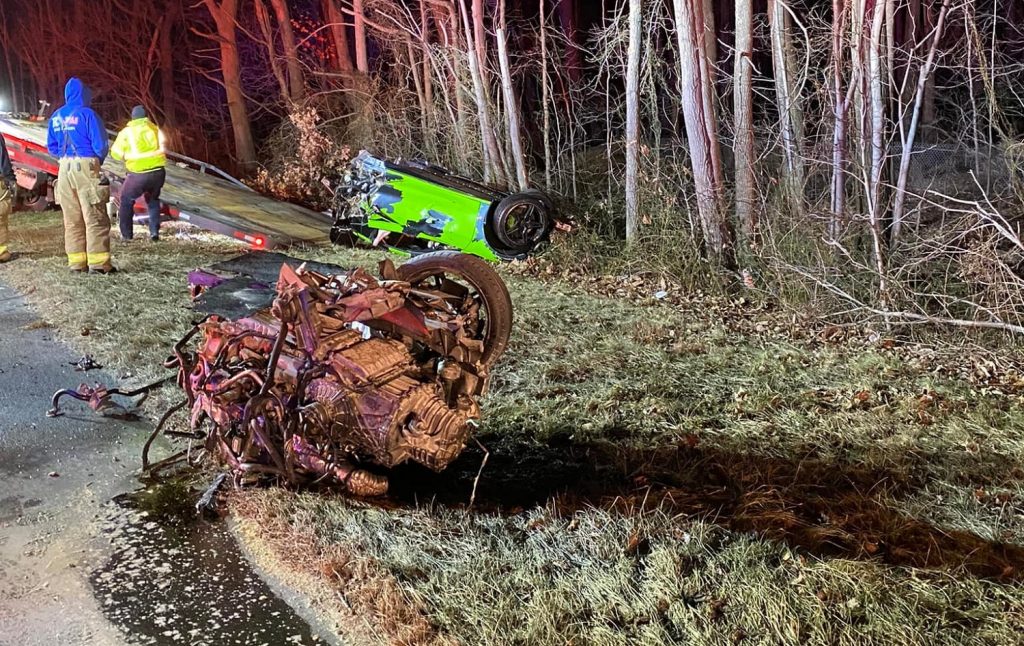 The two occupants of the Corvette were later transported to hospital with minor, non-life-threatening injuries – a true testament to the engineering prowess of the folks over at General Motors.

“During the overnight hours, Rescue 2218 responded to Route 55 in the area of mike marker 57 for a reported motor vehicle crash with entrapment and fire,” the fire department said in the Facebook post. “Crews arrived and were able to remove the patients inside the vehicle as well as extinguish the engine that was on fire. All patients were transported to local hospitals with non-life-threatening injuries. The crash is currently under investigation by the New Jersey State Police.”

A user shared a photo they had taken of the lime green C8 Corvette earlier that same day in the comments of the fire department’s Facebook post. Judging by this photo, the car appears to have been fully repainted in the eye-popping lime green color, rather than vinyl wrapped, while the brake calipers were also painted lime green to match. The car features the optional GM High Wing Rear Spoiler as well, and appears to have left the factory with the optional Z51 Performance Package.

It’s possible the owner of this vehicle owned it for only a handful of months before totaling it. Ciocca Corvette, a high-profile Chevy dealer located in Atlantic City, New Jersey, shared a photo of an identical-looking lime green C8 Corvette to its Instagram page back in October, which indicated the vehicle was available for purchase. If this is indeed the same car, it seems as though the owner may be paying Ciocca Corvette another visit in the near future.