Heavy snow is falling across the U.S., leading to delays and road closures, not to mention a whole mess of headaches as motorists cope with the icy conditions. Unfortunately, this lifted Chevy Silverado is among those vehicles that can’t quite get to grips, seen in the following brief video clips fighting for traction on a snow-covered street. 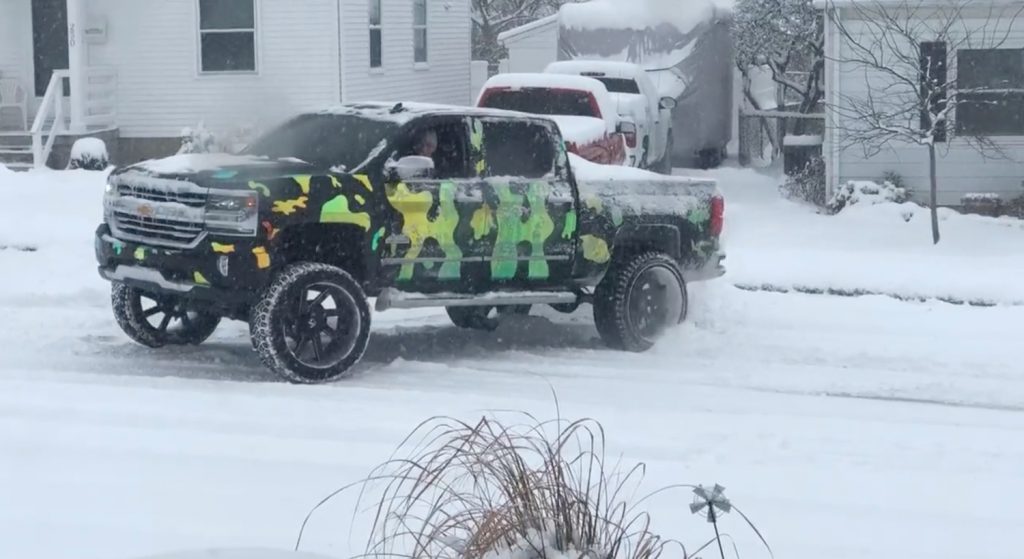 Recently posted to Twitter, the first video clip is just 10 seconds long, and shows a customized Chevy Silverado spinning its rear wheels as it attempts to climb up a snowy street. More snow is falling, and the pavement is completely covered with the stuff.

While less-than-ideal, we’ve seen worse conditions. Nevertheless, this Chevy Silverado doesn’t quite have what it takes to claw its way up the hill. Although the truck has been customized with a considerable suspension lift, a vinyl exterior wrap, and new running gear, the rear tires can’t find a foothold to get the large pickup moving.

Lol some dude in his ridiculous tonka truck can’t make it up the little hill on our street. pic.twitter.com/qm9OJO5ORf

Notably, the vehicle owner elected not to remove the snow in the back of the pickup, which in theory should help with traction, but unfortunately, it’s simply not enough to get the Chevy Silverado successfully up the hill.

In the next video clip, we see the Chevy Silverado at the bottom of the hill, where, according to the user that posted the video, the driver “surrendered” and instead elected to find a new way to get where they were going – presumably without any hills.

He surrendered and drove in reverse back towards Broadway. pic.twitter.com/5SNkI5H72s

While this custom Chevy Silverado certainly looks impressive, it clearly doesn’t have what it takes to tackle the snowy conditions. The fact that it’s rear-wheel drive, rather than four-wheel drive, is part of the issue. However, the most impactful part of all this are the tires, as whatever rubber is fitted to those custom wheels isn’t up the task of winter driving.

For those 2022 Chevy Silverado and 2022 GMC Sierra owners looking to avoid a similar fate, check out GM Authority’s previous coverage of which Silverado tires and Sierra tires are compatible with snow chains.