By comparison, shares of GM’s cross-town rival, Ford Motor Company, increased 17.67 percent, or $3.67 per share, during the same timeframe.

The biggest impact to GM stock value this week was with the introduction of several new GM EVs in conjunction with the 2022 Consumer Electronics Show, highlighted by the 2024 Chevy Silverado EV. GM stock value rose to a record high of $67.21 per share following a keynote speech delivered by GM CEO Mary Barra. Further announcements at CES 2022 included the Chevy Equinox EV and Cadillac InnerSpace AV concept.

Following the event, Barra indicated that reservations for the Silverado EV RST First Edition were filled in just 12 minutes.

Prior to CES 2022, GM stock value was up to a record $65.98 per share following the release of GM’s Q4 2021 sales report, rising on the news of better-than-expected sales numbers and optimism regarding improvements in the global microchip shortage.

Notably, General Motors is no longer the number-one automaker in the U.S. in terms of sales, ceding the position to Toyota after a 90-year streak. 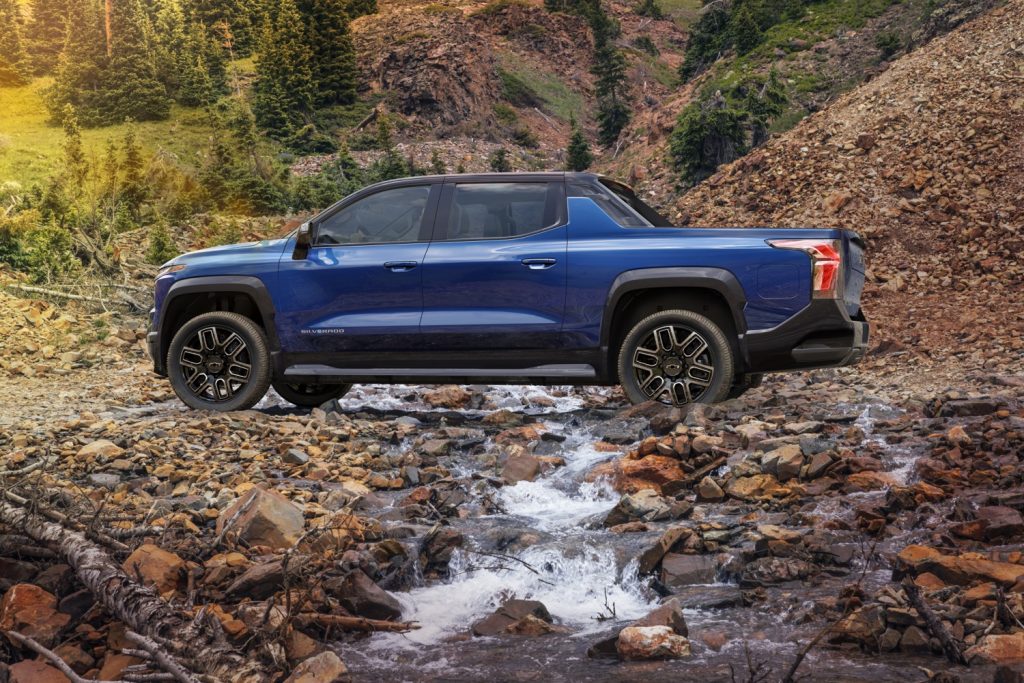 General Motors continues to drive towards the mass adoption of all-electric vehicles. Back in November, the automaker hosted the grand opening of its new GM Factory Zero production facility in Michigan, GM’s first dedicated all-electric vehicle assembly plant. The first product to roll of the line is the 2022 GMC Hummer EV Pickup. GM CEO Mary Barra rang the NYSE opening bell from the factory floor the morning of the plant’s opening, and President Biden visited for a tour, driving the new Hummer. GM stock value rose to $65 per share following the opening. GM later revealed that reservations for the GMC Hummer EV rose considerably in November following the media event.

During the previous GM Investor Day event, GM announced several future plans regarding its business, strategy and products. It expects to double its revenue by 2030 through new software platforms and connectivity, as well as the integration of OnStar Insurance with the vehicle purchase process.

To help ramp up EV production, GM has announced a new joint venture with POSCO Chemical to process materials for the automaker’s Ultium batteries. Construction of the Ultium Cells battery plant in Tennessee is currently on schedule. GM is also exploring the possibility of manufacturing EVs in Egypt.

Thanks to the incorporation of Ultium batteries and Ultium Drive powertrains in its electric and autonomous vehicle strategy, investor firm Tudor Pickering raised its GM stock price target from $75 to $95.

Back in 2020, GM CEO Mary Barra shared the company’s plan to launch a total of 30 new electric vehicles globally by 2025, with a total investment of $7 billion. To put that in perspective, 40 percent of GM’s offerings will be fully electric by the end of 2025, compared to just three percent in 2021. GM CEO Mary Barra has also stated that General Motors could catch up to Tesla in EV sales by 2025, while announcing plans to build 40,000 new charging stations throughout North America. GM has also made a commitment to phase out fossil fuel vehicles by 2040. 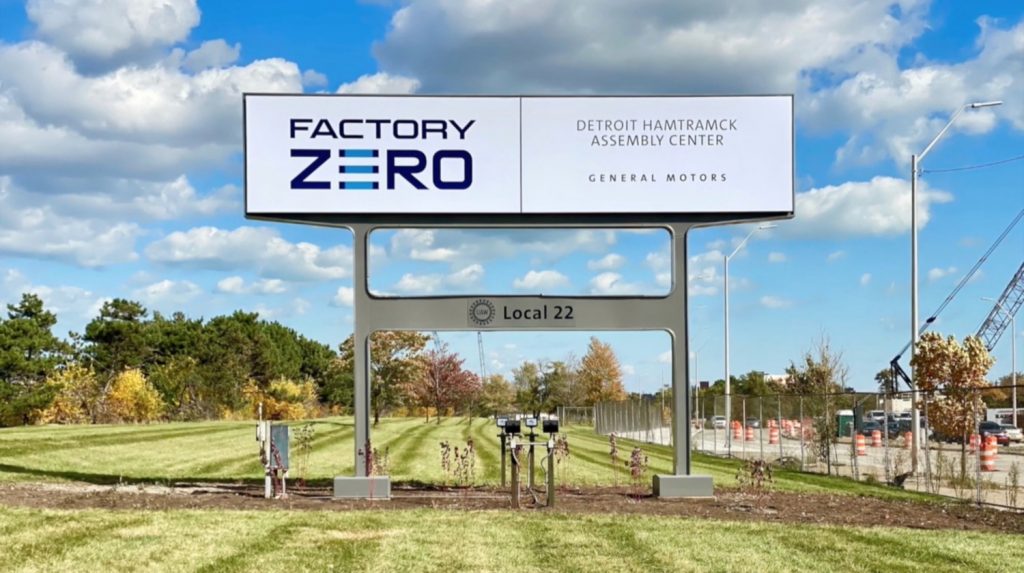 GM previously announced an increase in EV and AV investment, with a whopping $35 billion earmarked between now and 2025. More recently, GM laid out its plans to roll out new software such as the Future Roads data platform, enhanced subscription services, and the expansion of the OnStar Insurance service to all 50 states by 2022. GM’s Cruise autonomous vehicle brand is expected to rake in $50 billion over the coming years.

On the production front, half of all GM North American and Chinese production facilities will be capable of producing electric vehicles by 2030. GM has also announced details for hotly anticipated future products like the Chevy Silverado EV, including news that production will ramp up in early 2023. 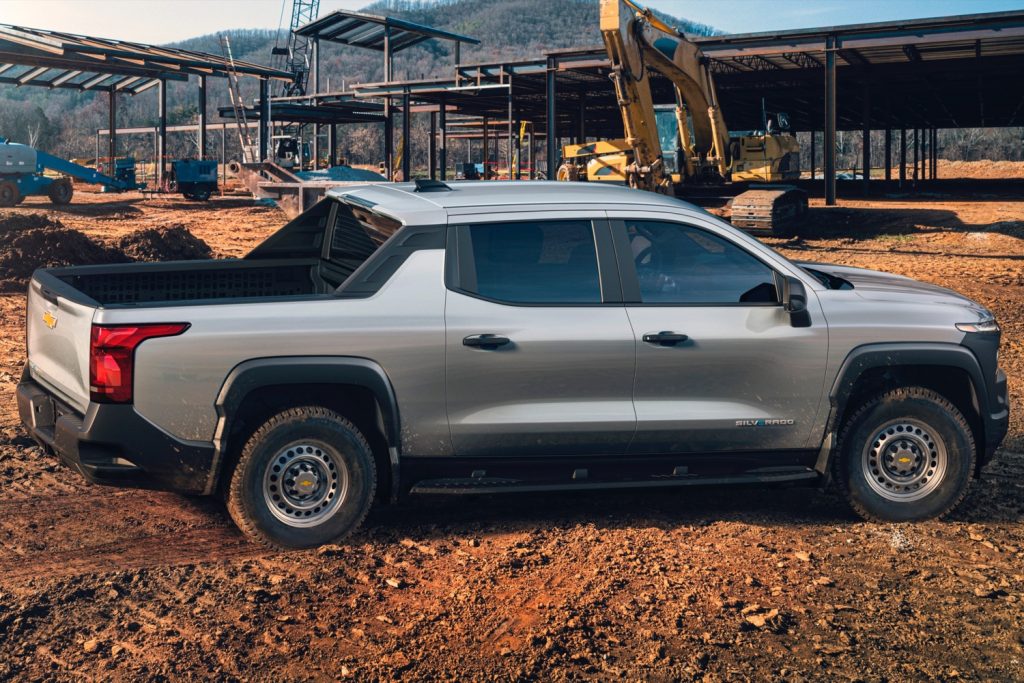 General Motors has reported its fourth-quarter sales figures, headlined by a 43-percent sales decrease in the U.S., down to 440,745 units. Sales at all four GM U.S. brands decreased, with GM saying that it focused on delivering as many high-demand, capacity-constrained products as possible in the face of record-low inventory resulting from the microchip shortage.

General Motors previously reported its third-quarter sales figures, headlined by a 33-percent decrease in sales in the U.S., down to 446,997 units. Sales decreased at all four of GM’s U.S. brands. GM cites supply disruptions resulting from the ongoing global microchip shortage, but added that supplies are “improving.” 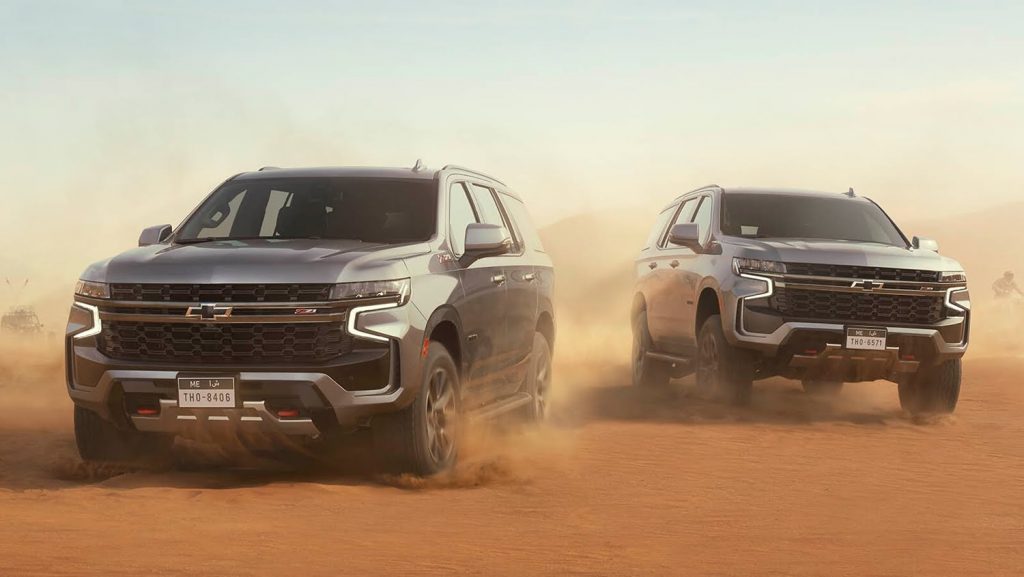 GM’s Q3 2021 earnings were headlined by $2.4 billion in income on $26.8 billion in revenue, a 40-percent decline in income and 25-percent decline in revenue. Investors reacted with disappointment to the automaker’s 2021 profit forecast in the wake of the ongoing global microchip shortage and increasing commodity prices. Some good news on the manufacturing front, though, as GM recently raised its profit outlook on the back of an improvement to the microchip shortage. GM is now running overtime at some U.S. plants as microchip supplies continue to show some improvement. 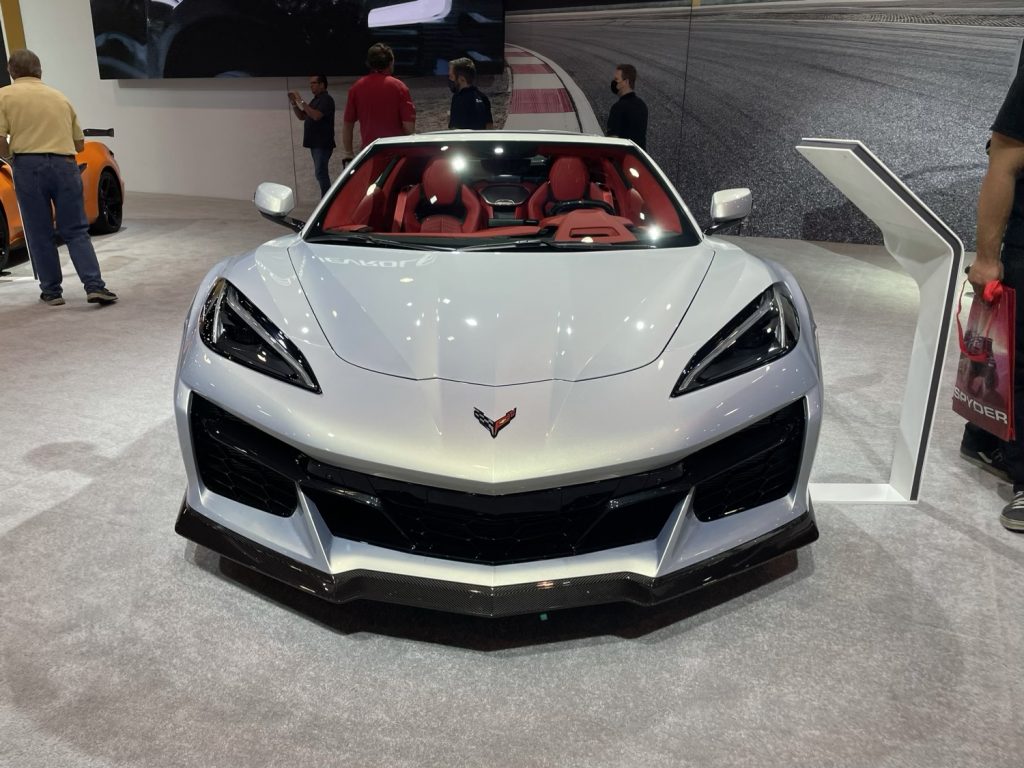 GM is now offering the BrightDrop EV600 all-electric light commercial vehicle. The new van is the fastest-developed vehicle in GM history. The EV600 will be joined by the smaller BrightDrop EV410. Merchant Fleet recently placed an order for 5,400 units of the new EV410. 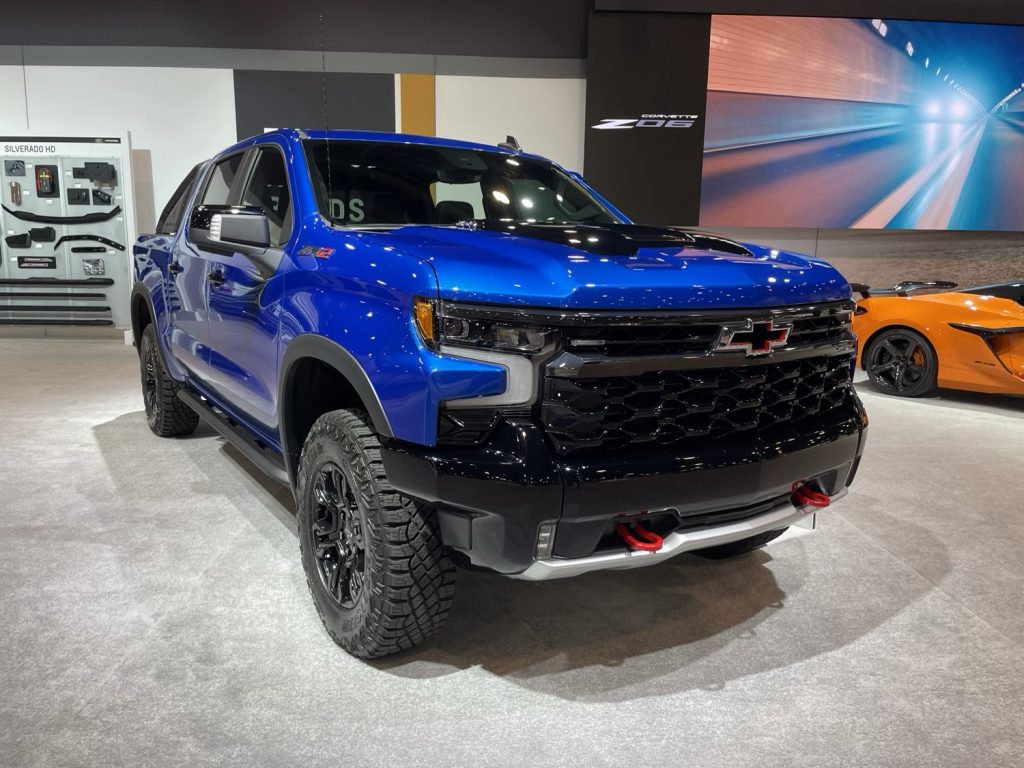 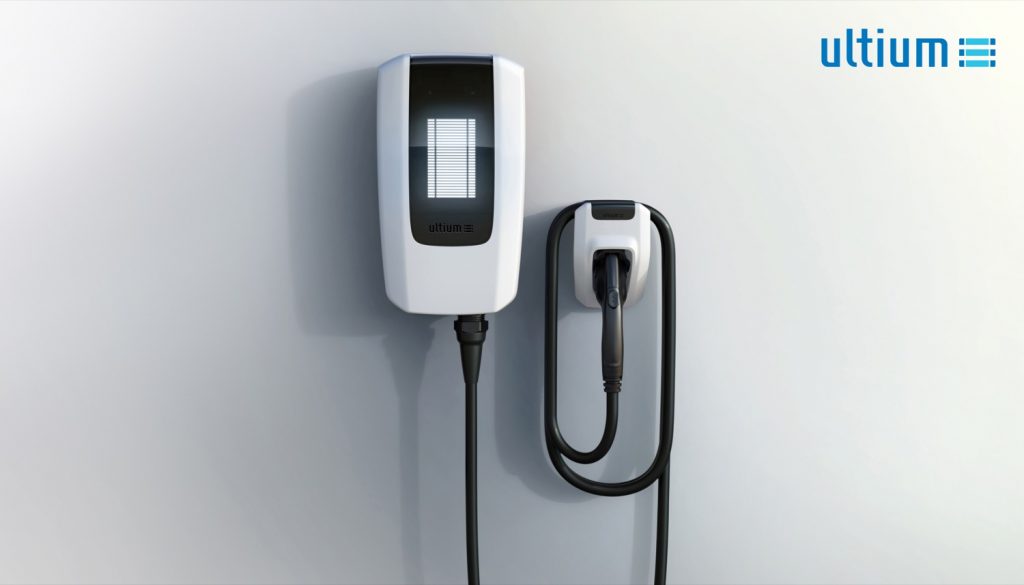 Cadillac dealerships are now preparing for the arrival of the Lyriq and future all-electric Cadillac models with a slew of upgrades. The new Lyriq is expected to enter production at the end of March.

The global microchip shortage continues, affecting GM stock value by impacting production, vehicle supply, and pricing. A recent analysis predicts that the shortage may end up costing the global auto industry upwards of $210 billion in lost revenue, almost twice what was originally forecast. General Motors president Mark Reuss has indicated that he expects the microchip supply to stabilize at a lower level than desired for full recovery. General Motors is also currently gearing up to make significant changes to its supply chain in the hopes of avoiding future shortages. That includes the development of new microcontrollers.

In the meantime, GM has announced that it has shipped pickup truck models stockpiled per the automaker’s “build-shy” strategy. SAIC-GM-Wuling has announced that it is developing its own microchips, which could help to soften the blow of future chip shortages. GM CFO Paul Jacobson also indicated that the chip supply is expected to even out sometime next year as suppliers catch up to demand. Experts are now predicting that the semiconductor crisis could last in 2023. 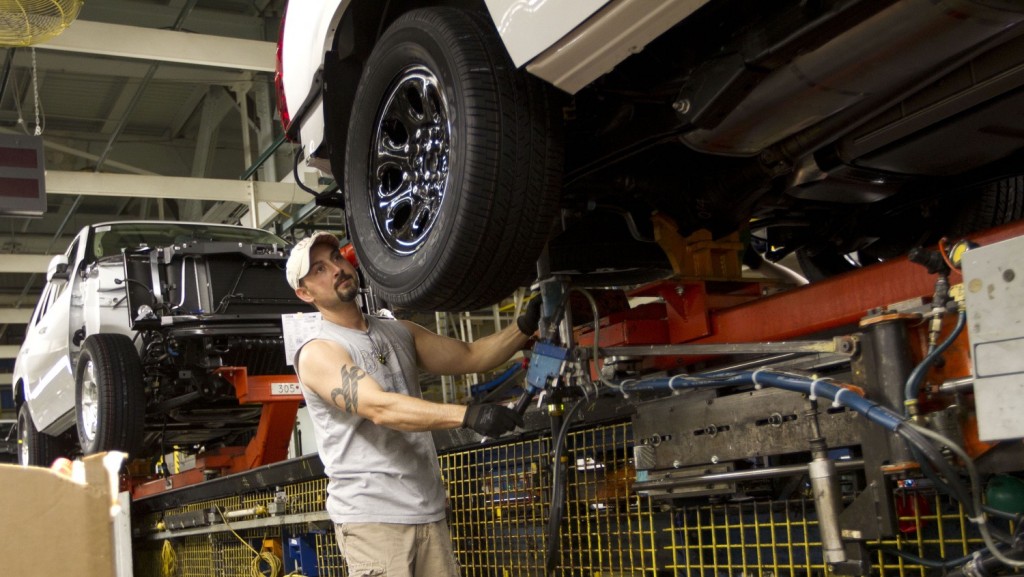 It was previously reported that GM is stockpiling unfinished vehicles waiting for new chips to arrive in a “build-shy” strategy intended to keep production rolling. Additionally, GM is building select units of the 2021 Chevy Silverado 1500 and 2021 GMC Sierra 1500 without certain fuel-saving technologies as a result of the shortage, including automatic engine stop-start. More recently, however, GM announced that production of the 3.0L I6 LM2 turbodiesel Duramax engine for GM’s full-size SUV lineup had resumed.

GM has announced that it will retrofit models affected by the deletion of certain comfort features as a result of the chip shortage, including heated seats and heated steering wheels, only to retrofit those features at a later date.

Looking ahead, strong demand for new cars is expected to continue in 2022, while new vehicle incentives are down to a five-year low amid low inventory.

GM previously announced that it will replace the battery modules on roughly 50,000 units of the 2017 though 2019 Chevy Bolt EV affected by a potential fire risk. The automaker later decided to extend the battery replacement on all model years of the Bolt EV, in addition to the all-new Bolt EUV. Despite the fault laying with battery producer LG Energy Solution, GM CEO Mary Barra announced that GM will continue its relationship with LG going forward. 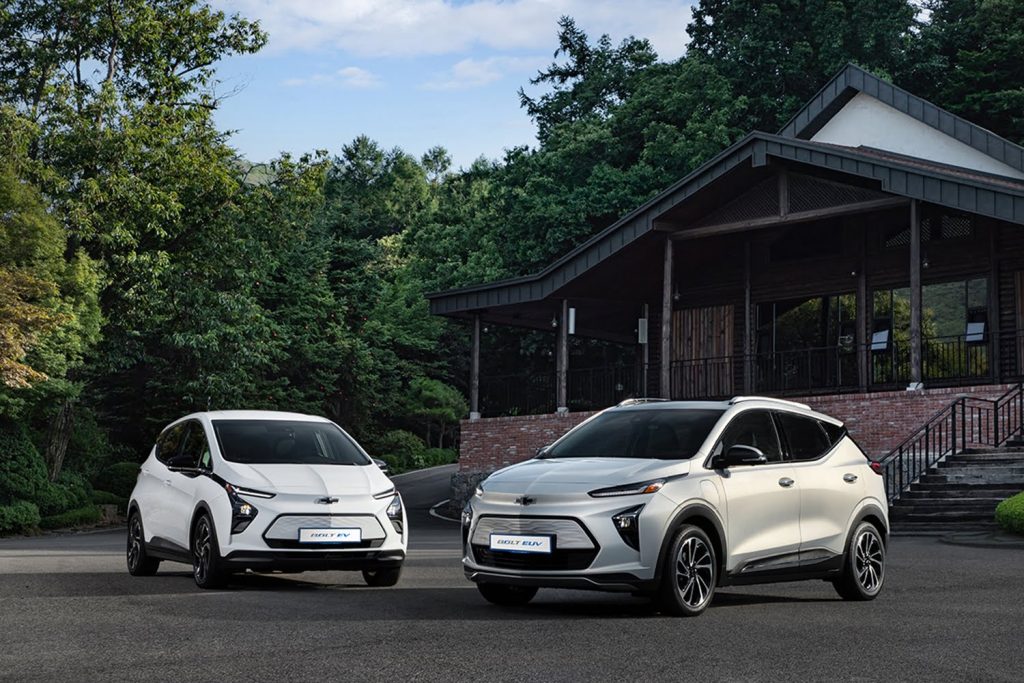 In political news, General Motors voiced support for the EPA’s proposed emissions rule changes. GM also indicated that it is on track to hit carbon neutrality for its U.S. operations by 2025, five years earlier than originally announced. The Biden administration has proposed a new EV incentive offering point-of-sale rebates on new electric vehicles, while also outlining a plan to build-out the nationwide EV charging infrastructure. California can once again set its own emissions guidelines, while the Biden administration is urging automakers to ensure that their vehicle lineups consist of at least 40 percent EVs by 2030. Biden also recently signed an executive order calling for an end to the purchase of fossil fuel fleet vehicles by 2035, while the finalization of stricter emissions requirements is expected to speed up electric vehicle adoption.

The greater auto industry, including the UAW workers union and major manufacturers like General Motors, have called on President Biden to roll out tax credits and incentives to drive EV sales. The latest is that the Biden Administration plans to roll out a $100 billion plan for new EV rebates.

GM stock value recently fell following the announcement that Dan Ammann was stepping down as CEO of the GM-backed autonomous vehicle startup Cruise. Ammann’s departure was the second high-profile executive shakeup in a week, following the departure of GM innovation head Pam Fletcher. 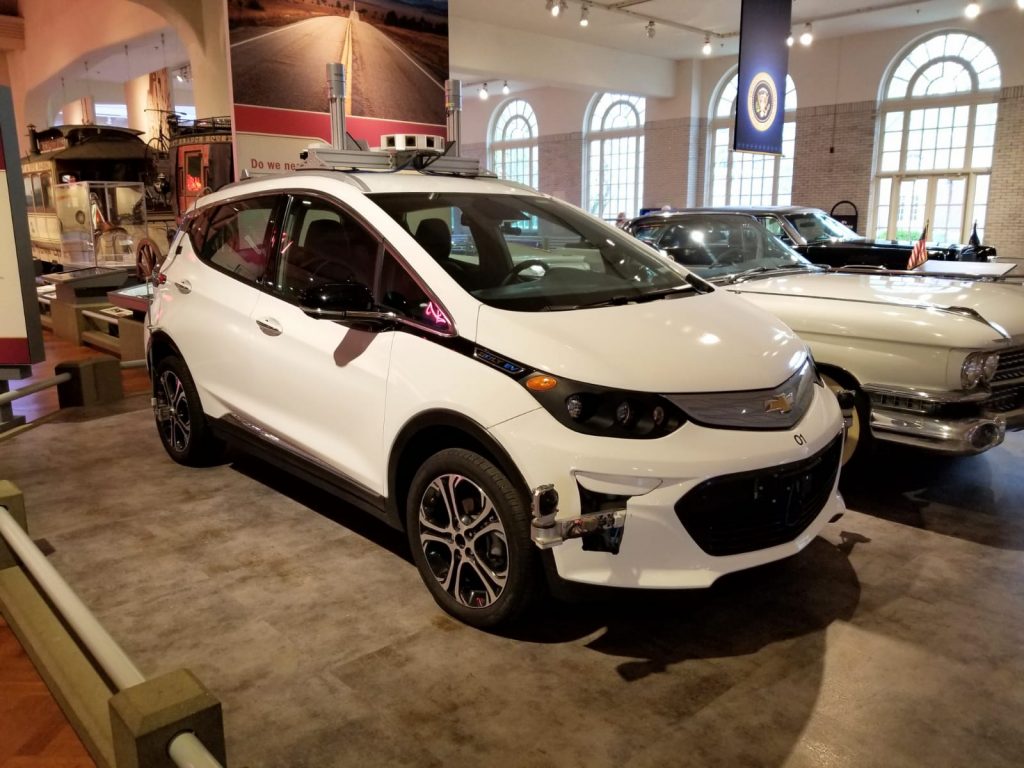 GM stock value has increased considerably over the past year, only to later rescind some of those gains and fall below the $50-per-share mark. Now, GM stock value is back on the rise, hovering around the $55- to $60-per-share mark in December before breaking into record highs in January, peaking at $67.21 following CES 2022.

GM stock value saw steady gains throughout the month of March, 2021, before dipping again later in the month, only to rise to record-breaking heights in early April, once again breaking the $60-per-share mark. GM stock value dipped through the month of May, but reached $64 per share the second week of June, setting a new record for the “new GM.”