There was no shortage of off-roader builds at the recent SEMA Show in Las Vegas, with General Motors getting in on the action with a variety of interesting vehicles, including standouts like the Chevy Off-Road concept (previously known as the Chevy Beast) and the GMC Hummer EV. Now, we’re headed back to the show floor with an in-depth look at the 2022 Chevy Colorado Z71 Off-Road Performance Edition in the following GM Authority Live Photo Gallery. 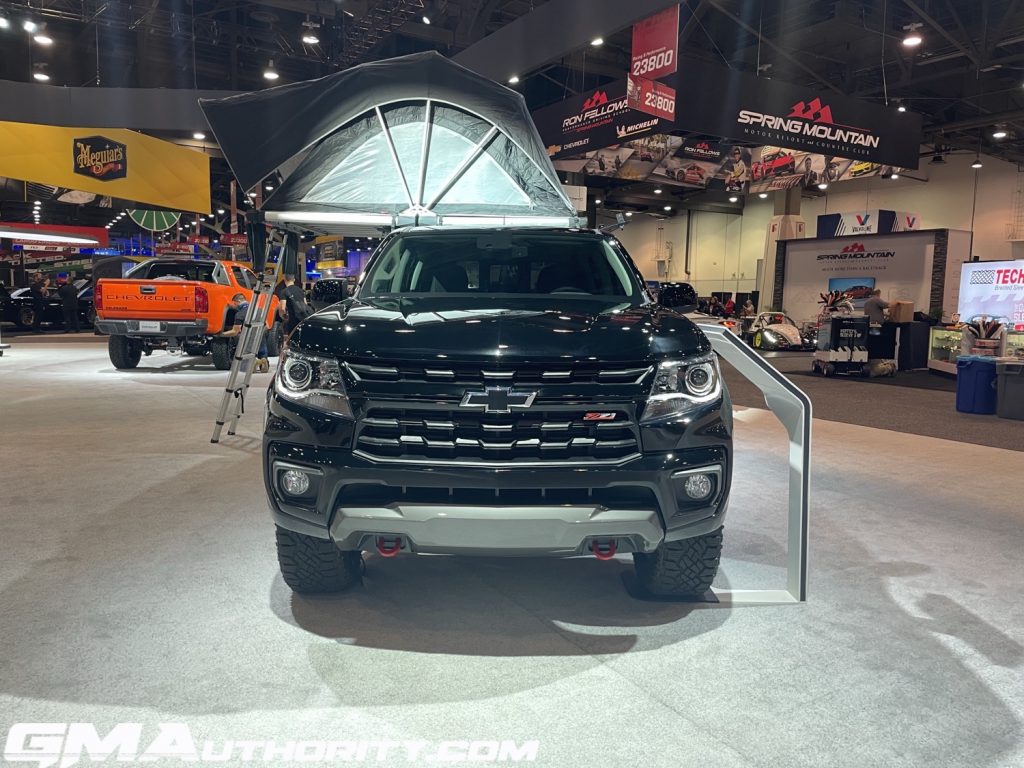 The 2022 Chevy Colorado Z71 Off-Road Performance Edition looks to elevate the Colorado Z71 to “near-ZR2” levels with a variety of Chevrolet Accessories and add-ons, creating the ideal vehicle for a weekend in nature while camping or overlanding. 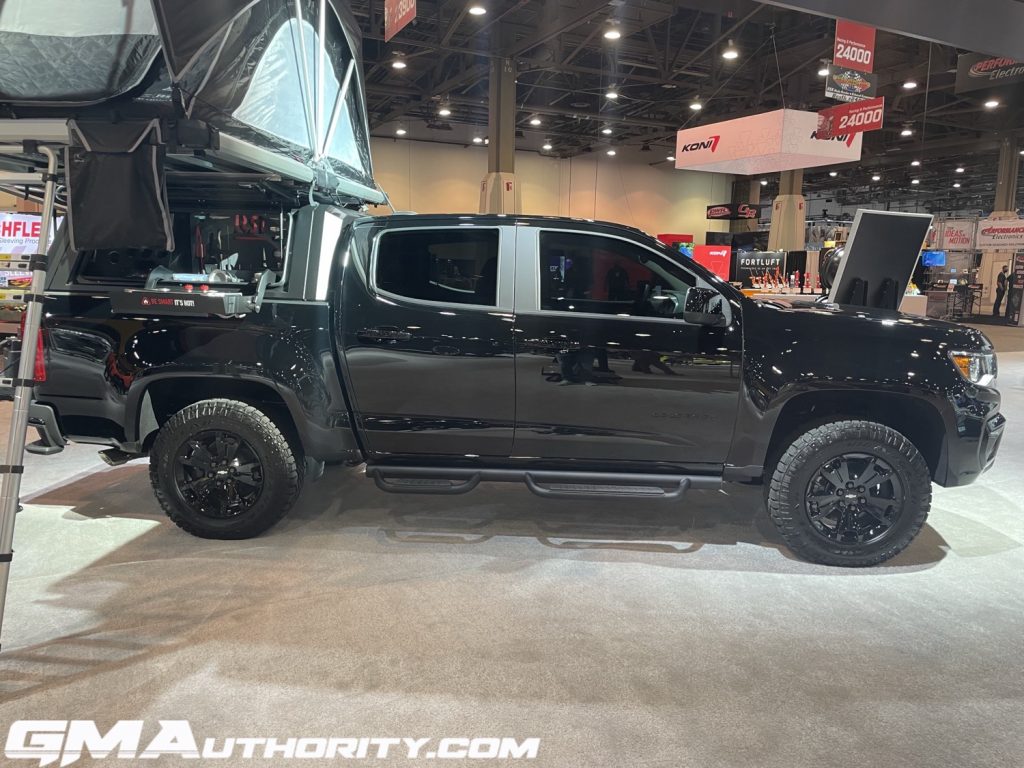 First things first, this Chevy Colorado is finished in Black paint, which is complemented by a variety of black details, such as the Black Bow Tie emblem up front. You’ll also notice the red recovery hooks in the front bumper, plus a ZR2-spec front skid plate. Further back is a ZR2-spec mid skid plate. 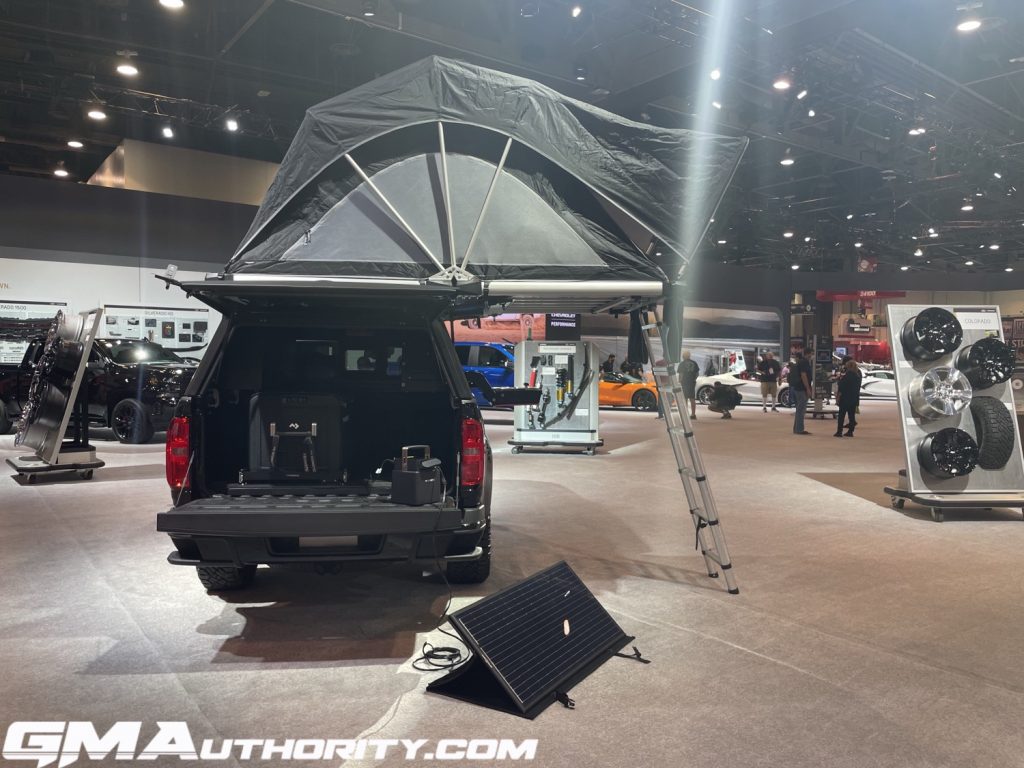 Viewed from the sides, the 2022 Chevy Colorado Z71 Off-Road Performance Edition features 17-inch by 8-inch Aluminum 5-spoke wheels in Gloss Black. On top of the pickup is a High Country 55-inch rooftop tent by Freespirit Recreation. Complementing the tent is an RSI SmartCap and RSI Load Bars. 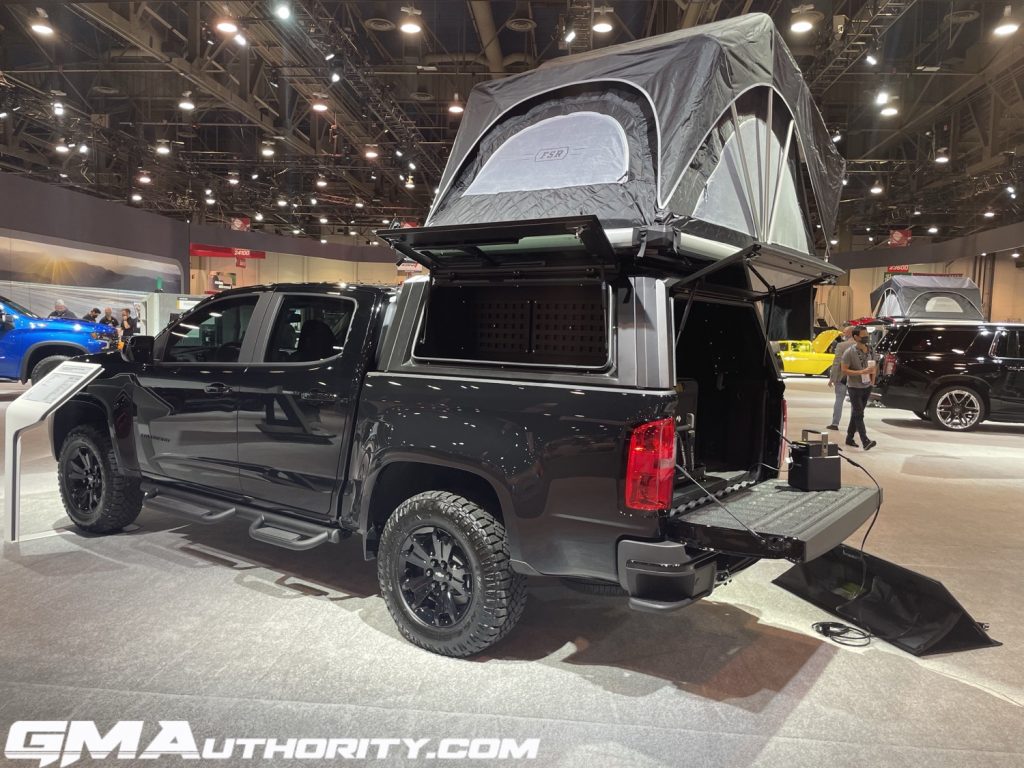 The rear of the vehicle features a spray-on bedliner, plus Crew Cab 3-inch Off-road assist steps, also finished in black. Black Colorado emblems on the doors keep the theme going, as does the Black vinyl Chevrolet tailgate lettering. 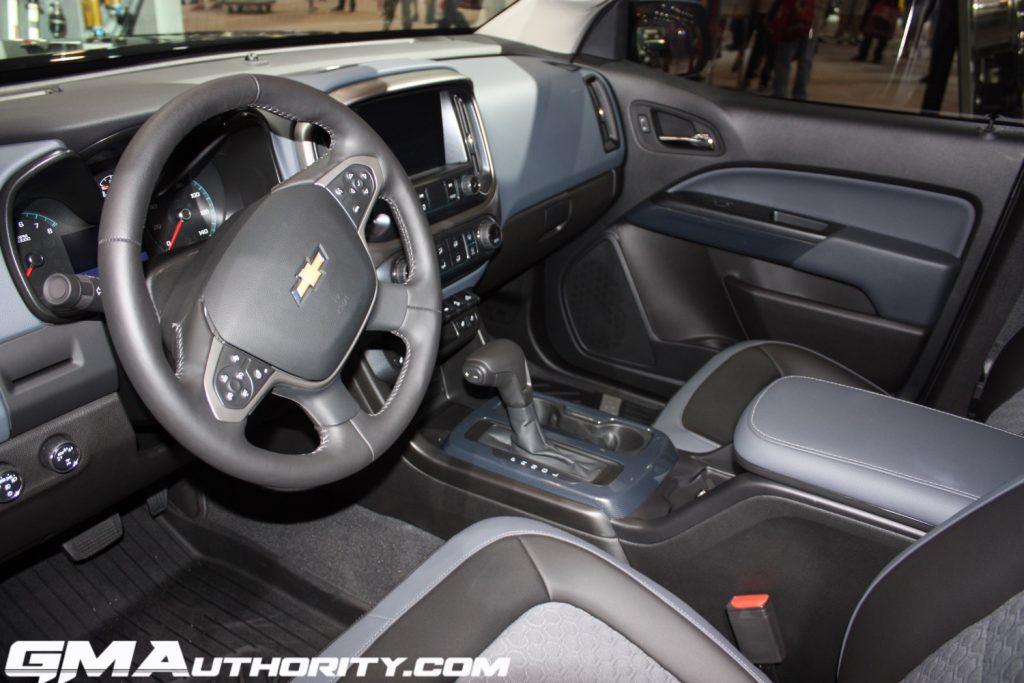 Inside, the pickup is equipped with heated driver and front-passenger seats (a hard-to-find commodity these days), plus first row all-weather floor liners. To make this rig fully equipped for a stint outdoors, the Colorado features a Camp Kitchen and Full Bin by RSI, plus a powered cooler, protective cooler cover, and lithium battery supply by Dometic. 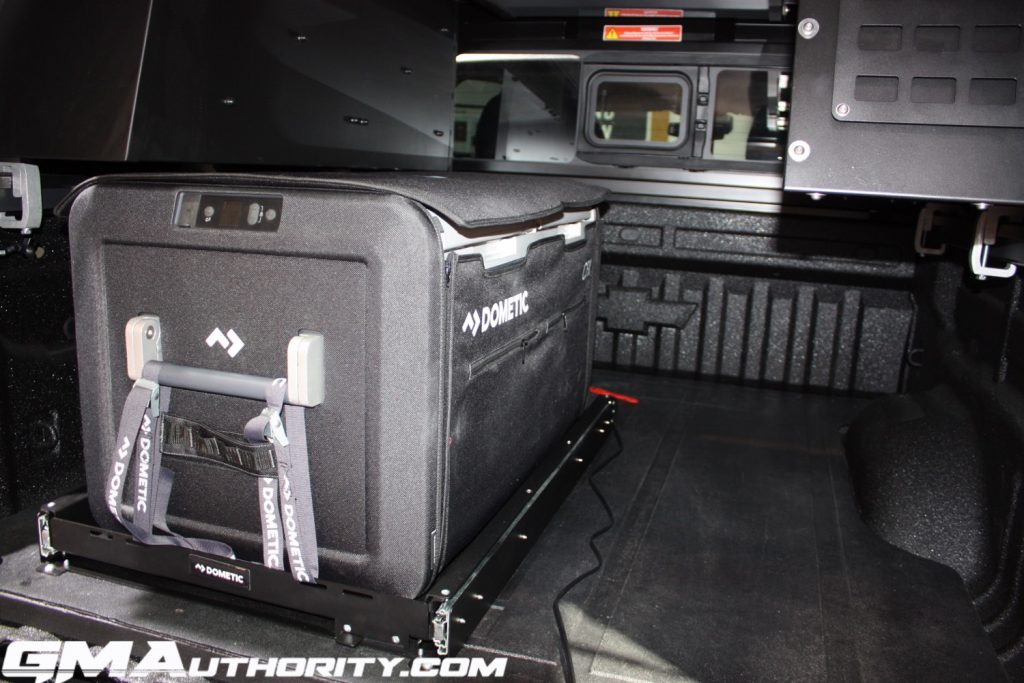 To up the truck’s prowess on the trails, the 2022 Chevy Colorado Z71 Off-Road Performance Edition features the Z71 Off-Road Suspension Package and a 1-inch leveling kit. Motivation is sourced from the naturally aspirated GM 3.6L V6 LGZ gasoline engine, rated at 308 horsepower and 275 pound-feet of torque. The truck is also fitted with a new cold-air intake and a cat-back exhaust with a polished tip, likely freeing up a few ponies in the process. 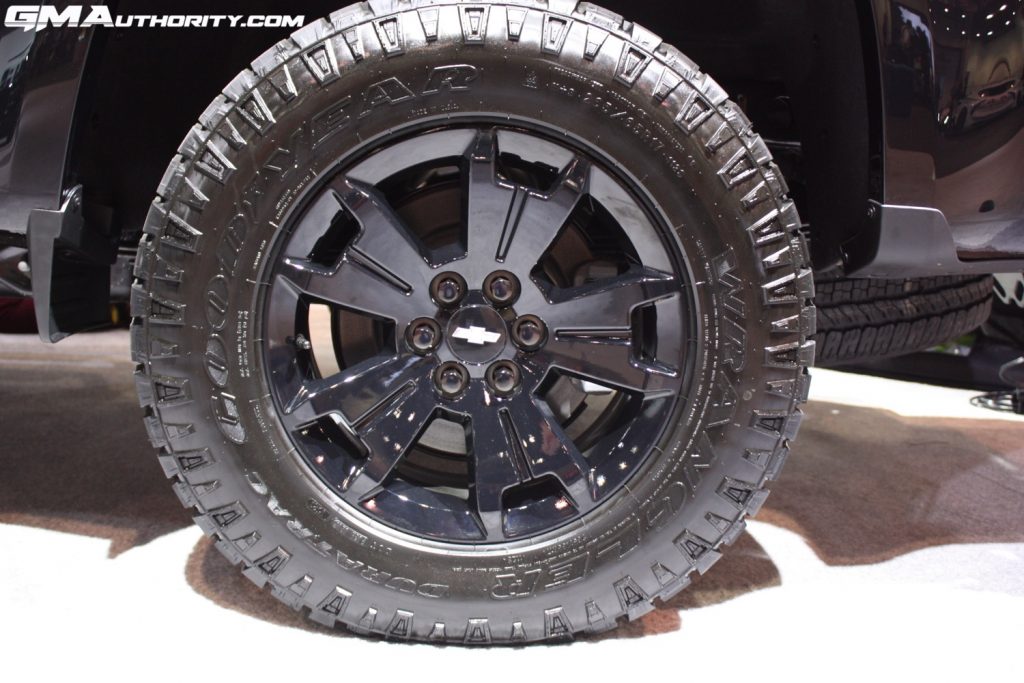 Output is routed to the ground by way of an eight-speed automatic transmission and automatic locking rear differential. 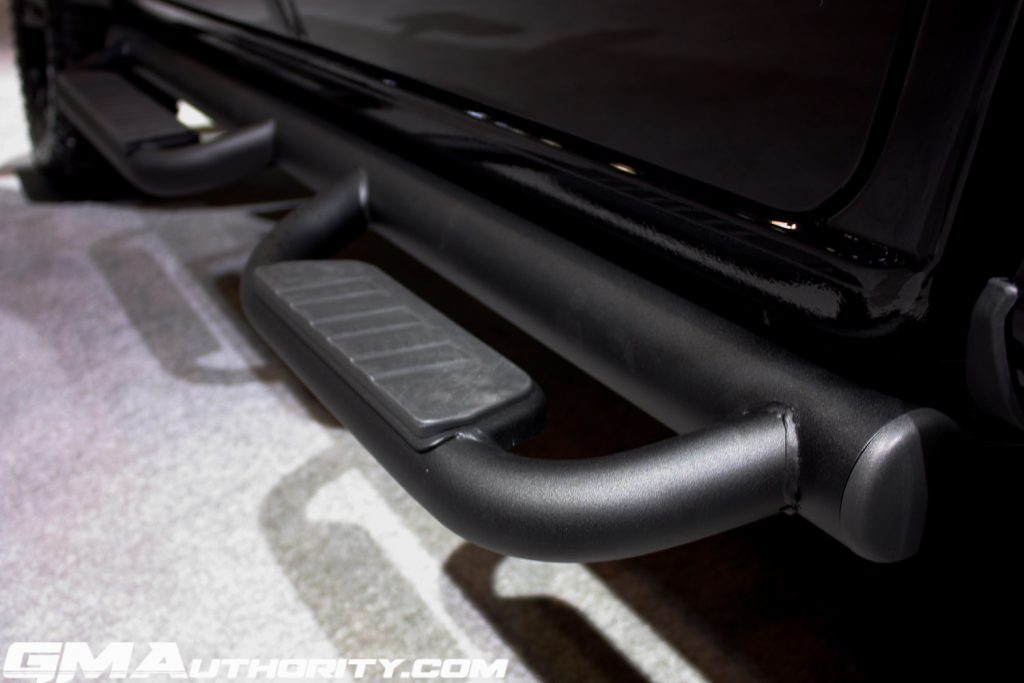 As a reminder, the Chevy Colorado is also generally offered with the 2.8L I4 LWN turbodiesel Duramax engine and naturally aspirated 2.5L I4 LCV gasoline engine, although the Colorado is currently unavailable with the LCV, as GM Authority covered previously. The 2022 Chevy Colorado rides on the GMT 31XX platform, with production taking place at the GM Wentzville factory in Missouri.