A YouTube user has uploaded a video showing a 2019 K5 Chevy Tahoe that was built by Arkansas-based customization shop Flat Out Autos.

Flat Out Autos unveiled its new K5 Tahoe back in 2019. This customized truck is exactly what the name suggests: a custom K2XX platform Chevy Tahoe with exterior styling inspired by the iconic K5 Blazer. While we’ve seen examples of Flat Out Autos’ custom K5 Chevy Tahoe painted in a two-tone white and blue color before, this is the first time we’ve seen one finished in this eye-popping, retro-inspired yellow hue. We love the way this color looks, which is unsurprising seeing as it is very similar to the factory yellow color that was offered on the original K5 Chevy Blazer. 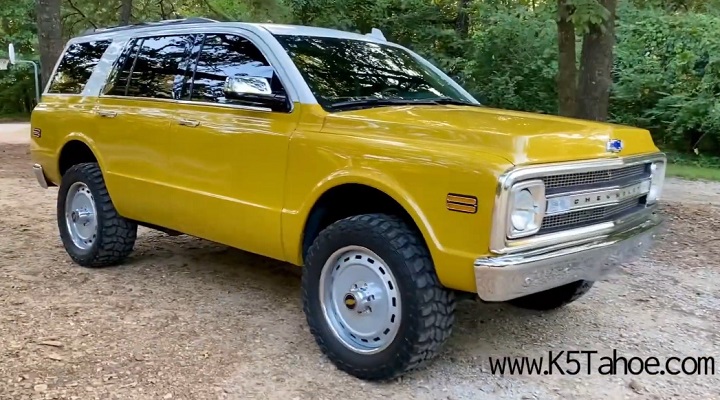 We’ve seen both two-door and four-door conversions of the K2XX Chevy Tahoe completed by Flat Out Autos, but this example is a four-door, obviously. As we can see in the video, the vehicle retains the factory Chevy Tahoe interior, complete with the factory second-row captain’s chairs and a folding third row. The standard naturally aspirated 5.3L L82 V8 engine also remains, along with the factory four-wheel-drive system and GM six-speed automatic transmission.

As we reported previously, one of these retro-inspired Chevys sold for an eye-popping $110,000 USD at a Mecum auction in 2020. It’s not clear how much Flat Out Autos charges for one of these rather well done conversions, but the Mecum auction result gives us a rough idea of how much it would cost. This may be one pricy conversion, but for some dedicated Chevy fans, having a seldom-seen Bow Tie-badged product such as this will definitely be worth the six-figure price of admission.

Check out the walkaround video embedded below.

Subscribe to GM Authority as we bring you the latest Chevrolet Tahoe news, Chevrolet news, and ongoing GM news coverage.