Earlier in December, a series of tornados hit several states in the South and Midwest, resulting in widespread destruction and an estimated 88 deaths. The storms also affected the GM Bowling Green assembly facility in Kentucky, the exclusive producer of the C8 Corvette Stingray. An estimated 115 vehicles were damaged by the storms, and now, new pictures of those damaged vehicles have emerged.

Recently posted online, the photos show several rows of C8 Corvette Stingray models lined up in a dirt lot, all of which are missing body components, with the structural components laid bare to the surrounding elements. The doors are also missing, giving us a peek at the plastic-wrapped interior bits.

Although visually these C8 Corvette Stingray units may look okay, it’s likely that moisture got into critical electronics and other components. As such, General Motors will send all of these vehicles to the crusher. 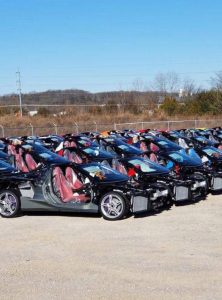 The news is likely irksome for those C8 Corvette customers still waiting for their vehicle as General Motors works through a backlog of orders to meet continuing high demand for the new mid-engine Corvette. Indeed, C8 production has been plagued with a number of setbacks ever since it was first introduced, including the 2019 UAW labor strike and shutdowns due to the COVID-19 pandemic.

While the loss of these C8 Corvette Stingrays is definitely annoying, the most important thing to remember is that no GM employees were hurt at the Bowling Green facility during the devastating storms earlier this month. That said, the high winds did damage the roof of the facility and cause a small fire to break out.

As a reminder, the C8 Corvette Stingray is powered by the mid-mounted, naturally aspirated 6.2L V8 LT2 gasoline engine, which is rated at 490 horsepower at 6,450 rpm and 465 pound-feet of torque at 5,150 rpm. Output is fed to the rear axle through an eight-speed dual-clutch transmission, while under the skin, the C8 Corvette rides on the Y2 platform.