Although some have criticized the styling, the latest sixth-generation Chevy Camaro is a head-turner, any way you slice it. Now, custom aftermarket body kit specialist Ivan Tampi is packing a powerful aesthetic punch with its new widebody treatment for the Camaro SS, as seen in the following GM Authority Live Photo Gallery. 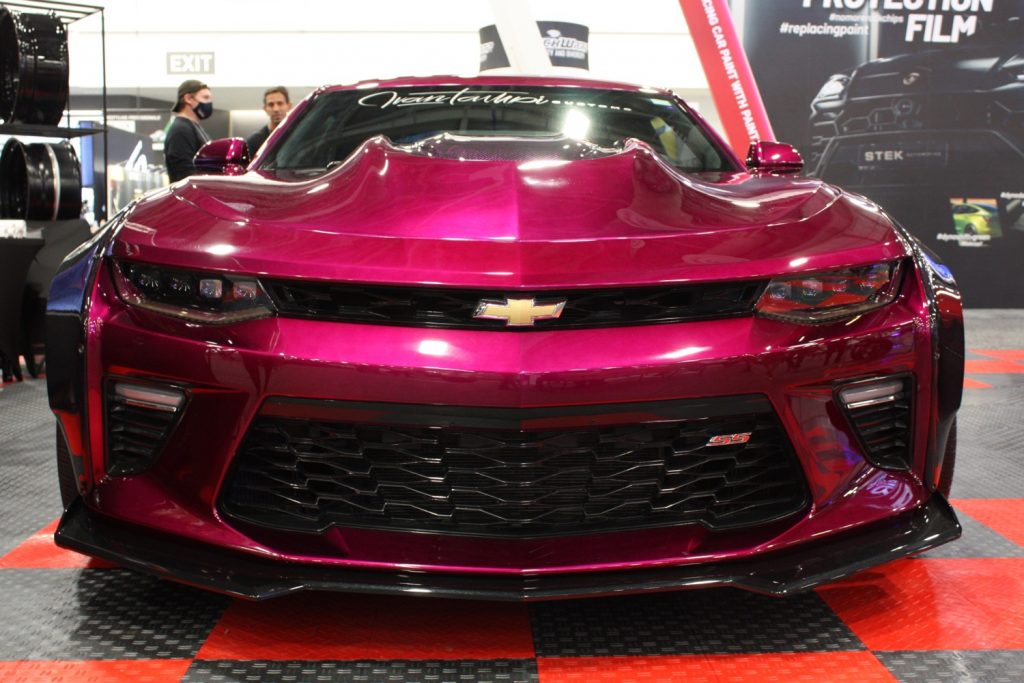 For those readers who may not know, Ivan Tampi Customs is based out of Van Nuys, California, and was founded by self-taught automotive designer and fabricator Ivan Tampi. Tampi is best-known for creating the “Black Widow” series of body kits in the early ‘90s, and now, Ivan Tampi Customs offers a variety of aesthetic enhancements for vehicles like the C7-generation Chevy Corvette. 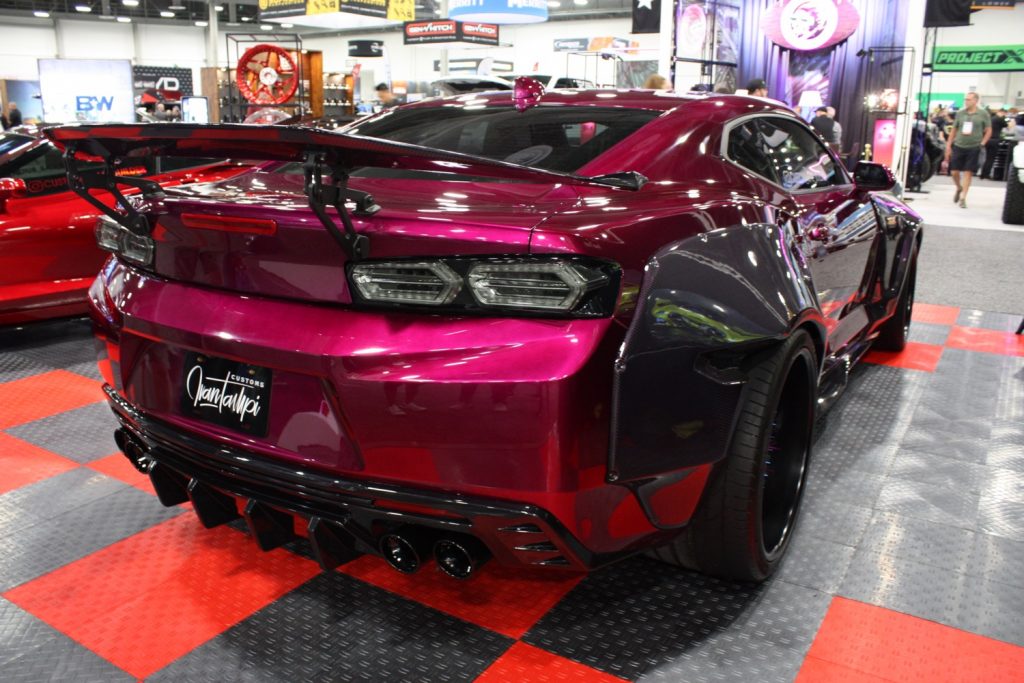 One of Ivan Tampi Customs’ latest products is this new widebody treatment for the Chevy Camaro, which includes a series of components from the company’s “XIC” line of body upgrades. Spotted on the floor of SEMA 2021, the new body kit transforms the Chevy Camaro into a candy-colored knockout. 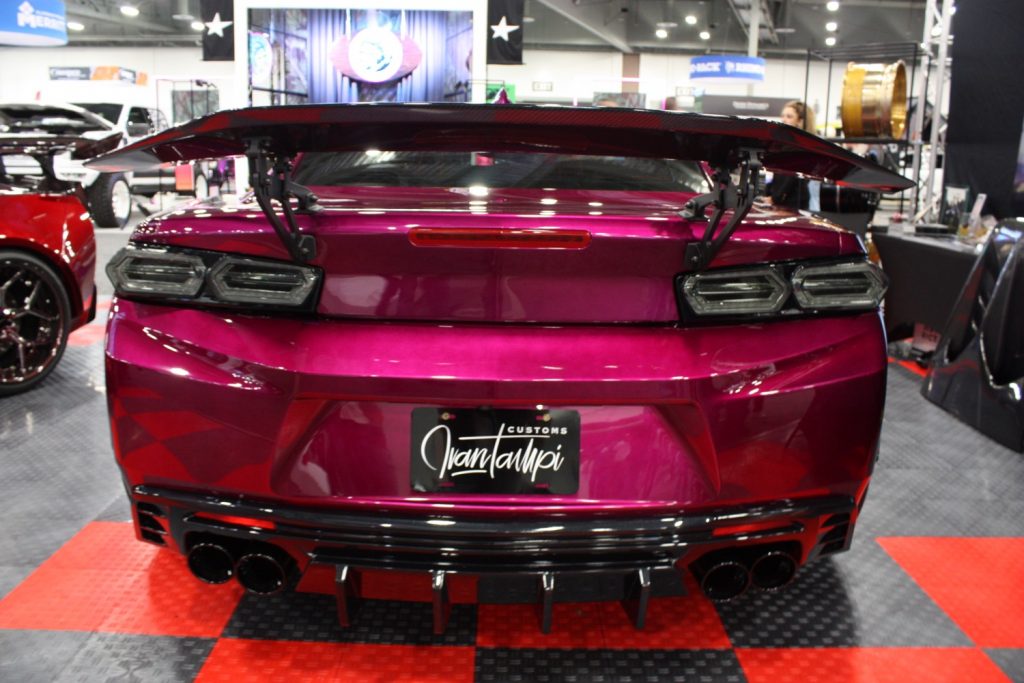 The new components start with the hood, which features a large central power bulge and vent, giving the Chevy Camaro an imposing look. Like the other body components added to this two-door, the hood incorporates a reflective quality that’s woven into the carbon, thus complementing the exterior paint. To note, the paint is dubbed Kandy Purple, from House of Kolor. 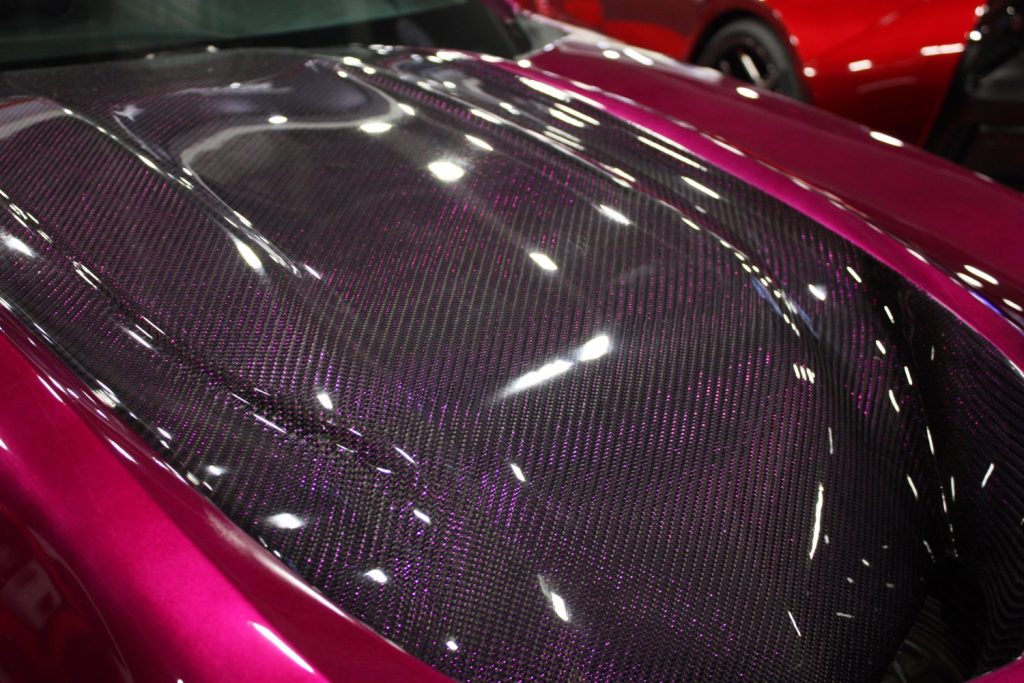 The new components also include large fender flares front and back, which incorporate the same reflective quality as the hood bulge, while adding significant width to the stance to match the aggressive hood upgrade. 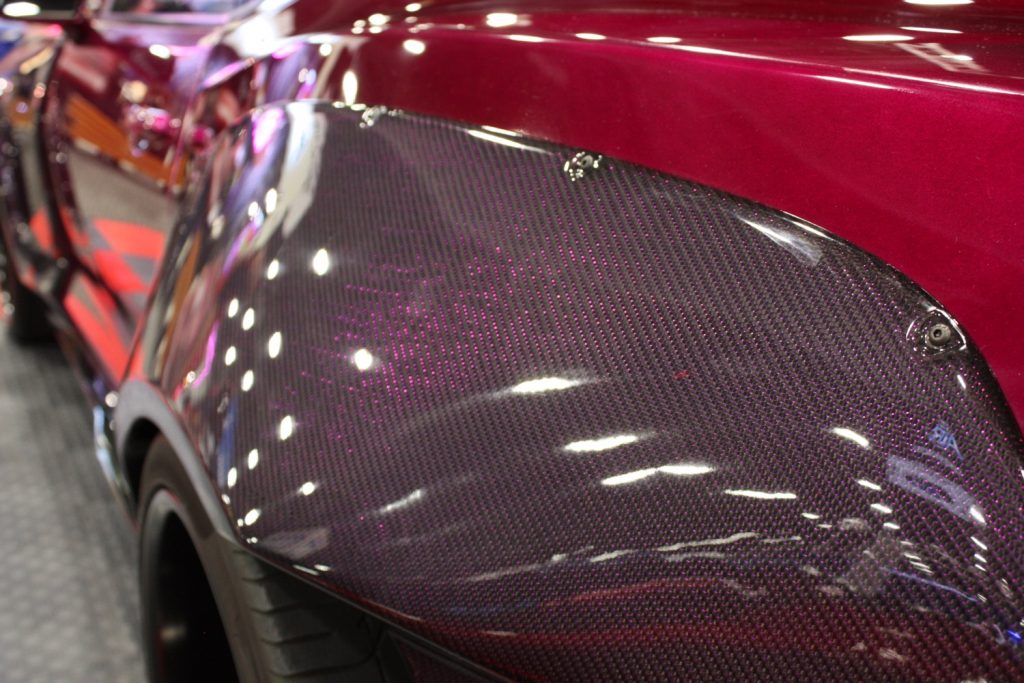 Under the fenders is a set of five-spoke Vicari Forged wheels, which have a similar purple-pink finish, plus a riveted-style lip and matching brake calipers underneath. 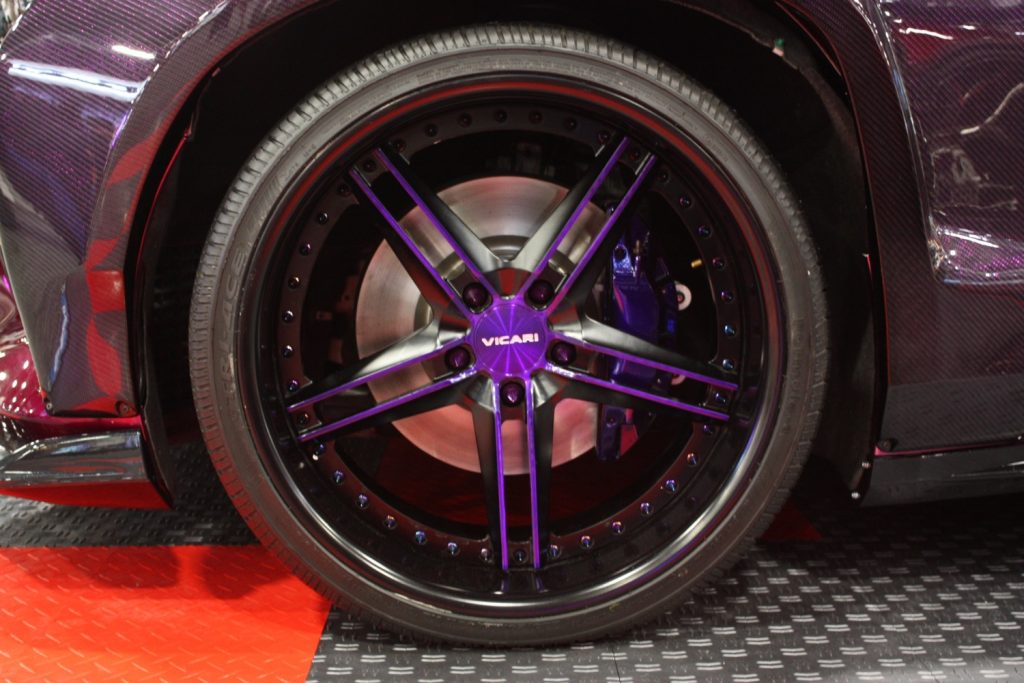 And we can’t forget the spiked, bullet-style lug nuts, finished in a darker purple finish than the wheels. 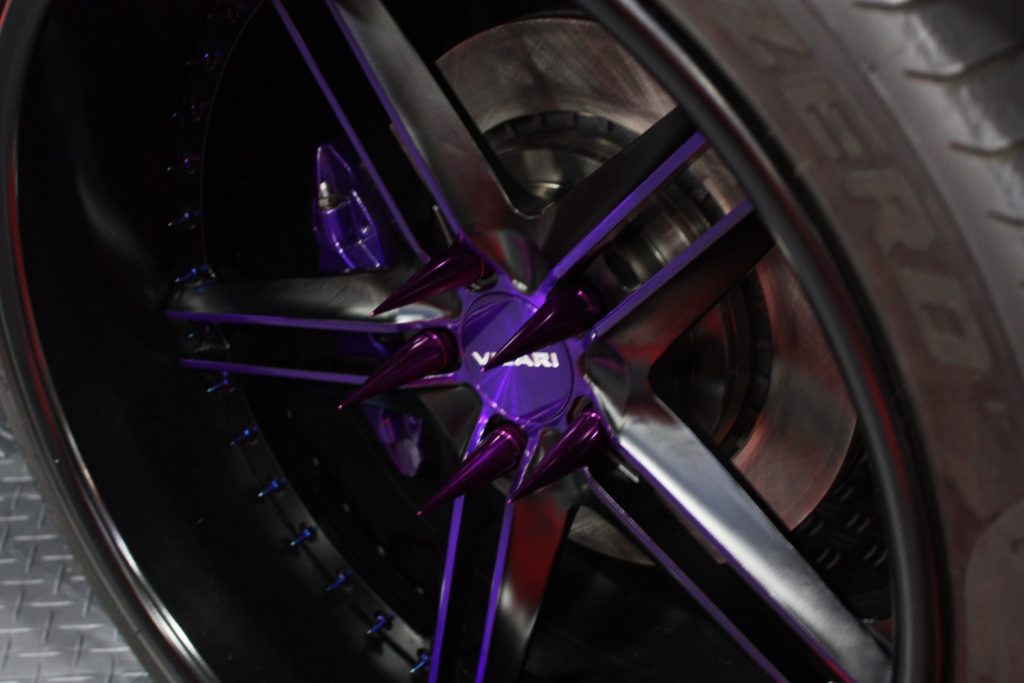 The rear end completes the look with a large GT-style wing, which attaches to the tail via two struts on the edge of decklid, complemented by black taillight housings and a black lower diffuser element. 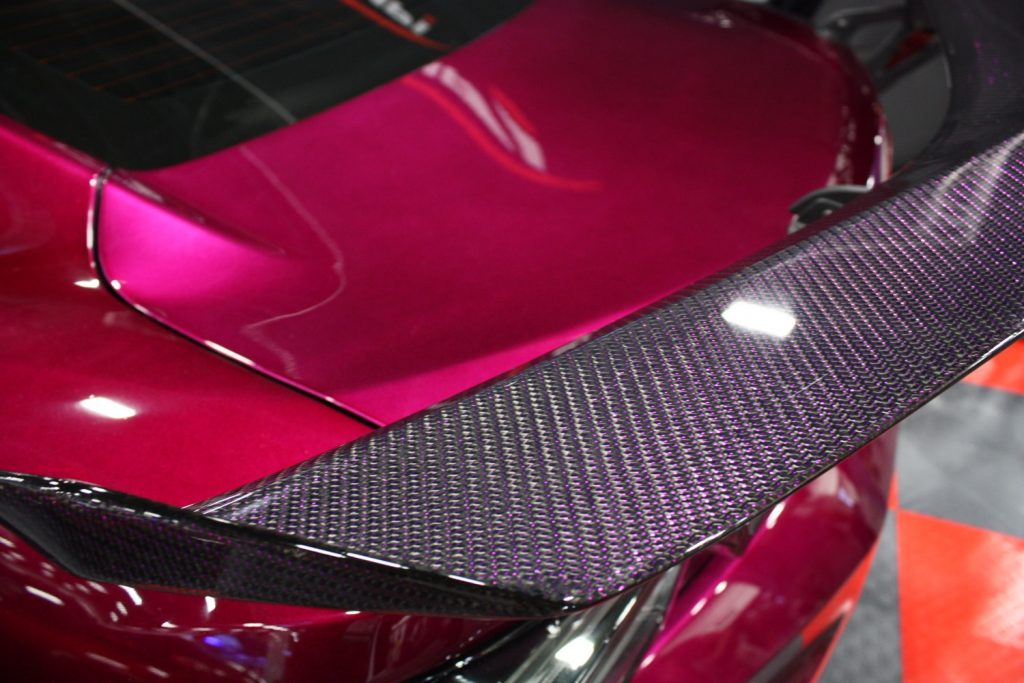 Under the hood, this wide body Chevy Camaro features an unmodified factory engine, with 455 horsepower and 455 pound-feet of torque from the naturally aspirated 6.2L V8 LT1 gasoline engine. As a reminder, the sixth-gen Chevy Camaro rides on GM Alpha platform, with production taking place at the GM Lansing Grand River plant in Michigan.