General Motors has released the first official teaser of the upcoming electric GMC Sierra Denali ahead of its upcoming debut in 2022.

The automaker released an image showing the front end of the electric GMC Sierra Denali, revealing an aerodynamically-enhanced grille opening flanked by the premium truck brand’s recognizable C-shaped LED headlamps. The teaser image also shows a uniquely styled hood and a faux front skid plate similar to the lower element seen on the refreshed 2022 GMC Sierra. Meanwhile, the 18-second teaser video reveals the truck’s exterior LED light animation, which may activate upon startup or when the vehicle is unlocked from a key fob. 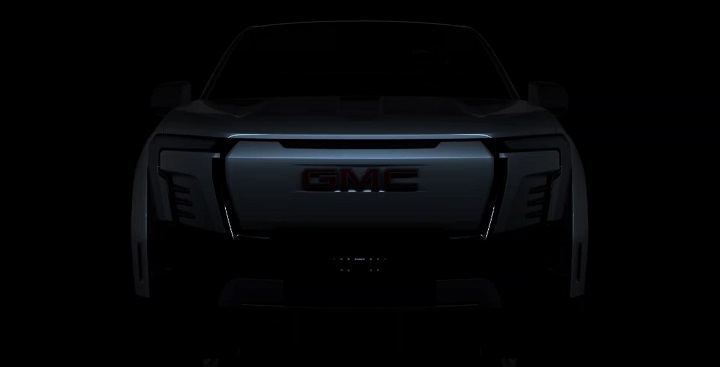 In a statement, GMC vice president Duncan Aldred said the electric GMC Sierra Denali will allow the automaker to expand even further on the luxurious nature of its popular Denali sub-brand.

“Sierra Denali holds tremendous equity for GMC and our customers,” said Aldred. “We now have an opportunity to evolve Sierra’s capabilities and technologies, as afforded by transitioning to an all-electric propulsion while also elevating the luxurious design and comfort associated with Denali.”

The electric GMC Sierra Denali will be built alongside the GMC Hummer EV pickup and SUV at the automaker’s Factory Zero plant in Detroit-Hamtramck, Michigan and will enter production in early 2023. We expect more details to be divulged once it makes its official debut next year.

As a reminder, GM is set to debut the Chevy Silverado E in a few short weeks at CES 2022. While well-equipped versions of the Chevy Silverado E will be offered, the truck will also serve the lower end of the market and will be available in a professional-grade trim level for fleets, setting it apart from the electric GMC Sierra Denali.

Check out the teaser video for the new electric GMC Sierra Denali embedded below.