The 2022 Cadillac CT5-V Blackwing is the most track-worthy production vehicle that Caddy has ever made, breaking cover earlier this year with a supercharged V8 and standard six-speed manual transmission. Now, CEO and Chairman of Barrett-Jackson Auctions, Craig Jackson, is taking delivery of his personal 2022 Cadillac CT5-V Blackwing Collector Series, as documented in the following 6-minute, 14-second walkaround video.

For those readers who may not know, Barrett-Jackson is one of the premier collector car auctions in the U.S., playing host to a number of high-profile events across the nation and overseeing the exchange of countless top-shelf automobiles. As such, Craig Jackson knows his stuff, and seems genuinely excited to receive his new 2022 Cadillac CT5-V Blackwing Collector Series.

Each example of the CT5-V Blackwing Collector Series stands apart from the rest of the lineup as one the first 250 CT5-V Blackwing units produced, and each comes with one of the first serial numbers, a few unique plaques, a certificate of authenticity, and a driving session at the Cadillac V-Performance Academy at the Spring Mountain Resort in Nevada, as well as a design sketch of the vehicle, as GM Authority covered previously. Cadillac also offers the same goodies for the Cadillac CT4-V Blackwing Collector Series. 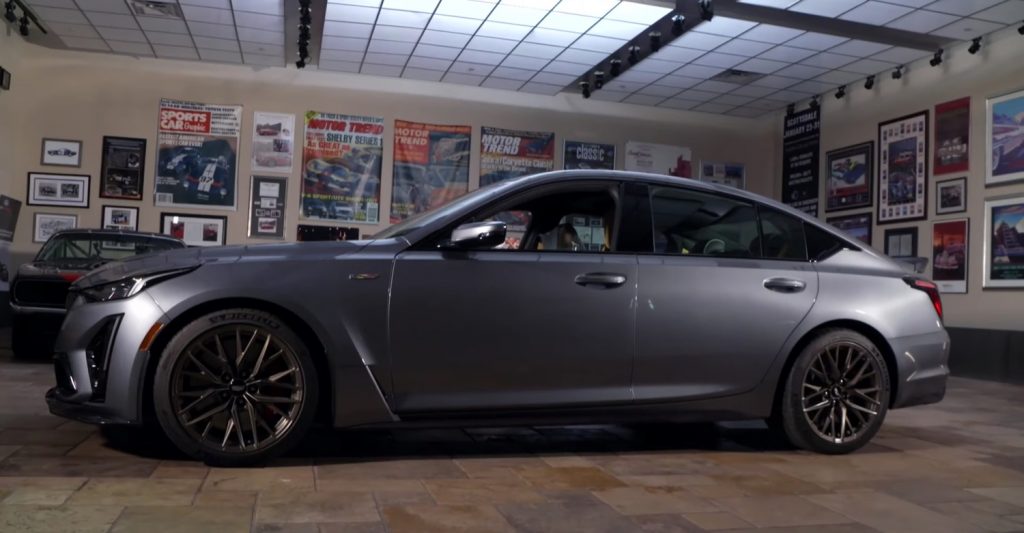 Under the hood, the 2022 Cadillac CT5-V Blackwing is equipped with the supercharged 6.2L V8 LT4 gasoline engine, rated at 668 horsepower and 659 pound-feet of torque. The ‘eight mates to a six-speed manual transmission as standard, while a 10-speed automatic is optional. Jackson smartly kept the six-speed. Indeed, as Cadillac transitions to an all-electric manufacturer, the pairing of a supercharged V8 and six-speed stick shift is undoubtedly the right combo for a collector.

Under the wider stance and curvaceous aerodynamics, the 2022 Cadillac CT5-V Blackwing rides on the GM Alpha 2 platform. Production takes place at the GM Lansing Grand River plant in Lansing, Michigan.

Check out more specs and details by hitting play on the video below: