One of the more attention-grabbing vehicles that General Motos brought to this year’s SEMA Show was the 1957 Chevy Project X Concept – a Chevy 210 that has eschewed its gasoline V8 engine for a more eco-friendly Electric Connect and Cruise setup. 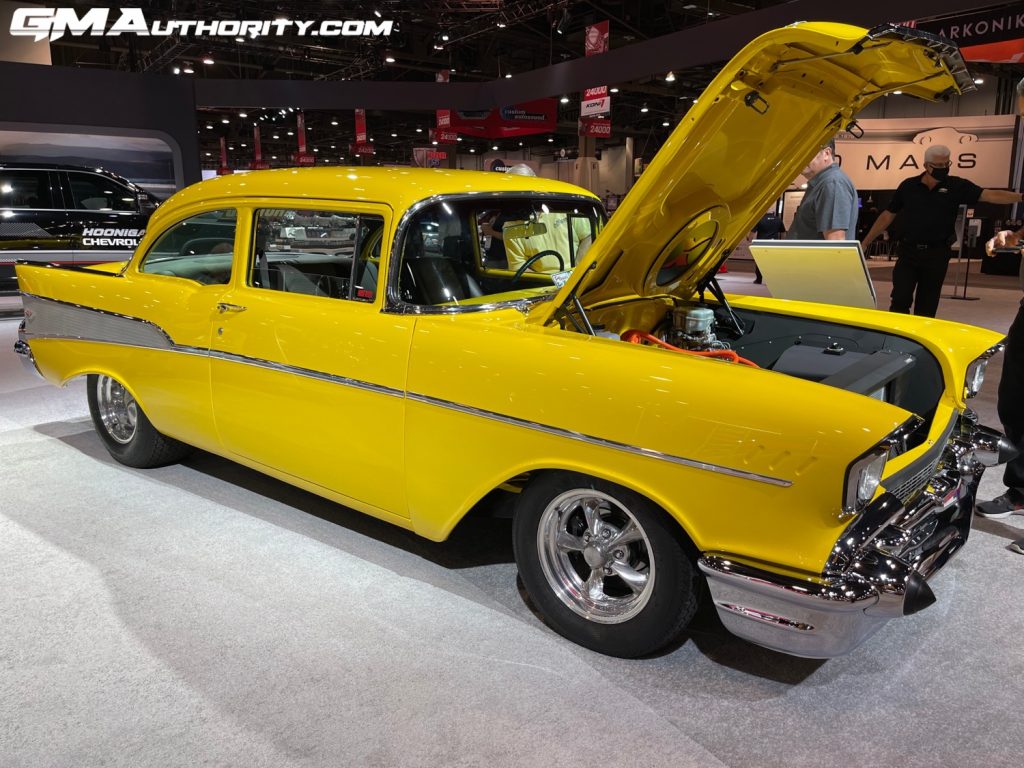 These live photos show the 1957 Chevy Project X on display at the 2021 SEMA Show, giving us an up-close look at this radical restomod. Out front, the Chevy Project X looks identical to a 1957 Chevy 210 and offers no indication that it’s motivated by a battery-electric powertrain. Even the large chrome grille remains intact and unmodified – despite the fact that an electric powertrain requires less cooling than an internal combustion engine. 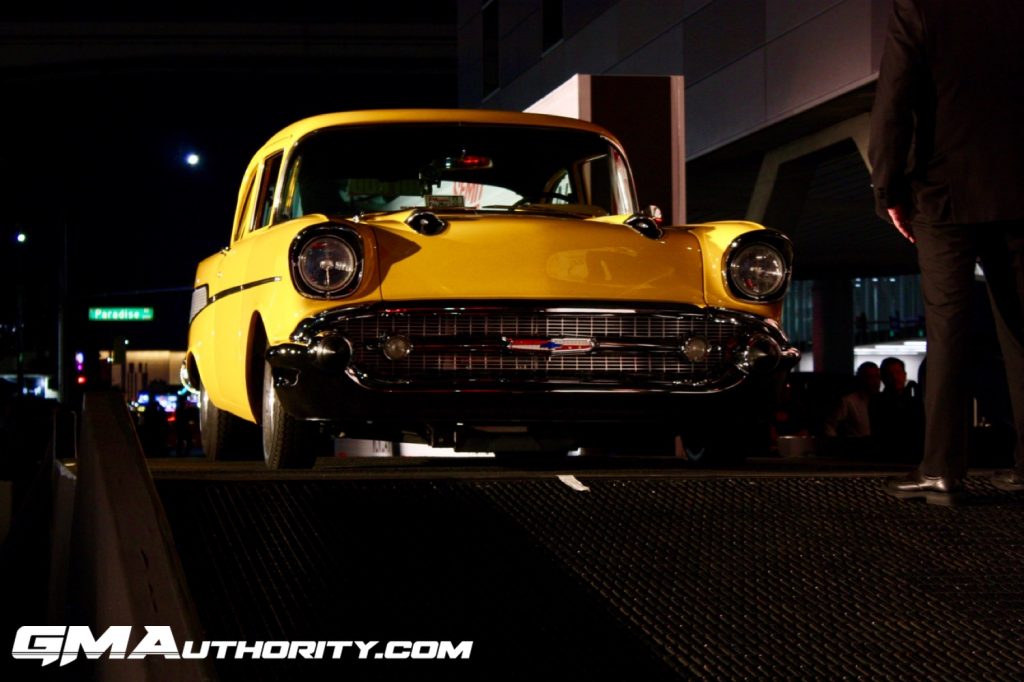 It’s a similar story with the side profile, which again does not hint toward the presence of a battery-electric powertrain in any way. The Chevy 210’s factory chrome side trim remains, with the only visible modification being a set of American Racing Torq-Thrust alloy wheels. 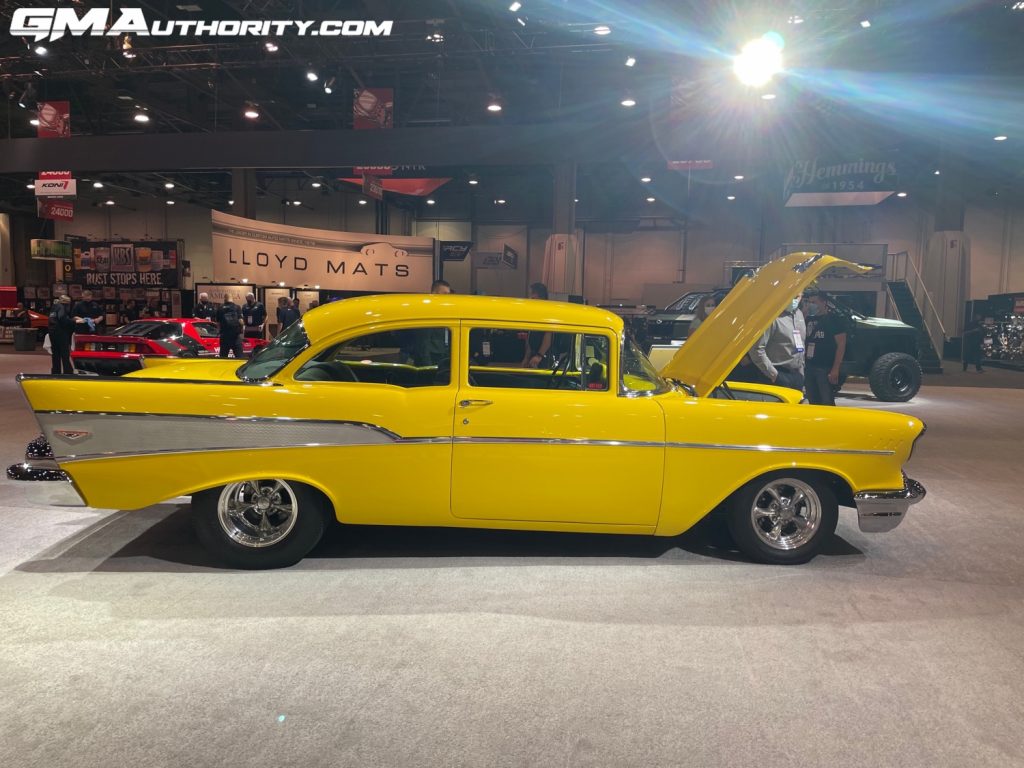 The rear fascia provides the first hint that we’re looking at an electric vehicle – however the presence of an electric motor and battery is still far from obvious. For starters, the Chevy Project X lacks any visible tailpipes, which is usually a good sign that a vehicle is an EV. The trim piece that sits above the conical taillamps also flips open to reveal the battery charging port, although the charge door’s seamless integration hides it from casual observers. 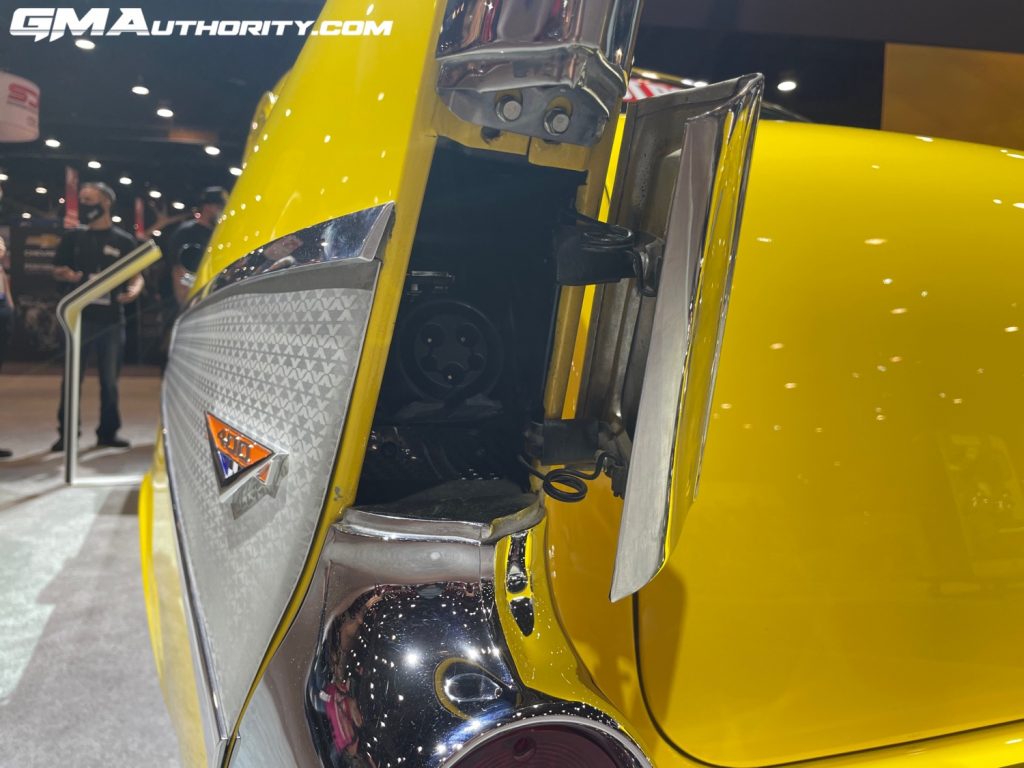 While the Chevy Project X offers little outward indication that it’s an EV, popping the hood will definitely blow the car’s cover, as this is where the vehicle’s electric drive unit sits. This drive unit is from the automaker’s new Ultium Drive electric motor family and will also power the upcoming 2023 Cadillac Lyriq. The motor is rated at 340 horsepower and 325 pound-feet of torque in both the Chevy Project X and the Cadillac Lyriq. The Project X’s 30 kWh lithium-ion battery, meanwhile, sits in the vehicle’s rather large trunk. The vehicle also uses the Electronic Precision Shift system and push-button shifter from the C8 Corvette Stingray.

The powertrain found in the Chevy Project X is described by GM as the next-generation of its Electric Connect and Cruise e-crate motor system that it debuted at last year’s SEMA Show. The first-generation Electric Connect and Cruise system is based on the Chevy Bolt EV’s powertrain and comprises a 60-kWh lithium-ion battery pack and 200 horsepower electric motor. This system, by comparison, is much more powerful but has a smaller battery pack for greater flexibility with regard to retrofitting and installation.

The next-generation Electric Connect and Cruise system remains a “proof of concept” product only for now, although we expect GM to release details on a production version at some point in the near future.