Gene Langmesser is the president and founder of an Anaheim-based custom car shop by the name of N2A Motors. Langmesser’s company specializes in applying old-school, retro styling to current day vehicles – so it should go without saying that his personal ride, which is based on a sixth-generation Chevy Camaro convertible, is something truly unique. Langmesser’s re-bodied Chevy Camaro was the subject of a recent video put together by the auto-obsessed folks behind the Barcroft Cars YouTube channel. His car features a replica 1957 Chevy Bel Air front end, along with a restyled side profile inspired by the 1958 Chevy Impala, and the rear fascia from a 1959 Impala. As such, Langemesser refers to his oddball creation as the ‘789’. According to Barcroft Cars, the 789’s fifteen-foot-long bodywork is mostly carbon fiber composite, although it was covered in a layer of fiberglass, which is apparently an easier surface to paint. He sculpted the bodywork by removing most of the stock Camaro body panels and laying about “1,500 pounds of clay,” over top of it, shaping the clay until it was up to his admittedly high standards. The vehicle is based on a sixth-generation Chevy Camaro SS and as such, is powered by a 6.2L LT1 V8 – which is factory rated at 455 horsepower in the Camaro. 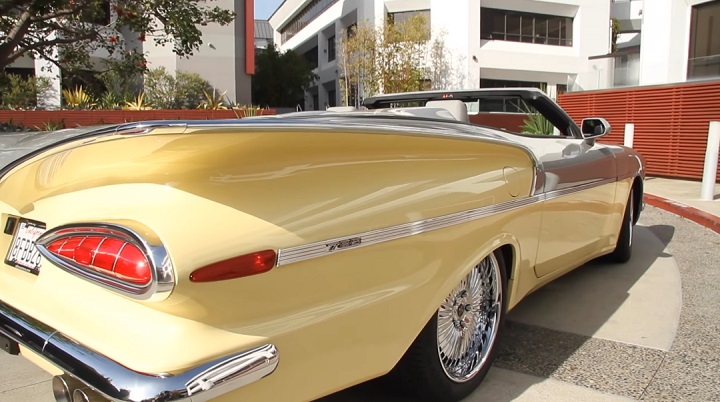 Langmesser says he loves driving the 789, although his favorite part of owning the unique re-bodied Camaro is talking about and sharing it with his fellow car enthusiasts.

“I just love the reaction people have when they see the car,” he told Barcroft Cars. “You go to a gas station and it takes you 20-25 minutes to get gas and you’re almost feeling rude trying to leave, because people are still gawking at the car, taking pictures and everything else.”

Learn more about the Chevy Camaro based ‘789’ in the video embedded below.