Some of the craziest builds we’ve ever seen have come out of an effort to win at Pikes Peak, from Paul Dallenbach’s 1,300 horsepower Chevy-powered open-wheeler to a turbocharged Chevy SS NASCAR Cup Series car. So when we saw that a 1967 Chevy Camaro built to race at Pikes Peak was featured on the latest episode of Hoonigan’s ‘This vs. That’ series, we knew we were in for a treat. 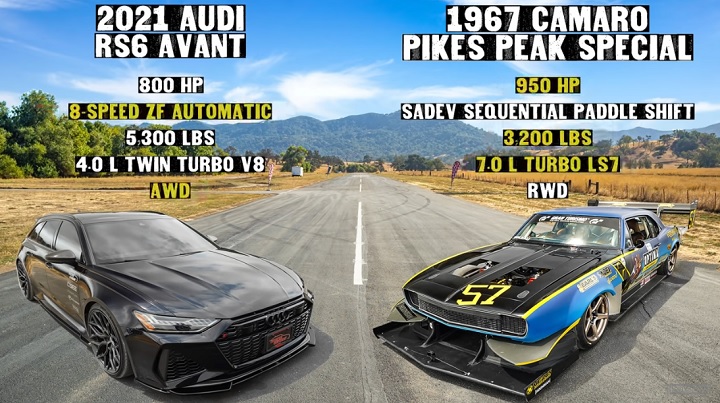 The Chevy Camaro in question was built by Mike Dusold and his company, Dusold Designs. Mike originally intended for the car to be an autocross racer only, but he eventually got the idea to take it to Pikes Peak, so he got to work making the necessary modifications to make the muscle car competitive in the world-renowned hill climb. Under the hood now sits a 7.0L LS7 with a Dart block, an aftermarket camshaft, a billet intake and, most importantly, a single Garrett G45 turbocharger. Dusold estimates the built LS now makes roughly 950 horsepower – all of which is sent to the rear wheels only through a Sadev sequential transmission with paddle shifters. 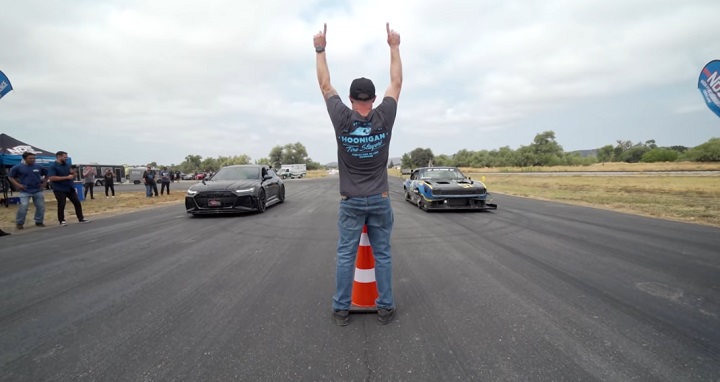 Pikes Peak has a lot of turns, of course, so there’s more to this build than just a powerful LS V8. It also features full aerodynamics (including a ridiculously large rear wing), along with racing brakes, lightweight wheels wrapped in ultra-sticky Michelin slicks and a stripped-out interior.

We could go on about this special custom Camaro, but we should probably talk about the car that Hoonigan lined up for Dusold to race. In the other corner of the ring is an 800 horsepower Audi RS6 Avant station wagon, which features various bolt-on mods and a retuned ECU. While the Audi is much heavier and down on power, it’s also all-wheel-drive and has the benefit of launch control, as well as an advanced eight-speed automatic transmission with close gear ratios.

Check out the video embedded below to see which of these very different offerings emerges victorious.