For the 1970 model year, General Motors lifted its ban on engines in excess of four hundred cubic inches in mid-size cars. This paved the way for the 455 cubic-inch V8 to be stuffed in the Oldsmobile 442, with output rated at 365 horsepower. Other changes of note included a silver grille with vertical bars, rectangular front bumper parking lights, and vertical tail lights. 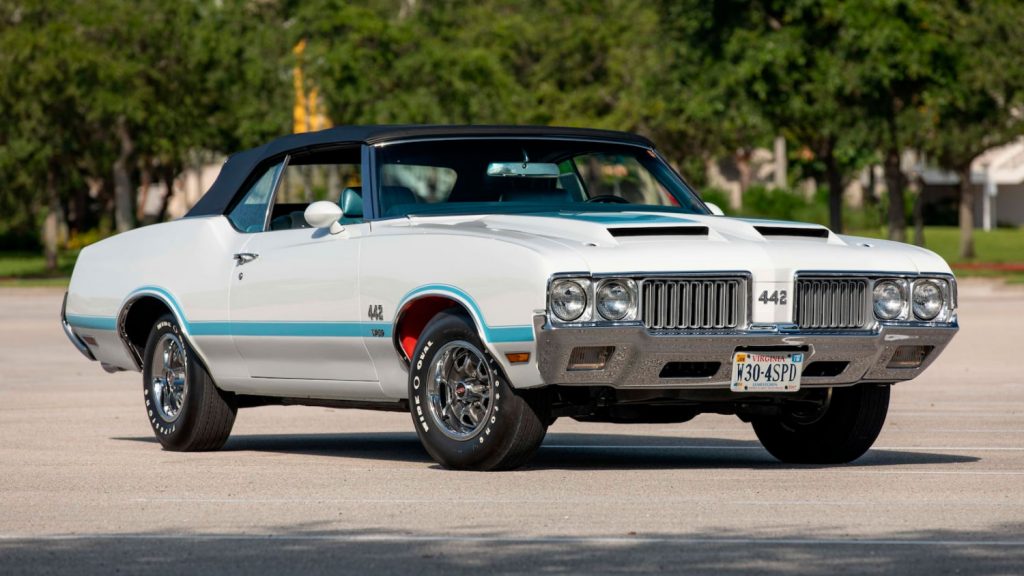 The Oldsmobile 442 could be equipped with the W-30 option package, which added the “Select-Fit” engine components, a W25 fiberglass hood with air induction through functional scoops, a low-restriction air cleaner, Winters aluminum intake, and a longer-duration, higher-lift cam. A heavy-duty, close-ratio four-speed manual transmission could also be had. The Rocket 455 was rated at 370 horsepower and a staggering 500 pound-feet of torque. Rear tires didn’t stand a chance. 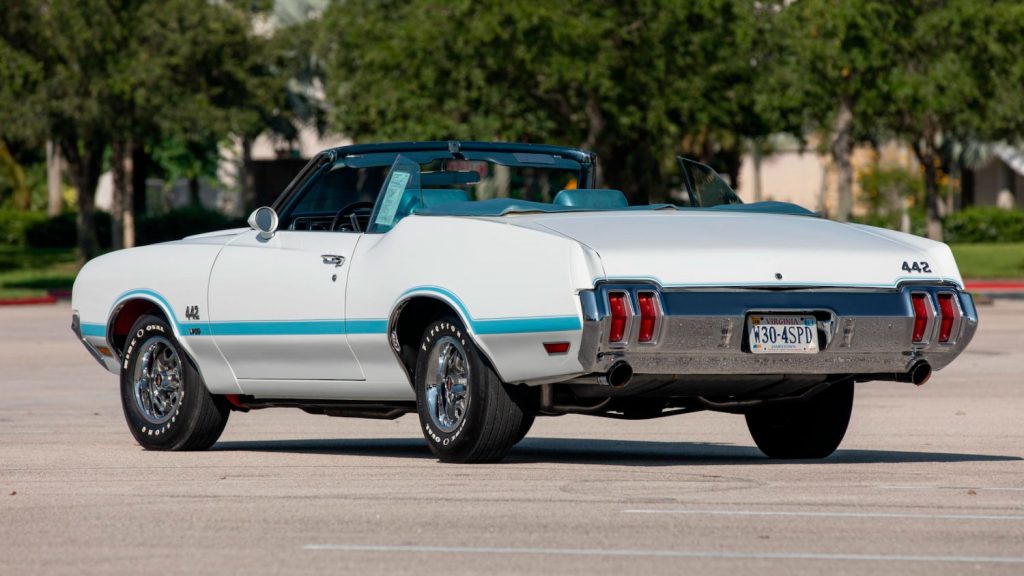 The beautifully restored Oldsmobile 442 W-30 convertible you see here was once a Stock class drag racer and NHRA record holder. Bought new by Paul Mayo, an Oldsmobile factory-backed drag racer, it was campaigned at East Coast dragstrips until he sold it to Penn State economics Ph.D. candidate Ron McHugh in 1973. 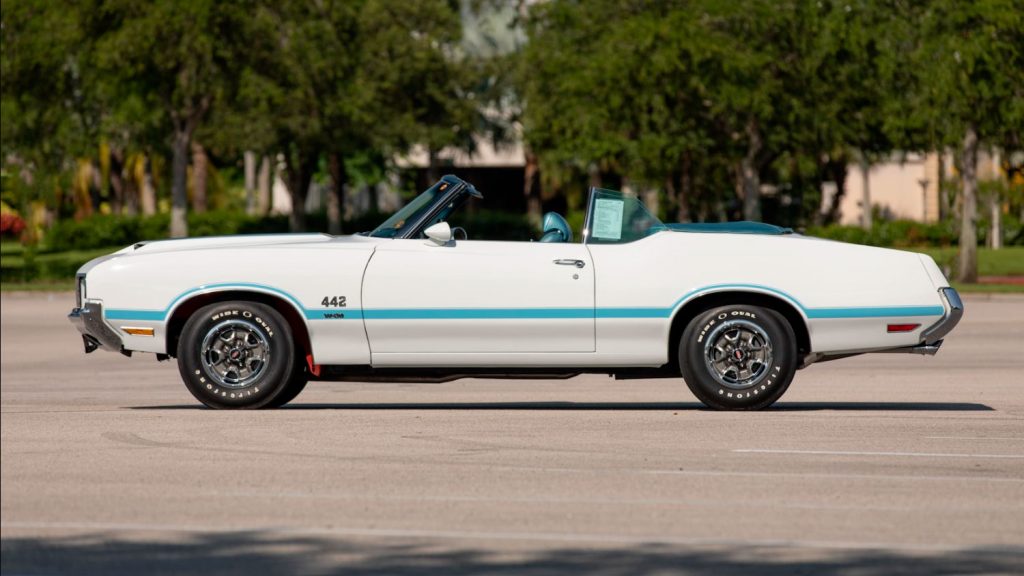 As happens with so many racers, the Oldsmobile 442 was eventually replaced by another car and was relegated to storage. It sat from the mid-1980s until 2007 when it was turned over to Oldsmobile expert Paul Frederick of Frederick Restorations in Warrenton, Virginia. The 442 convertible was given a concours-level rotisserie restoration. All of the racing equipment was removed and the car was returned to factory trim. 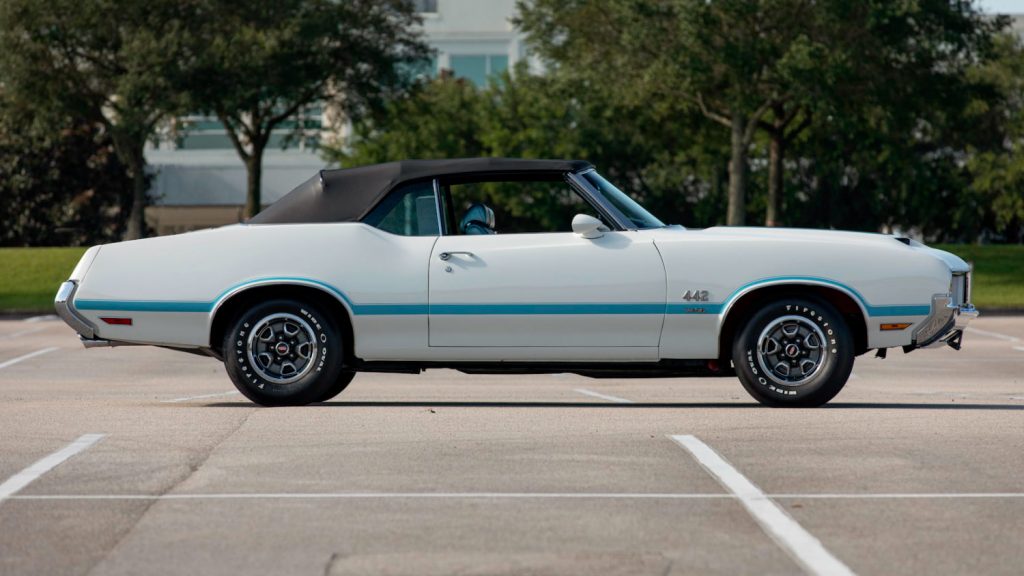 This 1970 Oldsmobile 442 is one of just 96 W-30 convertibles equipped with a four-speed manual. It is a show-winning restoration, having won the Oldsmobile Nationals in 2009 and 2010, and captured Certified Concours Gold at the 2013 Muscle Car and Corvette Nationals W-30 Reunion. It was the feature of an October 2017 Hemmings Muscle Machines article “The Doctor’s Olds.” 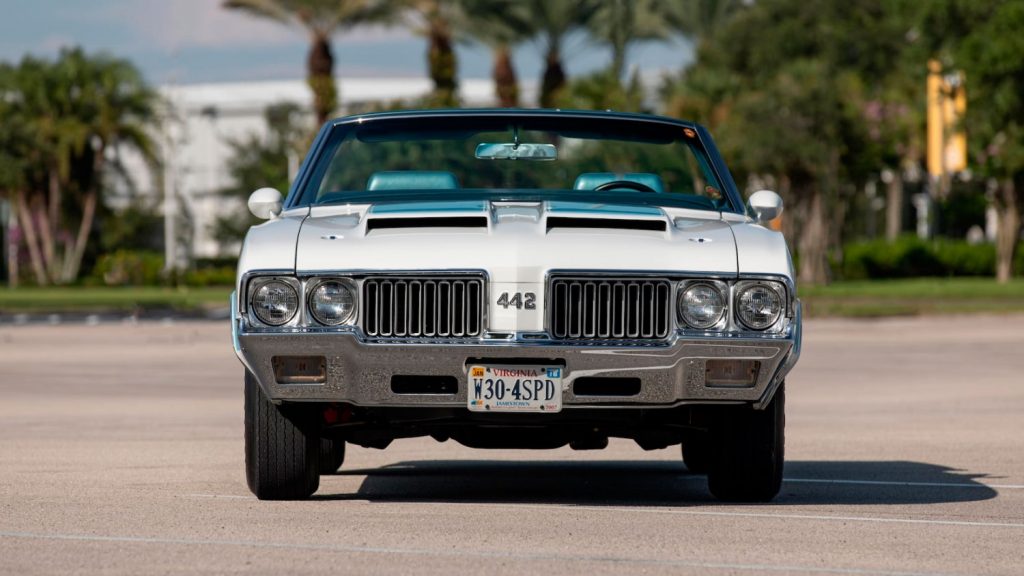 The Oldsmobile 442 has had a high-quality respray in Porcelain White with Azure Blue W-30 stripes. When the car was repainted, great care was taken to preserve the historic drag racing autographs and pinstriping on the underside of the trunk lid, including signatures from “Dr. Oldsmobile” Joe Mondello, famed announcer Jon “Thunder Lungs” Lundberg, and “Miss Hurst Golden Shifter” Linda Vaughn. 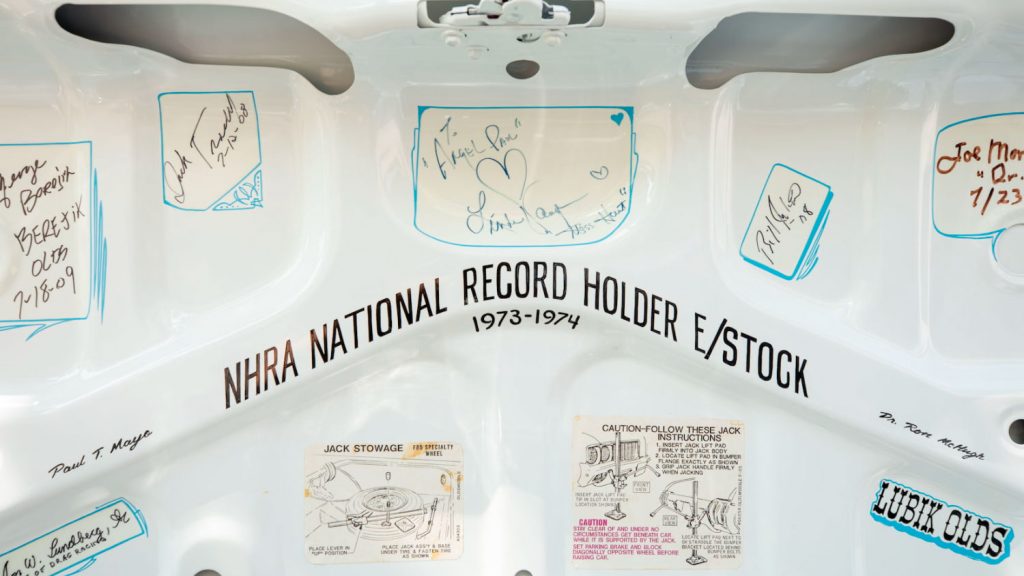 Inside the Oldsmobile 442, the interior has been restored in its original blue, with rebuilt seats and new carpet. The black power convertible top fits snugly, and is stowed beneath a blue convertible top boot when lowered. The 442 is equipped with a sport steering wheel, a center console, Rally Pack gauges, Y60 Lamp and Mirror group, power steering with front discs, AM/FM stereo. 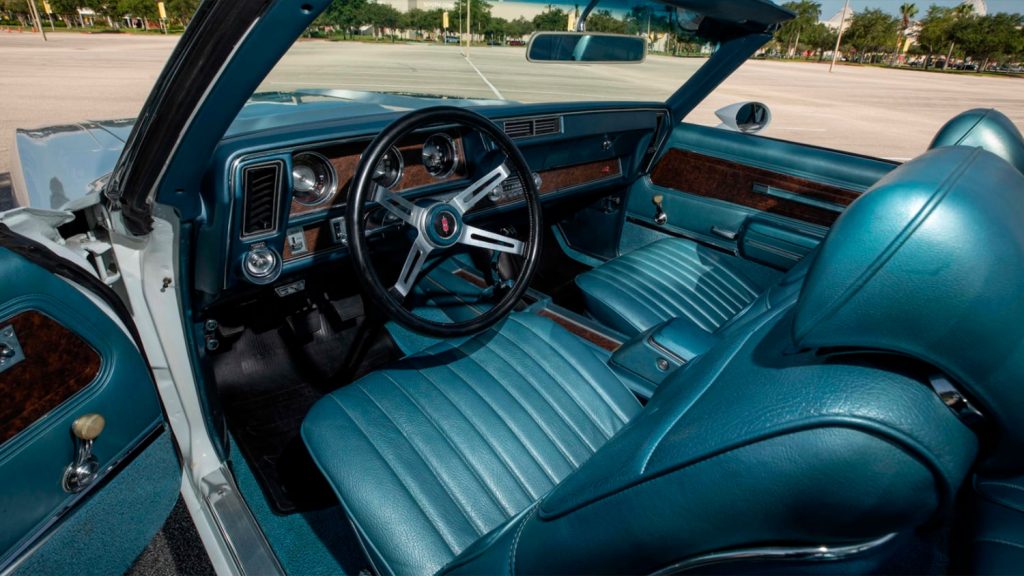 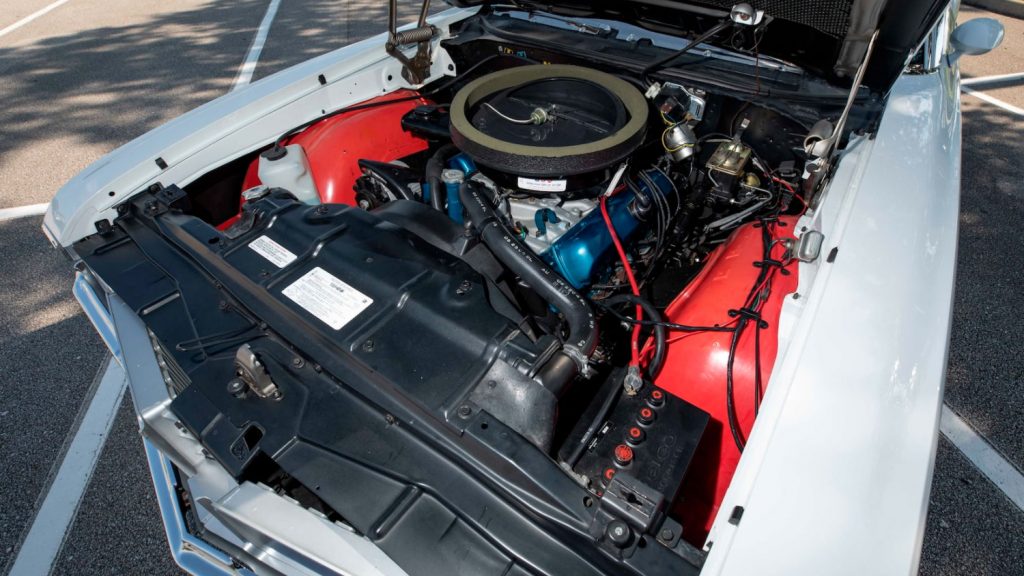 Included in the sale of the Oldsmobile 442 W-30 convertible is a huge trove of documentation, the window sticker, Protect-O-Plate and dealer warranty book, hundreds of photos and NRHA/IHRA trophies. 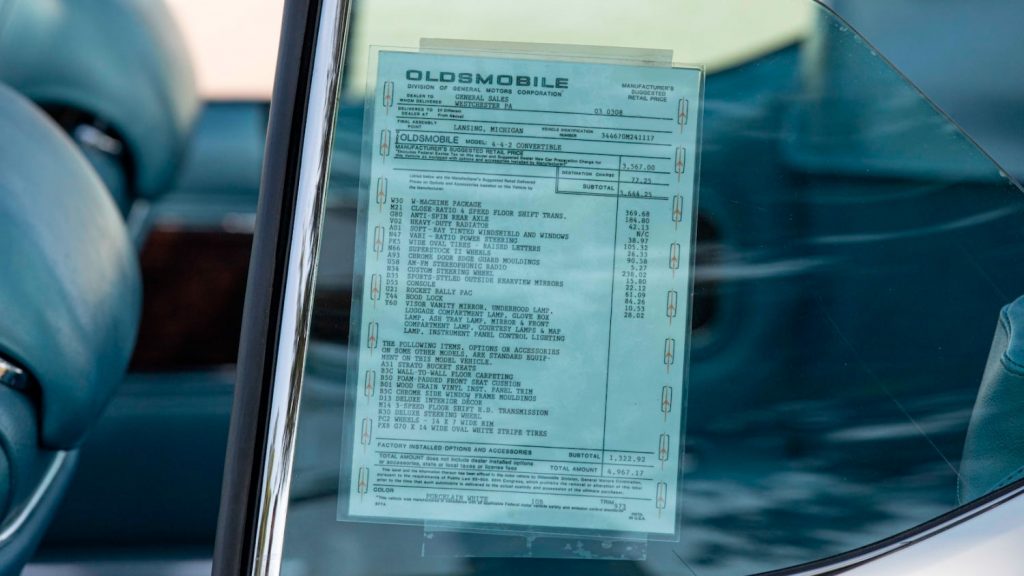 This historic Oldsmobile 442 will be crossing the auction block at the Mecum Auctions Kissimmee event in January, 2022. 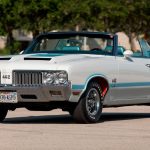 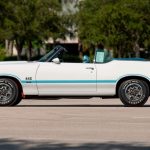 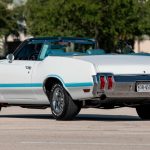 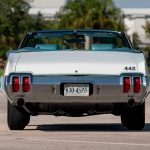 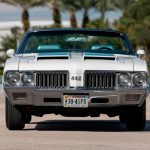 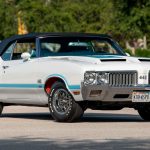 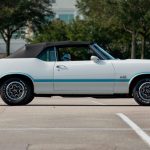 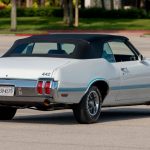 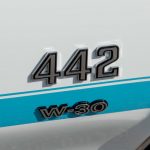 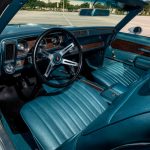 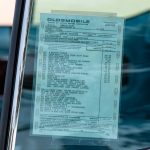 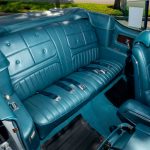 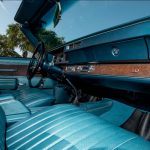 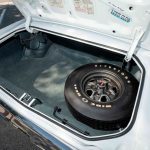 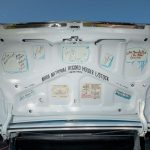 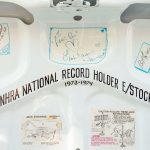 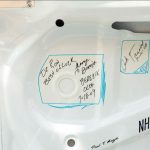 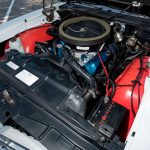 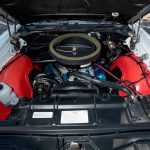 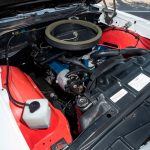