Back in January, NBC announced that had ordered a new sitcom for its 2021-2022 television season called “American Auto,” that would follow the lives of several high-ranking executives at a struggling Detroit car company. Now the network has released the first teaser trailer for American Auto, which appears to be heavily inspired by the tribulations that General Motors experienced in the years following its 2009 bankruptcy. 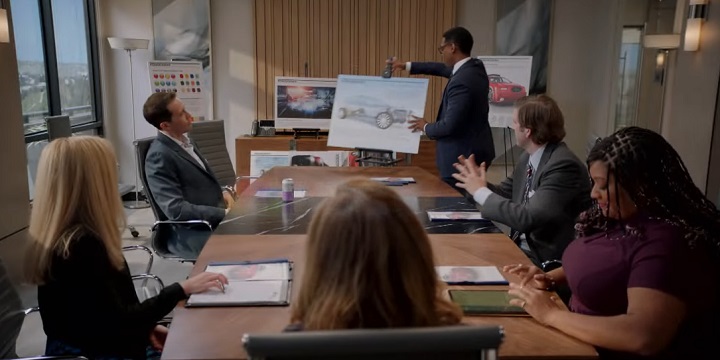 American Auto will provide a tongue-in-cheek look at the day-to-day dealings of a Detroit-based automotive executive. As we already know, Ana Gasteyer will star in the sitcom and will play the CEO of the fictional Payne Motors, Katherine Hastings. The teaser trailer released this week shows Gasteyer sitting around a boardroom table with her colleagues as they try to decide on an appropriate name for Payne Motors’ latest vehicle. They then poke fun at other automakers for implementing names that don’t translate well to other languages – a real scenario that we’ve seen with vehicles like the Chevy Nova and Mitsubishi Pajero.

Justin Spitzer, the writer and executive producer of the hugely popular NBC comedy “Superstore” is the lead writer for American Auto, while Aaron Kaplan, known for his “American Housewife” series on ABC, serves as executive producer. A special preview of American Auto will air on NBC on December 13th and will go live on the network’s Peacock streaming service on December 14th.

In its description for the show, NBC said American Auto is “set at the headquarters of a major American automotive company in Detroit where a floundering group of executives try to rediscover the company identity amidst a rapidly changing industry.” In addition to Gasteyer, the sitcom’s cast will also include Jon Barinholtz, Harriet Dyer, Humphrey Ker, Michael B. Washington and Tye White.

Check out the teaser trailer embedded below before the show airs in mid-December.