General Motors has pulled the veil off of an ultra-capable 2022 Chevy Colorado ZR2 Extreme Off-Road variant at the 2021 SEMA Show, which looks to elevate the capability of the Colorado ZR2 with a variety of different GM parts and accessories.

The Chevy Colorado ZR2 Extreme Off-Road is essentially a stock Colorado ZR2 equipped with a host of factory off-road racing parts from Chevrolet Accessories and Chevrolet Performance. The only photo of the vehicle issued by Chevrolet shows it equipped with several Chevrolet Accessories parts, including the Baja Designs Off-Road 30-Inch Light Bar (US $899), Baja Designs Squadron Sport Lamps ($269), an Off-Road Sport Bar ($1,195), Recovery Hooks in Red (US $125) and Crew Cab Rocker Panel Guards ($995). 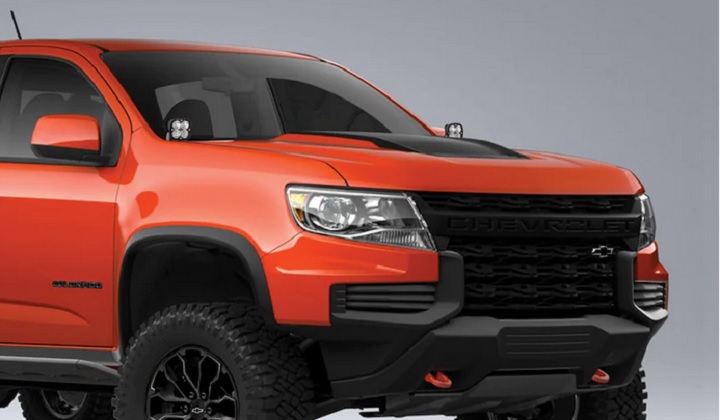 Under the hood of the 2022 Chevy Colorado Extreme Off-Road is a stock 3.6L V6 LGZ gasoline engine, which is factory rated at 308 horsepower and 275 pound-feet of torque. The V6 is paired with a GM eight-speed automatic transmission and a stock ZR2 four-wheel-drive system with front and rear electronic locking differentials. The ZR2’s important Multimatic DSSV dampers also remain, along with other ZR2-specific features like a transfer case shield, 17-inch off-road wheels, 17-inch Goodyear Wrangler Duratrac tires and a unique hood and front fascia/grille.

Chevy says the Chevy Colorado ZR2 Extreme Off-Road is the “outcome from decades of off-road racing expertise,” and said it was “developed by engineers and racers as passionate about performance as you are.” It will be on display at Chevy’s booth (No. 238427 in the Central Hall of the Las Vegas Convention Center) at the 2021 SEMA Show in Las Vegas from November 2nd through to November 5th. The truck will be displayed alongside other new SEMA products from the Chevy brand there, including the 650 horsepower Chevy Beast.