Most restomod-style builds we feature on this website are based on traditional muscle cars like the Chevy Camaro, Chevelle or Nova – but some car enthusiasts have a bit more imagination than others. Just take Matt Graves, for example, who dropped a GM LS-based 427 V8 and Tremec six-speed manual transmission in the most unlikely of General Motors vehicles: a 1983 Cadillac Coupe DeVille.

Aftermarket parts company Holley caught up with Graves and his unique Cadillac restomod at the recent Holley LS Fest East event, which was held at the NCM Motorsports Park in Bowling Green, Kentucky last month. Graves, who works for American Powertrain, went on camera for Holley’s YouTube channel to detail his build and how it came about. According to him, the idea started out as a bit of a joke and became a reality when the COVID-19 lockdowns hit last year, giving him no excuse to avoid undertaking a new DIY project at home. He also already had a 427 cubic inch Warhawk crate motor and Tremec six-speed manual sitting around, so all he had to do to complete the build was order some swap parts from Holley and get to work.

This Caddy puts out around 600 horsepower and weighs nearly 4,000 lbs, so powerful aftermarket brakes were also a necessity. Graves turned to Baer Brakes for some additional stopping power, installing 14-inch rotors with six piston calipers at all four corners. A set of American Racing alloy wheels shod in sticky Kumho rubber complete the build. 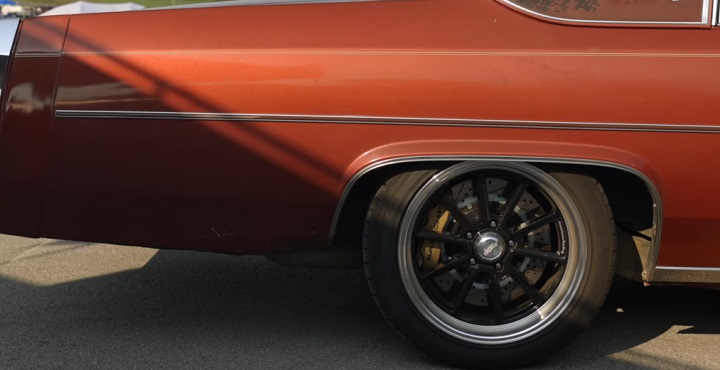 Learn more about Graves’ unique Cadillac Coupe DeVille (or the ‘Chicken Coupe, as he calls it) in the video embedded below.