A new smartphone app called DRIV3N Builds allows users to display and share their real-world car with a community of like-minded enthusiasts. 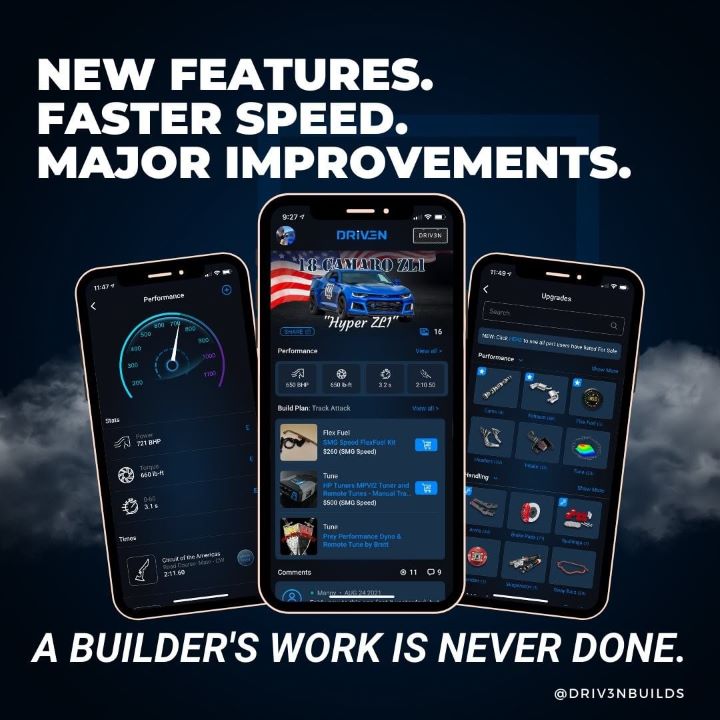 DRIV3N Builds is a free-to-download app for available for iPhone iOS and Android that operates similar to a traditional social media platform like Facebook or Twitter – except it places an emphasis on cars rather than people. The main dashboard on the app allows the user to provide a complete overview of their real-world ride and list the upgrades they’ve already applied to it. Users can also plan future upgrades for their build, helping them to keep track of the parts and components they’d like to install in the future. The app makes this easy by providing a long list of available aftermarket parts, giving users detailed manufacturer information including photos, descriptions, fitment, part numbers, MSRP, Reviews and more.

This is a social media app, so it also allows users to easily view others’ rides and the upgrades they have planned. They can also use others’ rides as inspiration and easily add their upgrade parts to their own wish list, making it simple to replicate builds from around the web.

“DRIV3N Builds is the first app built for automotive enthusiasts who love to upgrade their cars! Whether it’s for the thrill of the ride or the competition for speed and lap times, DRIV3N Builds is a platform for enthusiasts to Plan, Upgrade and Showcase their sweet rides,” the Apple store description for the app says. “Whether you’re stock or fully built, if it’s on wheels, it belongs on DRIV3N Builds!”

Users can also choose a showcase photo that will appear at the top of their main page, along with a background theme for the photo and nickname to go along with their car. For example, a white Chevy Camaro SS featured on the DRIV3N Builds website is nicknamed ‘White Lie’ and is shown with a handful of different backgrounds, including a flame-themed background.

The app is available to download now via the Apple App Store and Google Play store. Interested car fans can also learn more about the app via its official website, which can be accessed at this link.