A motorist with a dashcam captured the moment a Jeep Wrangler JL T-boned a Chevy Traverse that was trying to make a left turn.

The dashcam video of the incident, which happened in Hardeeville, South Carolina earlier this month, was uploaded to the ViralHog YouTube channel this week. The clip begins as the cammer approaches an intersection with a white first-generation Chevy Traverse driving in front of them. The Traverse then approaches an intersection with a green light and turns on their left turn indicator as they prepare to turn onto a side street. The Traverse then waits for a red Ford Edge to pass before attempting to initiate the turn when they are suddenly T-boned by a bright orange colored Jeep Wrangler JL.

Neither the driver of the Chevy Traverse nor the Jeep Wrangler JL was paying full attention in this instance, it seems. The Chevy driver could have easily waited for the Jeep to pass before turning as they were already in the intersection when the light was green, but the Jeep driver seemingly had plenty of time to slow down to avoid striking the Traverse with the speed that they did. It also looks as though the Jeep makes no attempt to brake or steer to avoid hitting the Chevy. 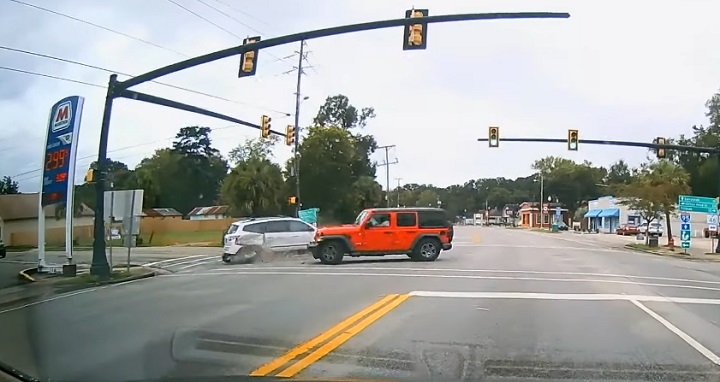 This is an unfortunate crash that wiped out two relatively new vehicles, but all that matters was that no one was seriously injured. The Jeep driver was seen exiting the vehicle under their own power at the end of the clip, but there’s no word on if the Traverse driver escaped major injury.

Side-impact car accidents kill between 8,000 and 10,000 people each year, which is more than rear-end and head-on collisions combined, according to data obtained by Florida-based law firm Goldman Babboni Fernandez & Walsh. For that reason, it’s always smart to remain patient and take extra care when turning left at an intersection.