The GM Defense ISV – or Infantry Squad Vehicle – is military-grade truck based on the Chevy Colorado ZR2 pickup truck. As such, the ISV uses 90 percent commercial-off-the-shelf components, including Multimatic Dynamic Suspension Spool Valve dampers, and is powered by the 2.8L LWN I4 turbo diesel baby Duramax engine. And on this episode of Jay Leno’s Garage, Jay gets to put the army-approved machine through its paces.

Jay is also joined by Steve duMont, who was appointed president of GM Defense back in May. Steve gives Mr. Leno the lowdown on the ISV, offering interesting tidbits and clarification, including the fact that it can run off of JP-8 (Jet Propellant 8) fuel, which means the ISV can use the same vehicle as the apache helicopters that deploy them into combat zones.

For those who may not be familiar with the product, designed to provide rapid ground mobility, the ISV is a light and agile all-terrain troop carrier intended to transport a nine-Soldier infantry squad moving throughout the battlefield. But the ISV must also be light enough, weighing 5,000 pounds or less, to be sling loaded from a UH-60 Blackhawk helicopter and compact enough to fit inside a CH-47 Chinook helicopter for air transportability.

GM competed with other defense companies to win the ISV contract, with the U.S. Army selecting the ISV over other similar design proposals from Oshkosh and Polaris. The Army has set an acquisition objective of 2,065 vehicles for its Infantry Brigade Combat Teams, with the first batch of 649 units provided at a cost of $214.3 million. 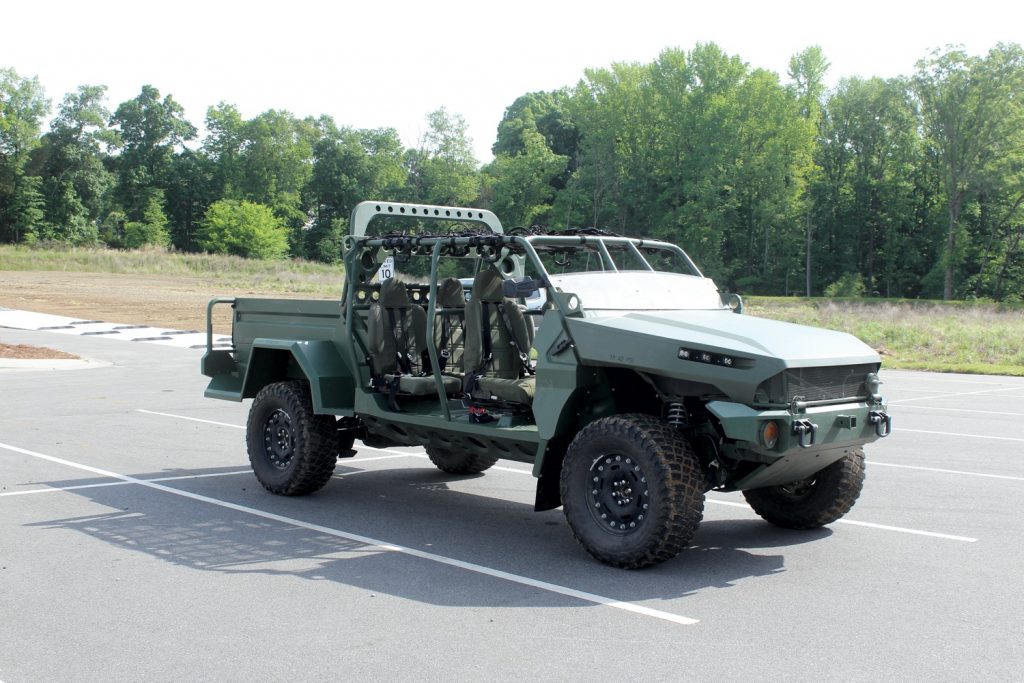 While the first units were built at a GM facility in Michigan, regular production takes place at the GM Defense plant in North Carolina. In addition to producing the diesel-powered GM Defense ISV, the subsidiary also recently developed a new all-electric ISV concept – dubbed the All Electric Concept Vehicle – which we previously overviewed in side-by-side comparison with the ICE variant. As of this writing, the GM Defense ISV Electric Concept is still just a concept, and the subsidiary has not confirmed whether or not it will enter production.

As we mentioned, the first 649 units of the ISV came at a cost of $214.3 million. And while some quick math would suggest that each unit costs $330,200 – based on the $214.3 million contract that procured the initial 649 units – GM Defense has gone on the record to say that this isn’t a strictly accurate figure. As such, actual GM Defense Infantry Squad Vehicle pricing remains a mystery.

To see what sort of capability those tax dollars afford our military personnel, hit play on the embedded video below and watch Jay put the GM Defense ISV through its paces.