The Chevy II may be a small and relatively unassuming car, especially when compared to other General Motors muscle cars from the 1960s, but this two-door family sedan was surprisingly fast in certain specifications.

The Detroit muscle-obsessed YouTube channel Cars and Zebras recently caught up with a 1966 Chevy II in a rare specification during an event for the Factory Appearing Stock Tire (FAST) series at Mid Michigan Motorplex. This Chevy II left the factory with the 327 cubic inch L79 V8, a four-speed manual transmission and a 4.11 rear end. This mini-monster powerplant puts out around 350 horsepower and 360 pound-feet of torque, giving the compact two-door enough power to scoot down the quarter-mile in the mid-13 second range at a little over 100 mph. 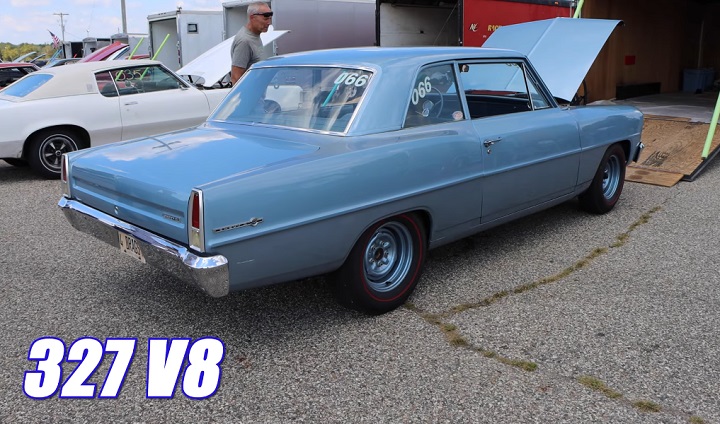 This rather rare Chevy II found a worthy foe at Mid Michigan Motorplex in the way of a 1967 Pontiac GTO. According to Cars and Zebras, the GTO in question has a High Output version of the Pontiac 400 V8 putting out about 360 horsepower, which is paired with a four-speed manual transmission and slightly taller 3.90 gears.

While the Pontiac is slightly more powerful, the Chevy II is quite a bit lighter. The Pontiac weighs 3,720 pounds with the driver behind the wheel, while the Chevy II is just 3,062 pounds. As the name suggests, the Factory Appearing Stock Tire (FAST) series does not allow any modifications and requires cars to be on a factory-representative set of tires, as well, so these cars are essentially the same as they were when they rolled off the dealership nearly 50 years ago.

With all that in mind, which of these two vintage GM performance machines do you think will win? Place your bets and click play on the video embedded below to see which is victorious.