The driver of a Chevy Silverado HD was arrested after they led police on a high-speed chase through Los Angeles Monday night, which ended when the suspect crashed heavily trying to take a highway off-ramp.

It’s not entirely clear how this pursuit began, although Fox 11 reports the suspect is involved in an ongoing investigation in L.A.’s Lynwood neighbourhood. The driver was pursued by both the Los Angeles County Sheriff’s Department and the South Pasadena Police Department, which chased the person onto the freeway as news helicopters gave chase in the sky.

The driver eventually lost control of the Chevy Silverado HD as they attempted to exit the 60 Freeway and enter the 710 southbound. Footage shows the driver approaching a sharp right-hand turn at speeds of over 60 mph before understeering into a curb, crashing into a lamp post and hitting a fence.

The driver initially tried to run from the scene of the crash, but eventually surrendered as police descended on the scene with their weapons drawn. It’s not clear why the driver of the vehicle believed they could successfully evade police in a busy metropolitan area such as Los Angeles. Police had not named the suspect as of this writing, although they confirmed the person was taken into custody at 10:52 p.m. local time. 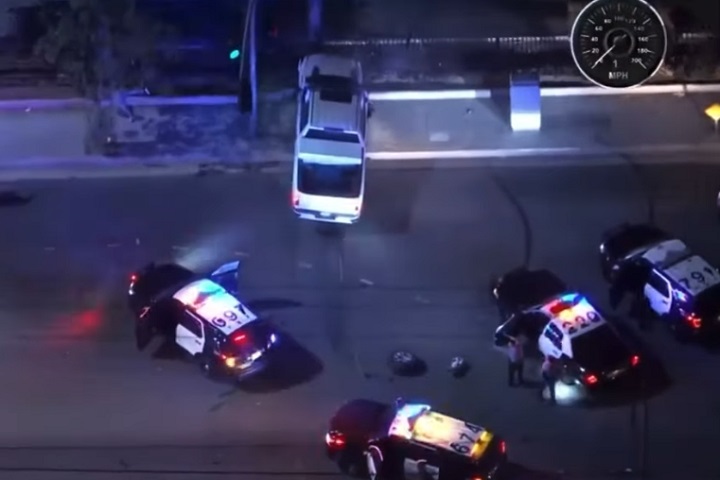 See the high-speed pursuit and subsequent crash in the video embedded below.