A Chevy Silverado driver was caught on camera wrecking their camper after they became enraged whilst trying to enter an underground parking garage in Las Vegas earlier this month.

The rather comedic incident was caught on video by an interested onlooker and was posted to the ViralHog YouTube channel this week. The clip shows a first-generation Chevy Silverado with a large camper in tow attempting to enter the underground parking garage for the ARIA hotel in downtown Las Vegas when the truck driver realizes their trailer is too tall to clear the roof of the garage. The driver then makes multiple attempts to reverse the trailer out of the downhill driveway, eventually becoming tied up on a curb as they try to initiate a three-point turn.

After some more messing about, the driver suddenly becomes enraged at the situation before him and accelerates toward the garage entrance, smashing the roof-mounted A/C unit off the edge of the garage ceiling and likely causing structural damage to the trailer itself. The truck ended up getting stuck in the entrance to the garage, forcing emergency crews to section off the area as they worked to free the Chevy Silverado.

The person that filmed this ordeal describes the situation like this:

“This driver realizes he was too big to enter the underground parking entrance at the Aria hotel in Las Vegas, but couldn’t back his trailer out. He erratically made several attempts to exit, but continued to get more and more frustrated. He didn’t allow anyone to attempt to help him. Finally, he hit his breaking point and gunned it. He took off the A/C unit of the trailer and caused who knows how much damage on the other side. Six hours later the area was still blocked off as he was still stuck in there.” 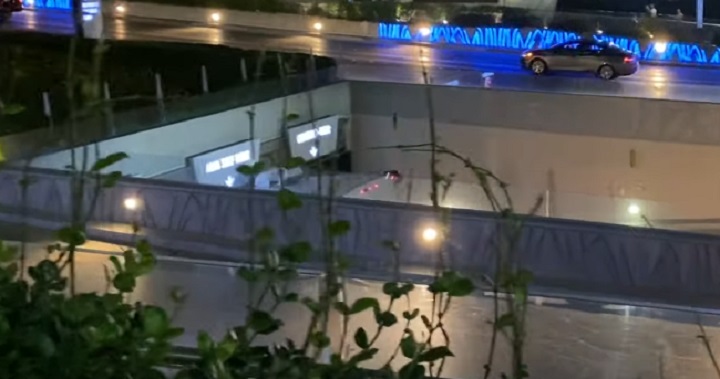 We initially felt a little bad for the driver of the Chevy Silverado, as we assumed they may have been inexperienced with towing trailers and/or entering underground garages. Our sympathy went out the window once we learned the person refused help from passersby, though. Sometimes it’s best to just swallow your pride and accept the help.