The C8 Corvette Stingray has the goods to perform in a wide variety of speed tests, from the road course, to the drag strip. Now, we’re checking out the how the C8 Corvette gets on against the Mercedes-AMG GT 4-Door Coupe.

Let’s kick things off with what both these machines are bringing to the fight, starting with a refresher on the C8 Corvette Stingray. This particular example is the Convertible model, and looks as though it’s equipped with the Z51 Performance Package. Assuming the owner left the engine unmodified, output is rated at 495 horsepower and 470 pound-feet of torque, which represents a 5-horsepower and 5-pound-foot increase compared to models without the Z51 package thanks to the addition of a factory performance exhaust system. Muscle is routed rearwards through an eight-speed dual-clutch automatic transmission. 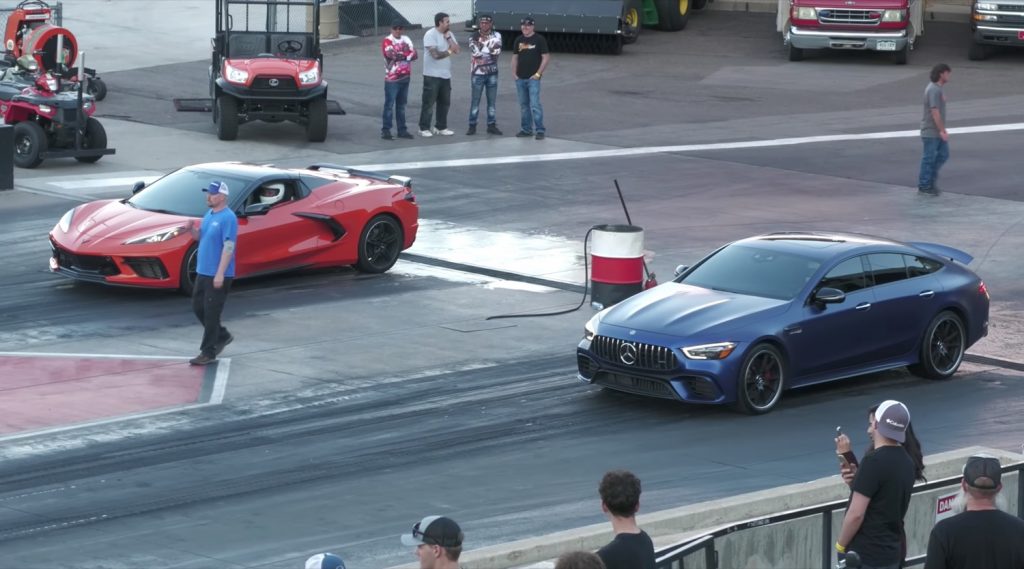 In the other lane is the Mercedes-AMG GT 4-Door Coupe, specifically the range-topping AMG GT 63 S. That means this thing is equipped with a twin-turbo 4.0L V8 throwing down a heady 630 horsepower and 664 pound-feet of torque.

So then, the Merc has the Vette beat when it comes to power – but it’s actually much worse than that. The Mercedes also has the traction advantage thanks to a 4MATIC all-wheel drive system. To add insult to injury, the race is taking place at Bandimere Speedway in Jefferson County, Colorado, placing it 5,800 feet of above sea level. That tips the odds in favor of the Merc even more, as the turbocharged Mercedes won’t have the same power loss as the naturally aspirated C8 Corvette.

Once the lights go green, the two drag racers take off, with the driver in the C8 Corvette rocketing off the line ahead of the Mercedes by a wide margin. Unfortunately, while the Mercedes-AMG GT 4-Door Coupe may have been caught sleeping, the raw output from that turbocharged powerplant is simply too much for the C8 Corvette to overcome, especially at altitude.

Watch the race for yourself right here: