A couple of years ago GM Authority took a stab at rendering a Chevy Camaro four-door sedan. We’re doing so again today, but this time around, like the automotive industry seems to be poised to do, we’ve gone electric. 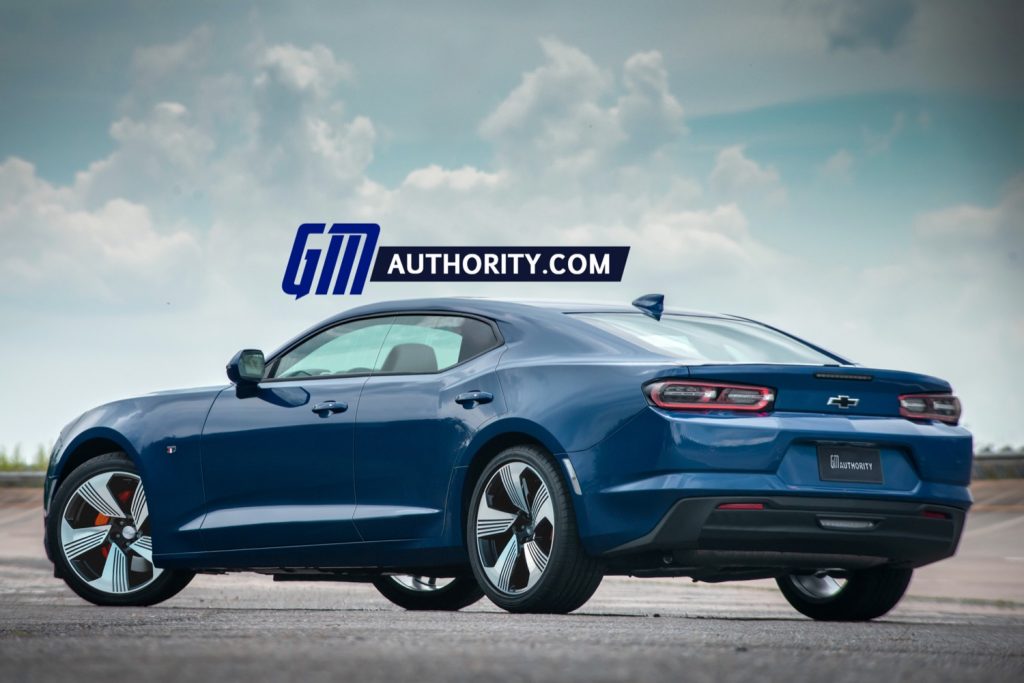 Our rendering of an electric Camaro sedan is heavily based on the current, sixth-generation model but with several key changes. First, we added two more doors while shortening the length of the front ones, so as to accommodate the sedan layout. We then added an EV-friendly front fascia that keeps some of the styling from the sixth-gen Camaro, while borrowing some cues from the 2022 Chevy Bolt EV and Chevy Bolt EUV, such as the blocked-off grille/grille insert.

Eagle-eyed readers will notice that the SS-style heat extractor on the hood is present, even though it likely won’t be necessary or functional. Out back, we replaced the familiar dual exhaust in favor of a clean lower fascia. And we’re banking on the flexible packaging of GM’s Ultium battery pack and BEV3 platform to make the rear seat adult-friendly. The entire ensemble of this electric Camaro sedan rides on a set of multi-five-spoke 19-inch wheels optimized for the enhanced aerodynamic properties of an EV. 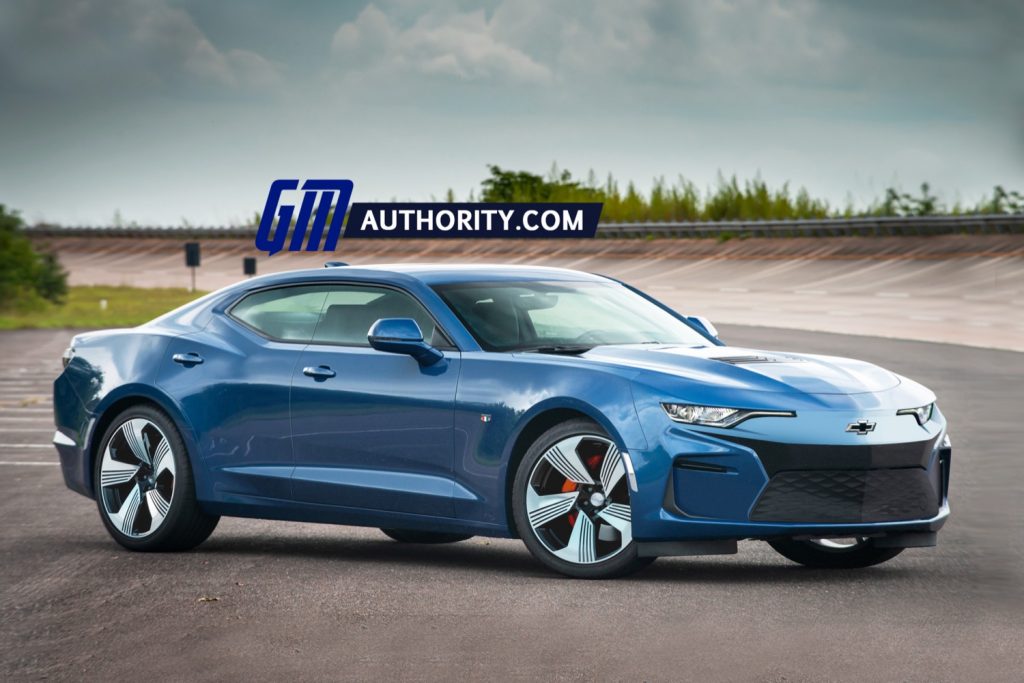 As GM Authority exclusively reported in June, the timeframe for discontinuation of the current, sixth-generation Chevy Camaro is rather fluid, with uncertainty as to when the current generation will be sunset. GM’s original plan involved discontinuing the current, internal combustion-engined muscle car in 2023, after the 2024 model year. However, GM Authority sources have also said that a plan is being considered that extends the sixth-gen Camaro program through the 2026 model year.

After that, the Camaro will likely evolve into an all-new, all-electric vehicle. How many doors that product will have is currently unclear, but given that Chevy will find itself without a single sedan in its lineup over the next few years, we would say that a Camaro sedan is exactly what the doctor ordered.

No matter the door count, it’s worth noting that a future Camaro EV will be supported by GM’s $35 billion investment to develop new electric and autonomous vehicles through 2025. The result of that plan will have the automaker plans to launch at least 20 new EV models in North America in the next five years before migrating its entire light-vehicle portfolio to EV by 2035.

It’s also worth noting that General Motors President, Mark Reuss, recently provided another hint at a future electric Chevy Camaro. During a presentation of GM’s electric vehicle plans in 2020, the automaker teased an image (above) that showed what appears to be a Camaro body atop of GM’s latest BEV3 platform.

Although Reuss declined to “put a year on that” in terms of a timeframe for the release of an all-electric GM sports car, the executive did indicate that such a vehicle was well within reach for the automaker in terms of technology and development. Reuss addressed the topic by discussing the Cadillac Celestiq, the luxury marque’s upcoming all-electric flagship sedan.

“What we’ve done with those [battery] modules and cells is we’re able to flip those on their sides to get the [hip] point down and to get the roofline down in the car,” Reuss said. “And so that car is a very low-roof car, and that sort of sets up that variant of the Ultium platform.”

“Lots of things being looked at, studied, designed, engineered,” Reuss added. “But I can tell you that the platform is absolutely capable of doing just about everything we want in our portfolio across every segment.”