A rather embarrassing one-car accident involving a dark red Buick Lucerne was caught on video by a dash cammer in Winnipeg, Manitoba this week.

This clip was captured in the early morning hours of August 2nd, 2021 and was taken from a rearward-facing onboard camera affixed to the roof of a pickup truck. It shows a red Buick Lucerne driving at a moderate speed in the far left lane when they collide with the center median. The driver was looking in the rearview mirror at the time of the collision and noticed the vehicle hit the curb, alerting his passenger by saying “oh, that guy just hit the curb.” 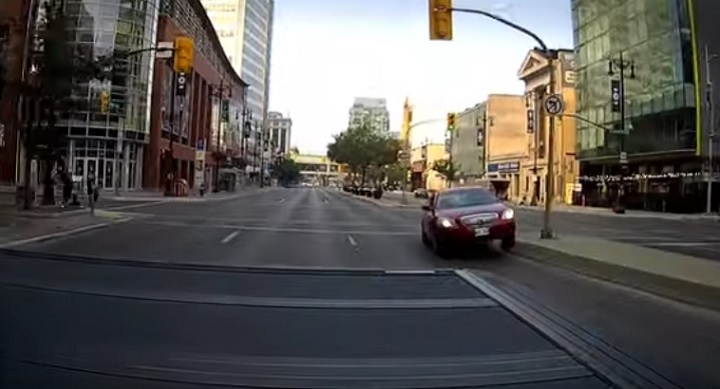 According to the video description, the cammer and his father were driving through downtown Winnipeg to pick up a table when the crash occurred.

“Just (an) early morning drive with my dad and I to pick up a table, too early for some it seems,” the cammer said in the description.

It seems as though the Buick Lucerne driver was not paying full attention to the road ahead and didn’t notice the lane they were travelling in gets slightly narrower past the intersection. It does look like they noticed they were going to hit the curb at the last moment, making a vain attempt to steer and avoid the curb, but they end up glancing the curb with their driver’s side wheel anyway. We’d be very surprised if the vehicle didn’t suffer some type of suspension and/or steering damage in the impact, but we hope for the driver’s sake that this G-platform Buick was tough enough to shake this minor accident off without needing any major repairs.

See the crash for yourself in the video embedded just below.