An oddball homemade supercar based on a C5 Corvette made its official debut during the Hot August Nights car show in Reno, Nevada last week, turning heads with its strange styling and twin mid-mounted V8 engines. 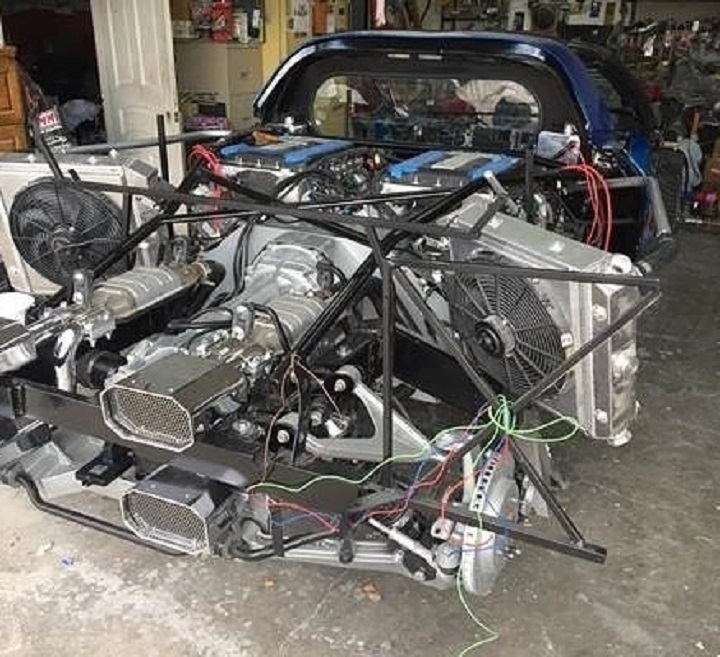 This car, creatively named the Super Super Car, was built by Las Vegas-based New Zealander Gordon Tronson and debuted in the Amsoil booth at Hot August Nights. It’s based on a C5 Corvette, but features a custom fabricated rear subframe and a custom front clip, leaving only the passenger cell section from the Vette. Behind the passenger cell sit a pair of supercharged 6.2-liter LT4 V8 crate engines, which together produce 1,300 horsepower and 1,280 pound-feet of torque. There’s no official on what it’s got for a transmission, but based on the photos, it appears to be a modern-day automatic of some sort.

Amsoil claims this car has a projected top speed of 290-300 mph, although we have our doubts it would be able to achieve such a speed in the real world. There’s a lot more to going fast than huge power and we’re not sure if this home-built supercar has much to offer outside of its outrageous twin-engine powerplant. There’s also the issue of wheels and tires. The Super Super Car appears to be wearing a set of off-the-shelf alloy tuner wheels, which are wrapped in a set of standard Pirelli P-Zero tires – neither of which seem up to the task of safely and reliably reaching 300 mph.

While its performance is yet-to-proven, there’s no denying that this is an impressive creation with a lot of thought, time and money put into it. Tronson was recently spotted around Carmel, California showing off his new Super Super Car during Monterey Car Week, so perhaps we’ll get some more information on this unique project in the near future.