A Chevy S-10 with a 1,700 horsepower twin-turbo V8 has set a new quarter-mile record for manual cars powered by a General Motors LS V8 engine. 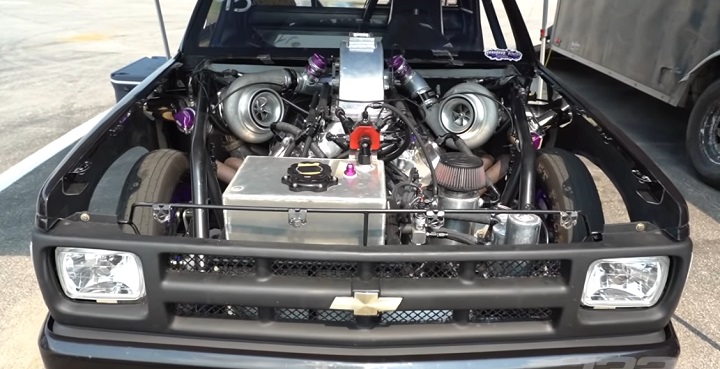 This truck is driven by the very man that put it together, Nick Cole-Mann, who caught up with YouTube’s 1320 Video at the racetrack shortly after he put the finishing touches on the project earlier this year. The record-breaking Chevy S-10 is powered by a 402 cubic inch Dart block LS with twin BorgWarner 76-87 turbochargers and a Dougherty Racing camshaft (among a litany of other aftermarket performance parts) which made 1,751 horsepower on a dyno earlier this year. Power is sent to the rear wheels through a six-speed manual dog box transmission with the fifth and sixth gears removed.

This setup, as one can imagine, is enough to propel the lightweight first-generation Chevy S-10 down the quarter-mile with considerable gusto. With 1320’s cameras rolling, Nick managed to run an impressive quarter-mile pass of 7.28 seconds at 196.93 mph – a fast enough time to make this the quickest stick-shift Chevy LS-powered car in existence. The stick shift Chevy LS world record was previously held by a similarly powerful fourth-generation Chevy Camaro. 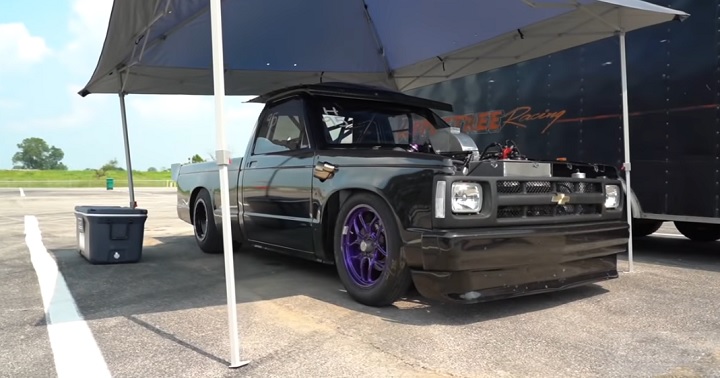 This record didn’t come easy to Nick. While he’s obviously quite talented at building race cars, he tried numerous different setups on his Chevy S-10 before settling on something final. He’s also been making continuous clutch adjustments to the G-Force manual transmission this year to help him get a better launch and execute quicker shifts. It’d be easy for him to ditch the somewhat finicky four-speed manual for an automatic, but there’s no denying that a quick stick shift car like this is a bit more satisfying to drive.

Check out the video embedded below to see Nick’s wicked fast Chevy S-10 in action.