The driver of a Chevy Camaro Convertible was filmed performing donuts on the New Jersey Turnpike last weekend after his collaborators blocked traffic. 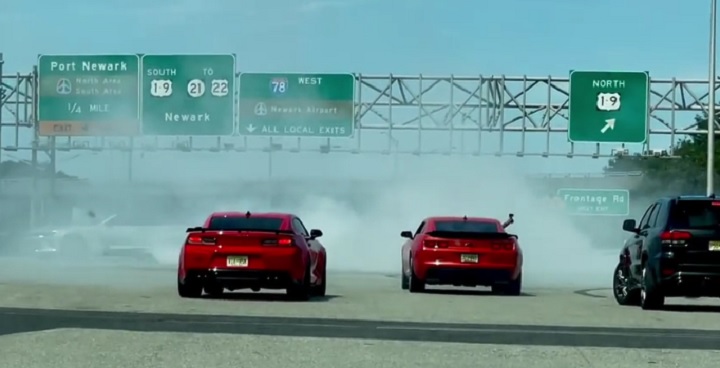 A Reddit user filmed the illegal drifting sideshow on Sunday and posted it to the /r/IdiotsInCars subreddit shortly after. The video shows three Chevy Camaros conspiring to make this ill-considered sideshow happen: a silver sixth-generation Chevy Camaro Convertible performing the donuts and two red coupe models blocking traffic and watching on. One of the red Camaros is a sixth-generation model, while the other is an older fifth-gen. The passenger in the red fifth-gen Camaro also appears to be filming his buddy with a GoPro camera, so a different angle of this sideshow likely exists out there somewhere.

Local news has yet to report on this incident and police have not issued a statement on the matter, so it seems as though the drivers of these Chevys, which all appear to have New Jersey plates, may have gotten away with their little stunt. Then again, their license plates are also on display in this clip, so perhaps the police will be paying them a visit in the near future. The video appears to have been filmed on the I-78 heading westbound near the Port Newark container terminal.

Unfortunately, it’s not that uncommon to see drifting sideshows like this on the highway in major metropolitan areas across the country. Back in 2019, illegal drifting sideshows became so common in the Oakland area that city leaders demanded the police to take more action to prevent and stop such activities. Sideshows like these sometimes attract hundreds of onlookers as well, and gained popularity in certain areas amid the COVID-19 pandemic, according to a report from the BBC.