The C8 Corvette Stingray and C7 Corvette Z06 are surprisingly close in performance. Chevy claims the C7 Corvette Z06 will complete the quarter-mile in 10.95 seconds at 127 mph, while the C8 Corvette Stingray clocks in at 11.2 seconds at 122 mph. With a difference of only three-tenths between them, the biggest deciding factor in a race between these two American sports cars would be the driver.

A YouTube user recently filmed a race between a C8 Corvette Stingray and C7 Corvette Z06 at their local drag strip and the race was about as close as one would expect. Before we get into the race results, though, let’s remind ourselves what each of these high-performance Chevys has under the hood. 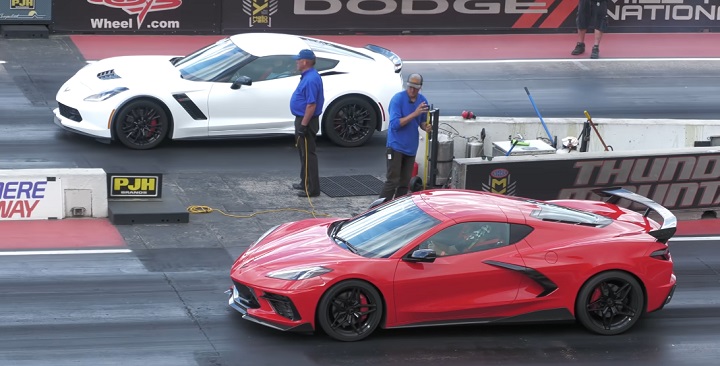 While the C8 Corvette Stingray is down on power in this comparison, it manages to churn out similar quarter-mile pass times to the C7 Corvette Z06 thanks to its more advanced launch control/traction control systems and dual-clutch transmission. That said, the driver doesn’t seem to capitalize on these systems properly in the race and gets a slow launch, allowing the C7 Corvette Z06 to get the jump and use its more powerful supercharged V8 to build a sizable gap over the Stingray.

Check out this close Chevy vs. Chevy race in the video embedded below.