In GM Authority‘s latest side by side design comparison, we’re looking at two vehicles which share the same nameplate but represent (very) different generations – a 2021 Chevy Corvette C8 Stingray and one of its immediate predecessors, a 2019 Corvette Grand Sport. For the sake of simplicity, the C8 pictured here is the car with the Accelerate Yellow Metallic paint, while the C7 is the one painted white. 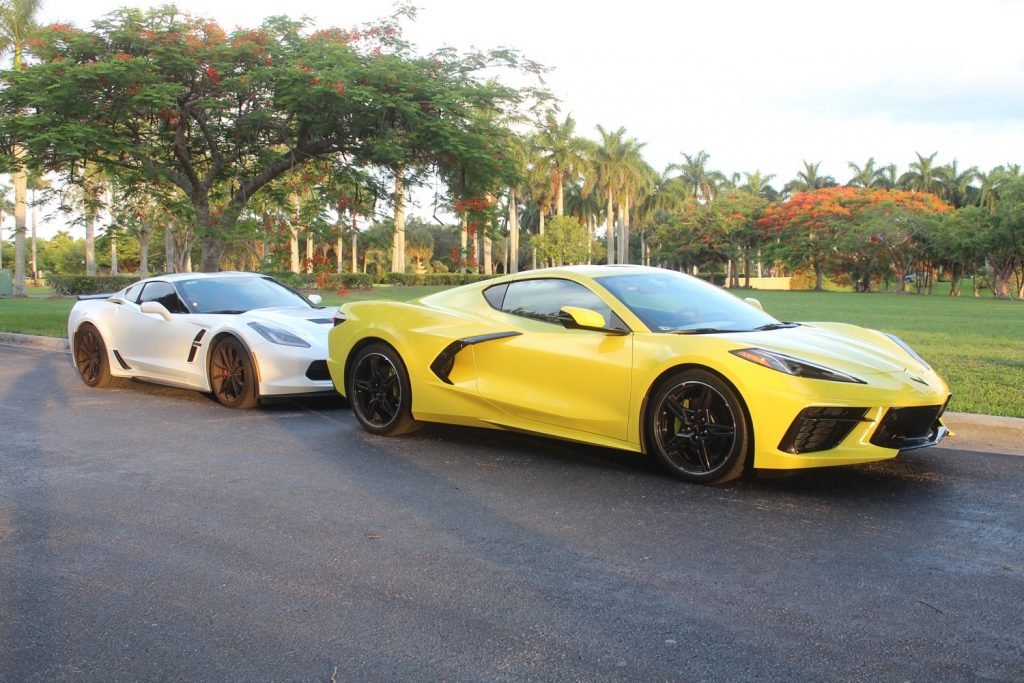 Although they are both low-slung high-performance coupes, the designs of the C8 and C7 differ in many ways. There are two major reasons for this. One is that the C8 is the first mid-engine Chevy Corvette. The mechanical parts are of course hidden from view, but the very different location of the engine compared with the C7 has an inevitable influence on the exterior design.

The other is that auto design in general evolved in the six years between the introductions of the two models. As we will see, the Chevy Corvette C8 has styling elements which might have looked fussy back in 2014, but are more familiar today. 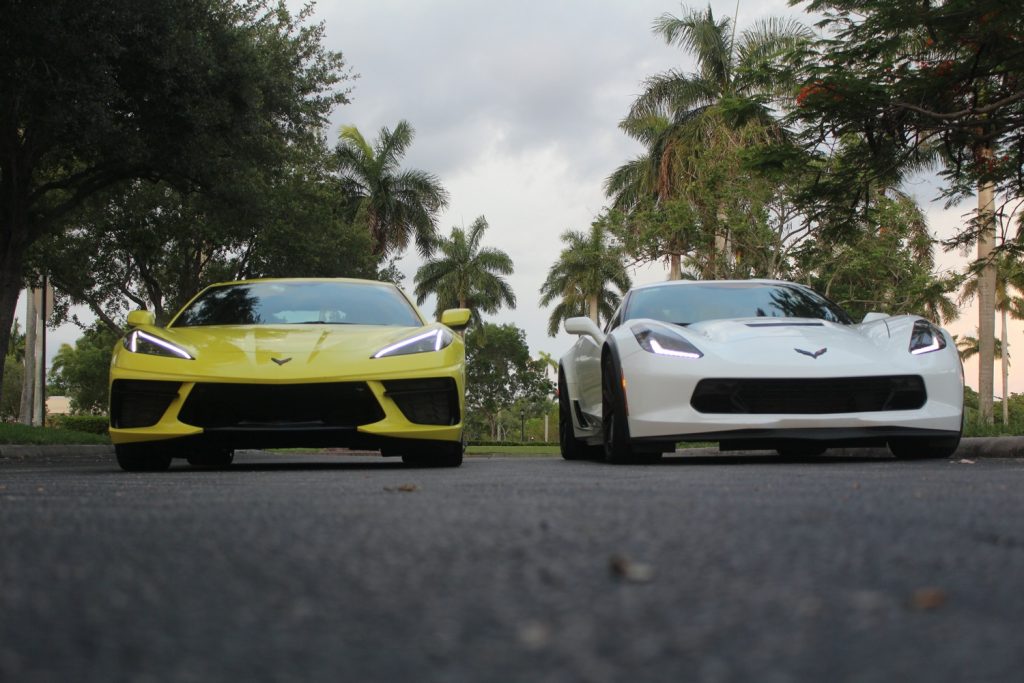 This is immediately obvious even from a restricted, road-level view of the two Corvettes’ front ends, as shown above. The C7 has a single air intake of an almost quadrilateral shape, though in fact a tweak at each lower corner means that it is in fact six-sided. By comparison, the C8 has three lower grilles covering a much larger area. The largest of these, in the center of the fascia, is separated from those on each side by diagonal lines which move inward and upward from the bottom to the top. 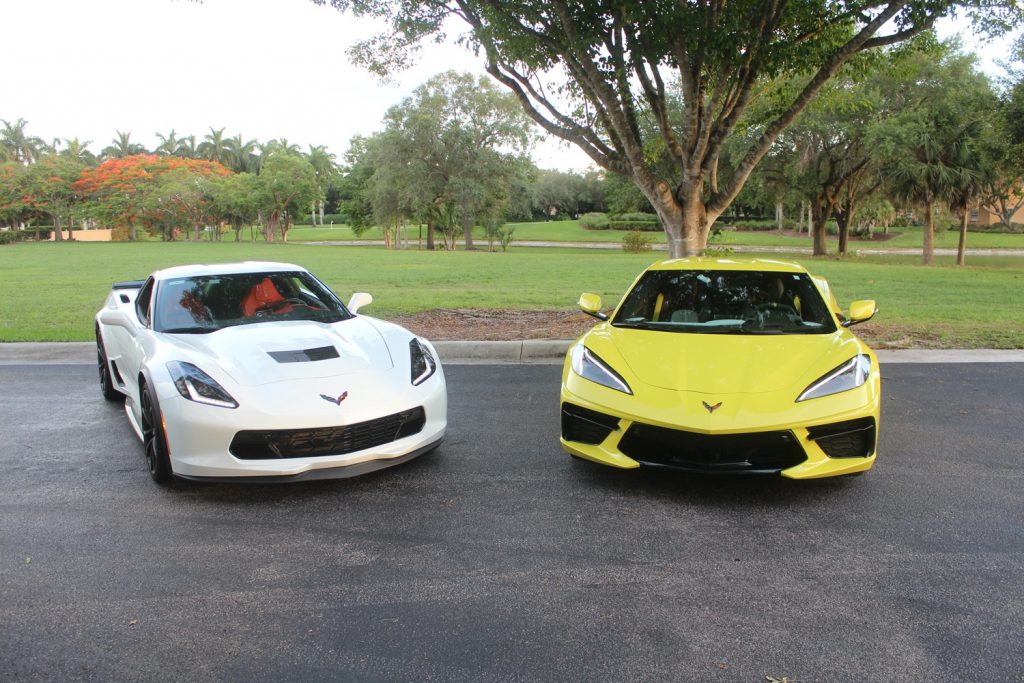 The C7’s hood has a pronounced bulge in it to clear the top of the V8 engine, translating to very pronounced levels of surface development. This is not necessary – and was not retained even for styling purposes – on the C8, whose engine resides several feet behind its location in the C7. 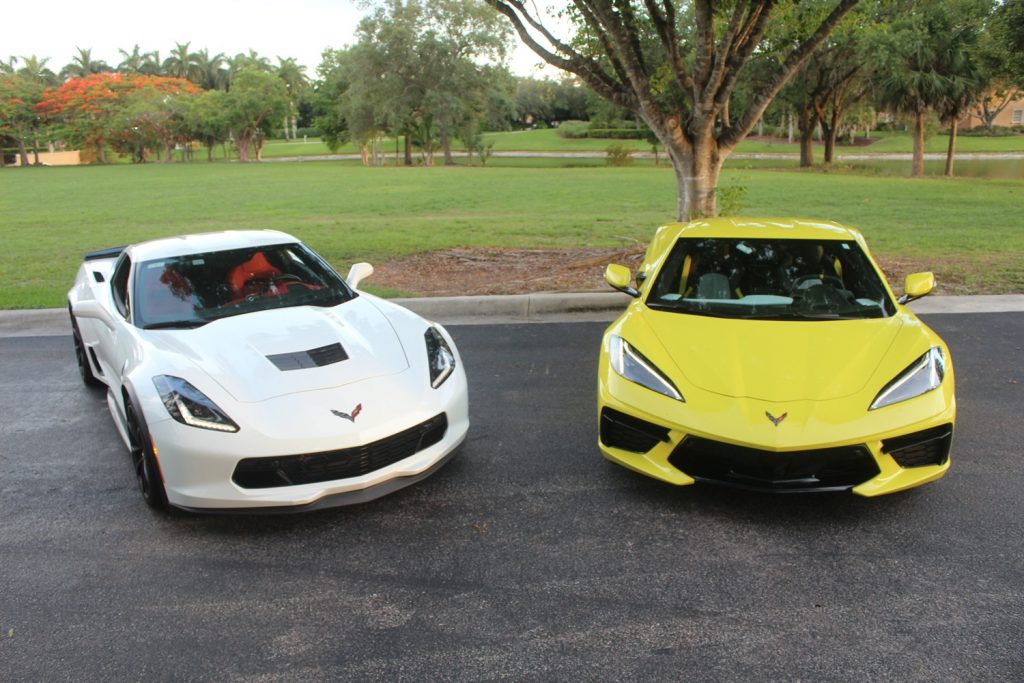 The driving lights on the C7 predominantly run along the lower edge of the headlight units, but kick up as they head toward the sides of the car, creating a hockey stick pattern. Meanwhile, each headlight on the C8 has two sets of driving lights / daytime running lights, one running along the top inner edge and another that takes a much shorter and almost vertical route on the outer edge. Also notable is the contrast in size of the Corvette logos on the two cars – large on the C7, considerably smaller on the C8. 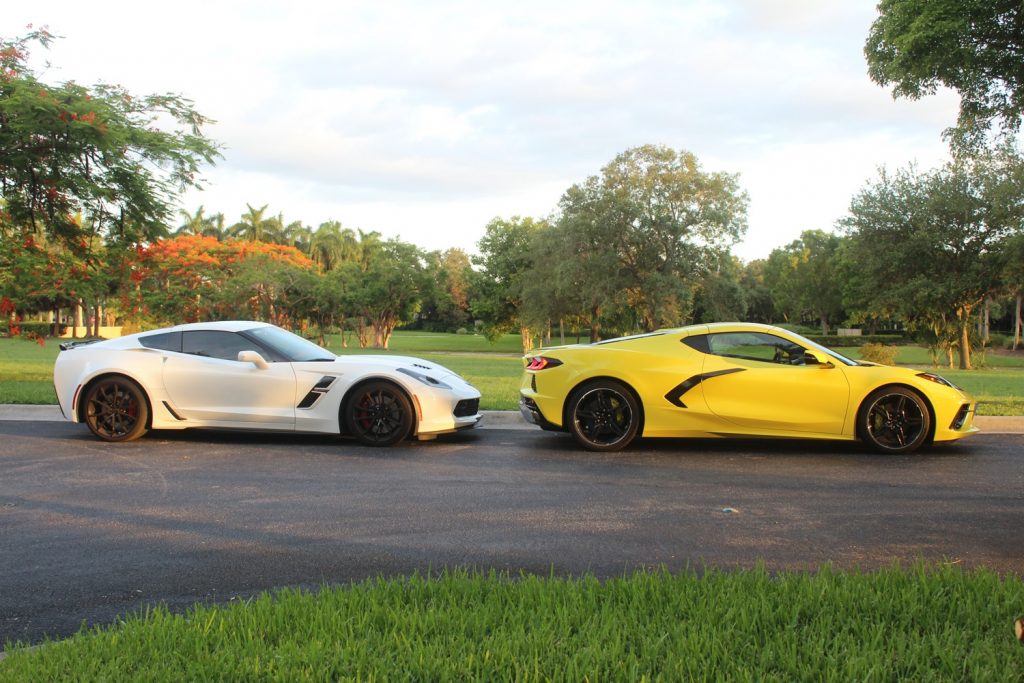 From a side view, the changes that Chevrolet was obliged to make to the Chevy Corvette design due to the different mechanical layout become very obvious. In the C7, the passengers sit very far back, due to the position of the engine up front and nothing of comparable size behind it. The car, therefore, has a very long hood and “cab-rearward” proportions in comparison with the C8, which has what was once called a ‘cab forward’ look because in this case the engine effectively pushes the passenger compartment toward the front. Whereas the two C7 occupants sit almost near the rear wheels, their counterparts in the C8 sit roughly in the middle of the car. 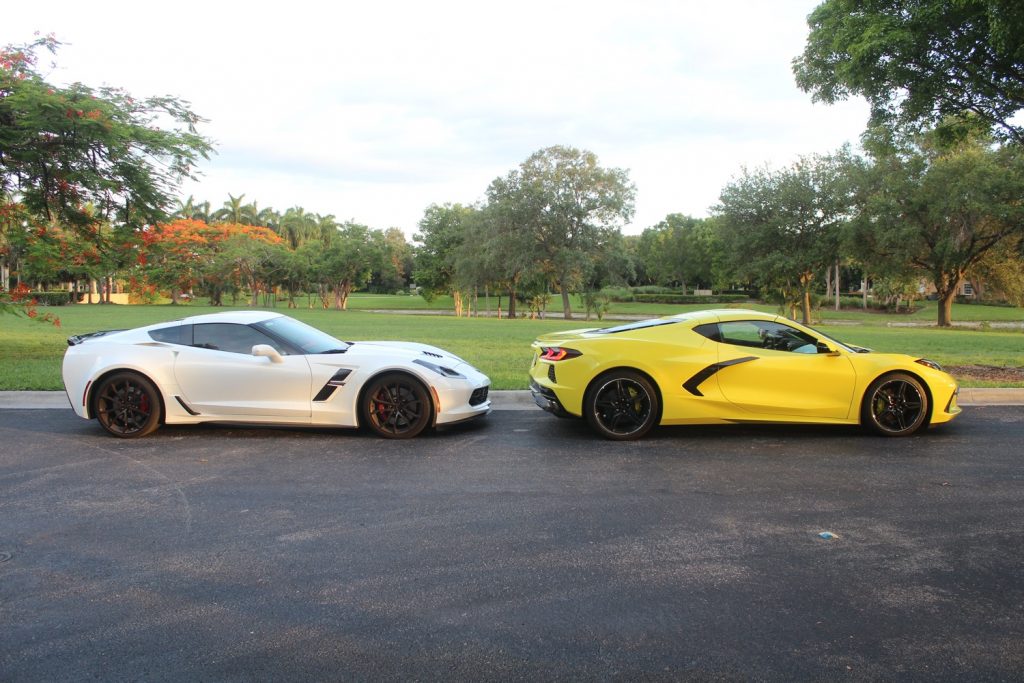 For obvious reasons, the air intakes/outlets are entirely different between the two models. The C7 has an air outlet / extractor behind the front wheels, from which heat and turbulent under hood air is expelled from. It is followed by a small intake behind the doors, just ahead of the rear wheels. There is no corresponding front outlet in the C8, because it doesn’t need one, but a very large intake that sends air into the engine compartment can be seen at the rear. 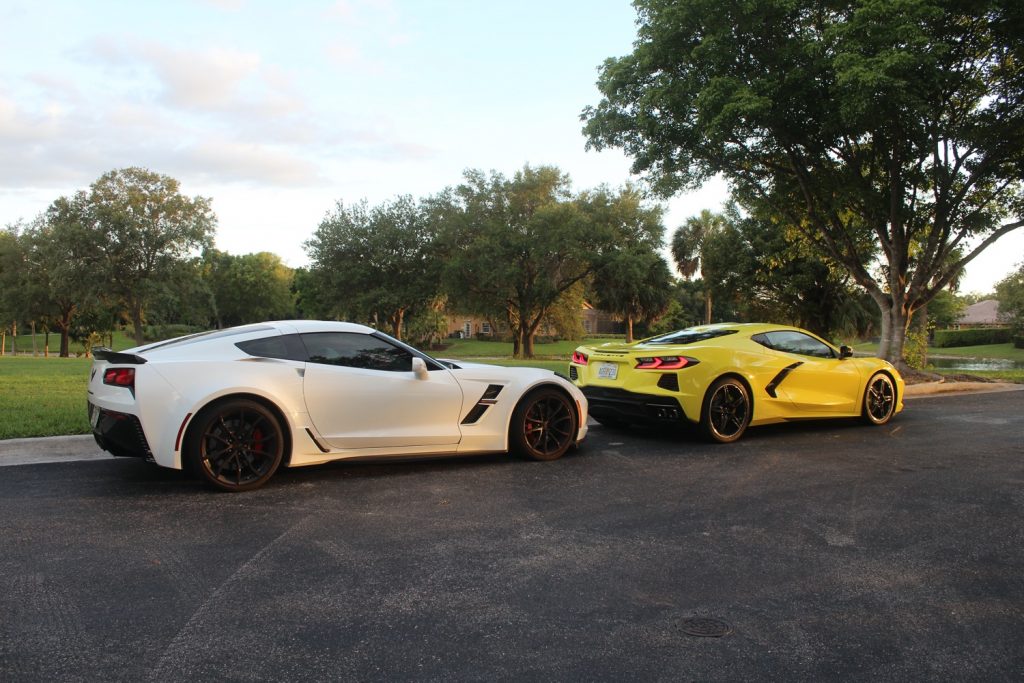 In each case, the roofline is at its highest above the passengers’ heads. Since the passengers in the C8 sit so much further forward, this gives it an advantage, since the roof has far more space to complete its slow descent to the rear of the car, and leads into a flatter panel behind the engine compartment. It is also very likely that the C8, therefore, has an aerodynamic advantage over the C7, at least at the rear. 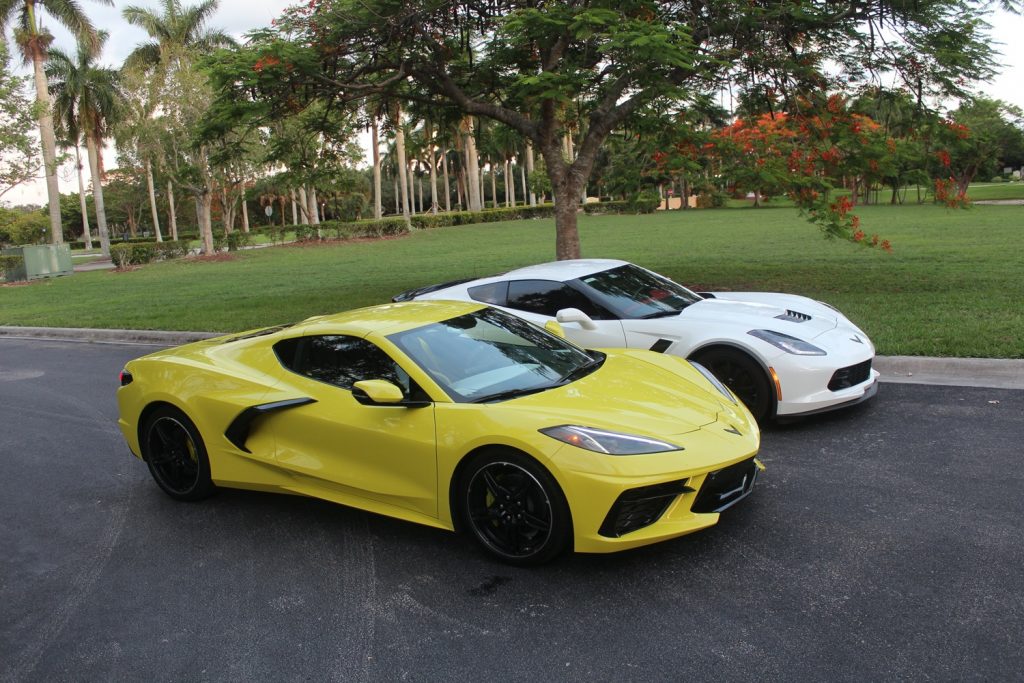 The layout of the C7 made it obviously challenging for Chevrolet designers to provide enough window space for good rear visibility. This should not have been much of a problem on the C8, but it seems that Chevrolet turned down the opportunity and made that rear-side visibility worse than it was on the C7. Partly to blame are the latest automotive styling trends, which seem to prioritize more aggressive design over outward visibility. Clearly, this has not impacted C8 Corvette sales in the slightest. 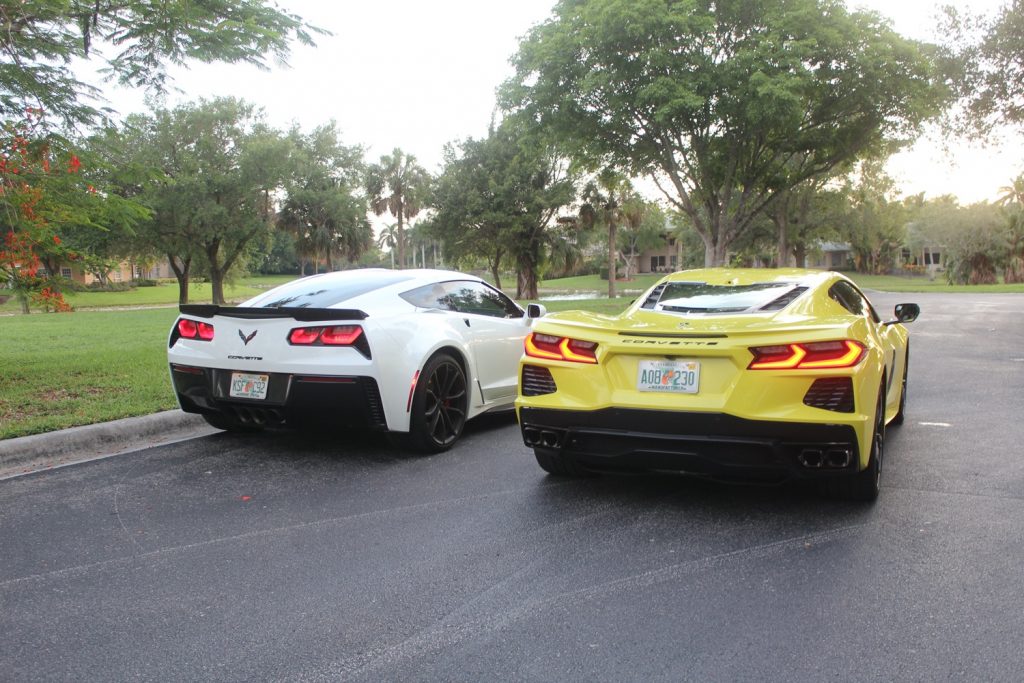 The rear fascia design of the C8 is far more complex than that of the C7. This may also be partly due to fashion, though the C8 also requires more space for the two air outlets / extractors, which the C7 also has, albeit in a smaller size. The rear license plate on the C8 is mounted much higher, which has made it impossible to include the Corvette cross flags logo. Seemingly to make up for that, the Corvette lettering is larger on the C8 than on the C7. 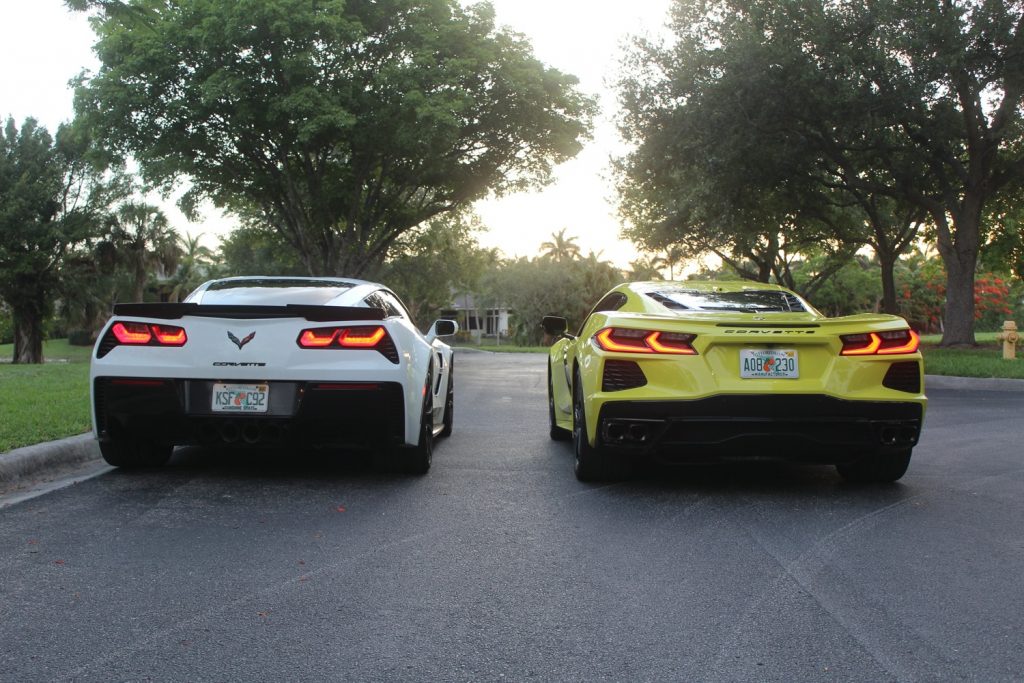 As discussed in a previous GM Authority article, both Corvettes demonstrate a rear lighting design philosophy of combining horizontal and vertical elements. The details vary considerably among Chevrolet models, but the basic principle is the same throughout the range. In the C7, it is seen in one pair of hockey stick shapes on each side of the car. In the C8, the shape is more complex, with a horizontal element which changes direction twice at the side of the vehicle through two slightly obtuse angles. This makes the lighting almost turn back on itself, and produce an arrow effect.

And yet despite the multitude of differences between the design of the C7 and C8, both sports cars are clearly and instantly recognized as Corvettes, which speaks to the ability C8’s designers to bring the Corvette into the 2020s while maintaining its unique styling identity.

Want the latest on all things Corvette? Then subscribe to GM Authority for more Corvette news, Chevrolet news and 24/7 GM news coverage.