You see it all the time – a driver drops the hammer and spins the rear tires, ripping off a smoky burnout. Some drivers make it look easy, child’s play even. Unfortunately, the driver behind the wheel of the Chevy Monte Carlo in the following video is not that kind of driver.

The video, which was recently posted to social media, is short, clocking in at less than a minute. However, that’s all the time that’s needed for the Chevy Monte Carlo driver to fail miserably in their attempt to look cool, busting up not only the two-door Chevy, but also a few other adjacent vehicles in the process.

Captured on what appears to be a tight back lane road, we see the white Chevy Monte Carlo slowly roll out in the top-right of the frame. The driver stops momentarily before gassing it, sending two plumes of tire smoke into the air around the rear of the white two-door.

So far, so good, but the road where the Chevy Monte Carlo driver decided to pull this stunt doesn’t exactly leave any room for errors. After scorching the tires, the driver appears to release the brakes, sending the two-door lurching forward. The Chevy quickly gathers speed, with the rear slithering left and right, even sliding over some nearby grass.

Suddenly, the car bobs to the left, and it looks like driver has lost control. The white Chevy Monte Carlo then plows through some trash bins before slamming into two parked cars, sending the bins flying into the air and crumpling the parked cars’ bumper and doors.

Luckily, it looks like no one was hurt. After a moment, the driver in the Monte Carlo slowly backs up, reversing back towards the houses where they originally decided to do a burnout. 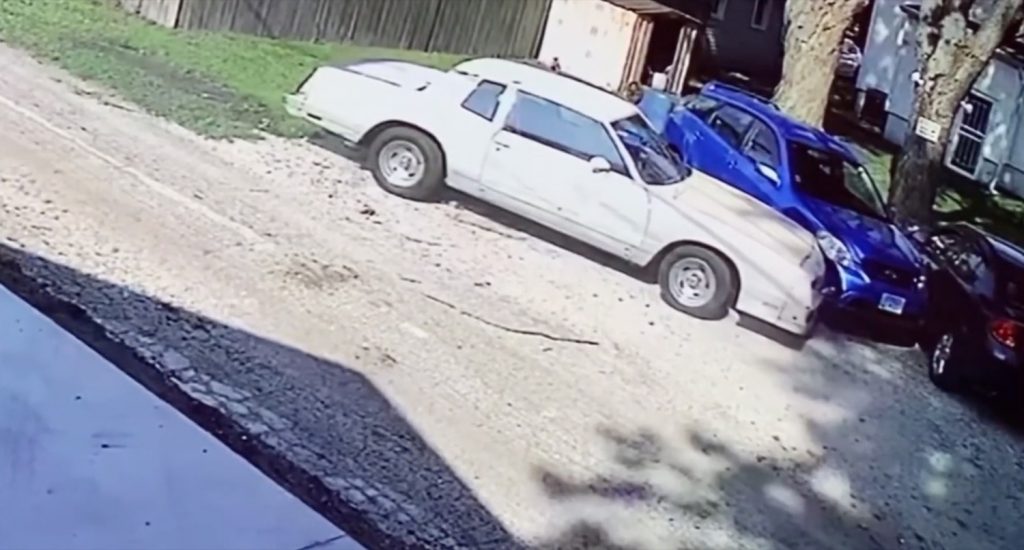 The reasoning behind the poor decision-making is not exactly obvious, but either way, the result is pretty clear.