Debuting with the 1949 model year, the Oldsmobile 88 soon became the brand’s image leader and most profitable line in the rapidly expanding post-World War II economy. The sleek new lines of the 88 were part of the new design ethos at Olds that went by the moniker “Futuramic.” Powered by the 303 cubic-inch Rocket 88 V8 transmitting 135 horsepower through either a three-speed manual or four-speed Hydra-Matic automatic, the mid-size 88 was a performance marvel. The Oldsmobile 88 was one of the fastest production automobiles in America in 1950, winning ten of nineteen races in the 1950 NASCAR season and capturing the 1950 Carrera Panamericana. It has been argued that the first-generation Olds 88 marked the beginning of the muscle car era. 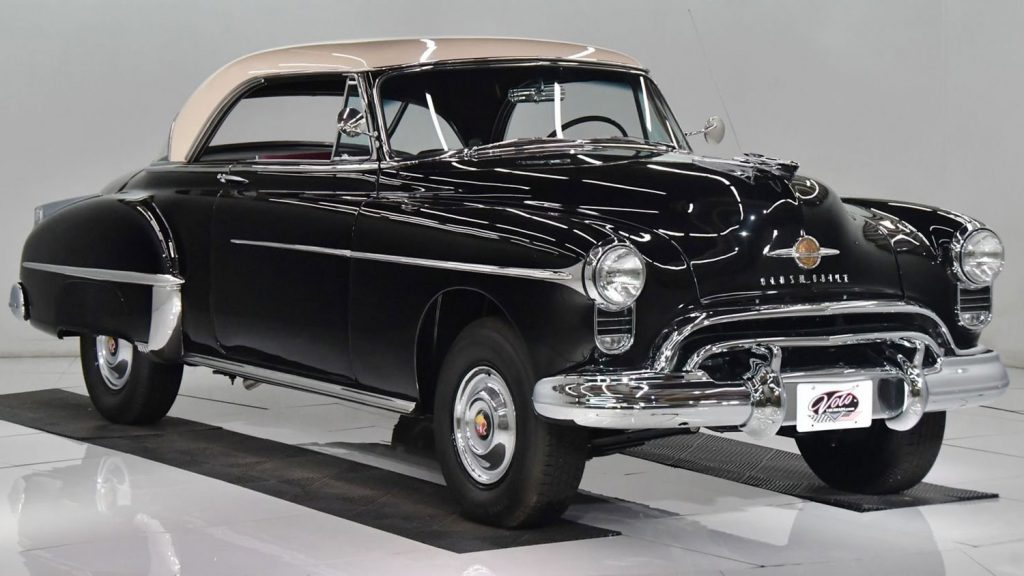 This Oldsmobile 88 is dressed in the muted tones of a post-war America that had yet to become emboldened with bright colors and the conspicuous consumption that was a hallmark of the mid- to late-1950s. The glossy black is complemented by a khaki metallic roof. The finish presents quite well, indicating great effort taken in prep and execution. The leading edge of the hood is festooned both with the Oldsmobile globe emblem and the Olds Rocket ornament. Taillights are wrapped in brilliant chrome and emblazoned with the “88” logo. The Olds globe is centered above the trunk lock with another Rocket 88 emblem just left. Chrome and stainless brightwork sparkle under fluorescent lights. The Gleaming Oldsmobile hubcaps are offset by modern blackwall radials. 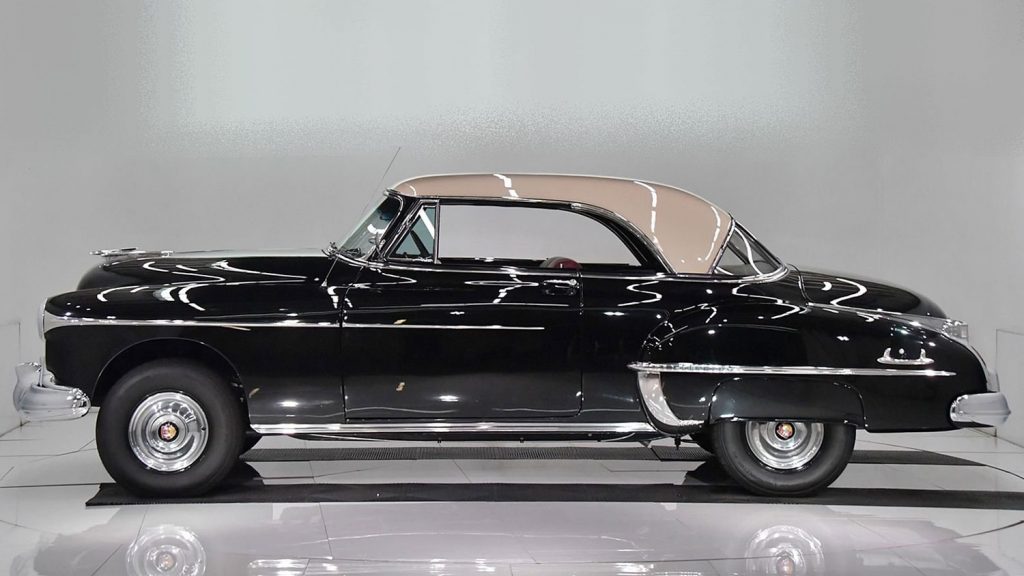 The interior of this Oldsmobile 88 is the picture of restoration perfection. Having seen scant fourteen miles since the completion of a comprehensive rebirth, this 88 is better than new. The seats are covered in a combination of rutilant leather and pinstriped gray cloth. The floor is swathed in a slightly darker gray carpet, whilst the dash has been finished in a glossy pewter metallic. Vintage Air climate control and vents have been mounted on the lower edge of the dash. All gauges have been restored, and the radio has been replaced with a modern head unit that mimics the dimensions and appearance of the original. A lovely factory clock graces the center of the dash. 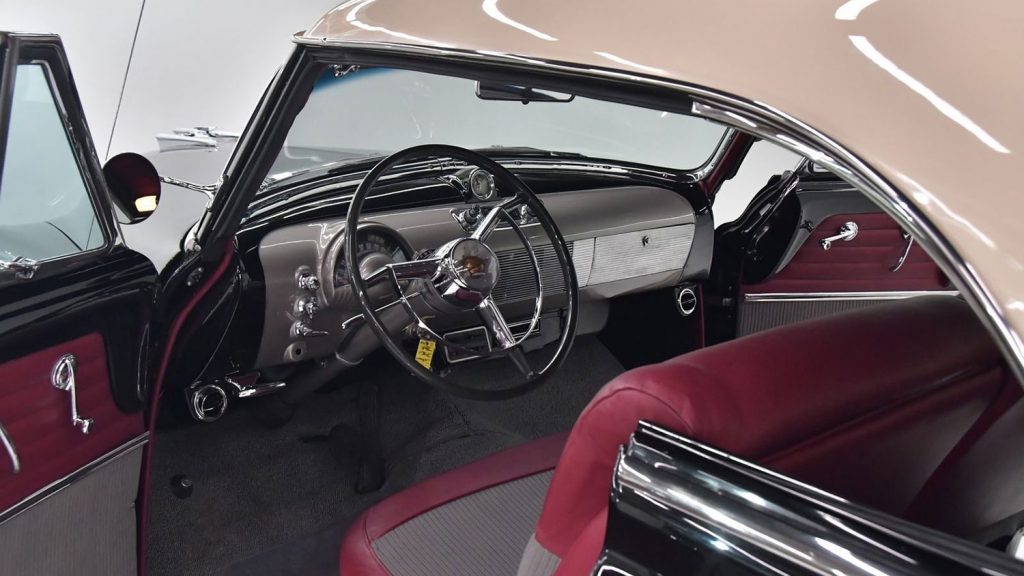 The engine compartment of this Oldsmobile 88 is home to the rebuilt and beautifully detailed Rocket 88 V8. The original two-barrel carb has been swapped for a four-barrel. ROCKET 88 valve covers are fitted, along with the original manifolds, air cleaner, and glass bowl filter. Power brakes with front discs have been installed. The electrical system has been upgraded to twelve volts, with an alternator replacing the generator. A modern electric fan has replaced the belt driven unit. The balance of the engine bay has been detailed with original finishes. 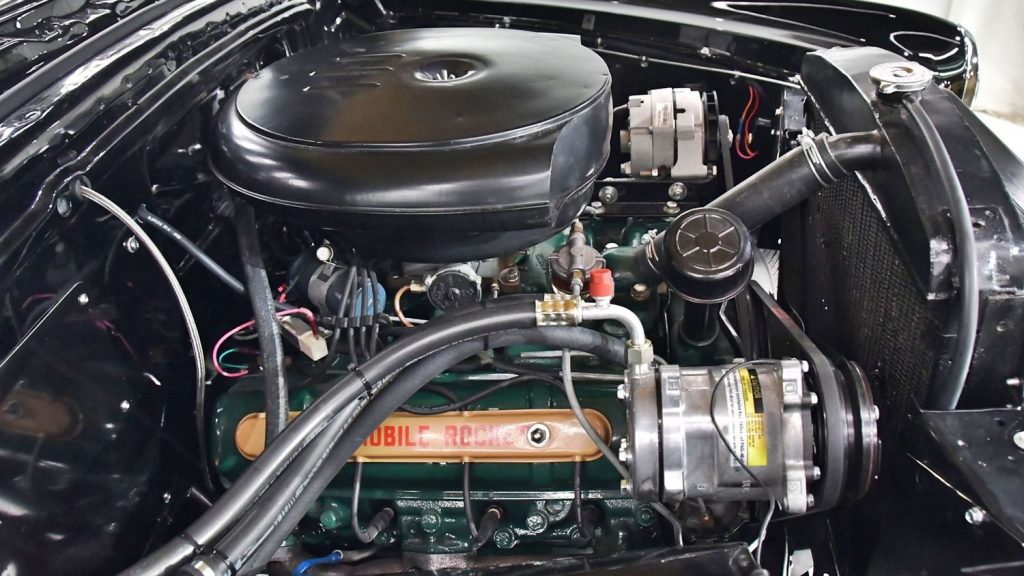 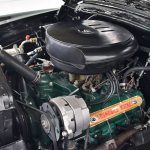 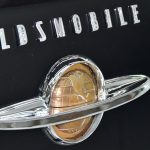 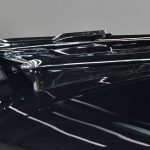 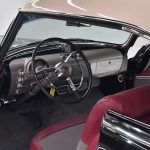 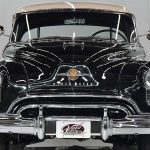 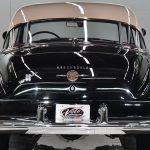 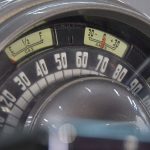 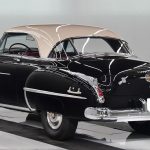 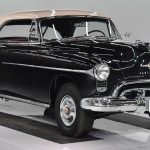 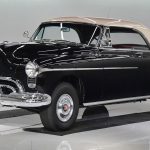 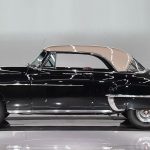 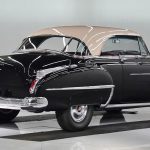 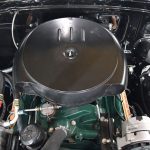 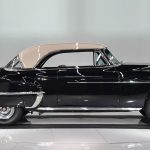 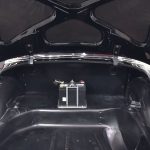 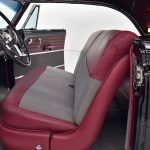 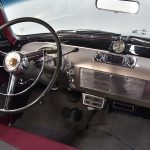 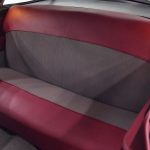 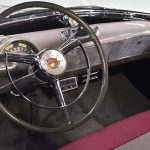 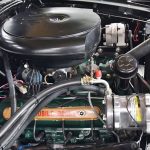