Just last month, GM Authority brought you the very first spy shots of the upcoming, next-generation Chevy Colorado. Now, our spies have captured a prototype of the Colorado’s corporate cousin – the 2023 GMC Canyon – for the very first time as it was undergoing testing. 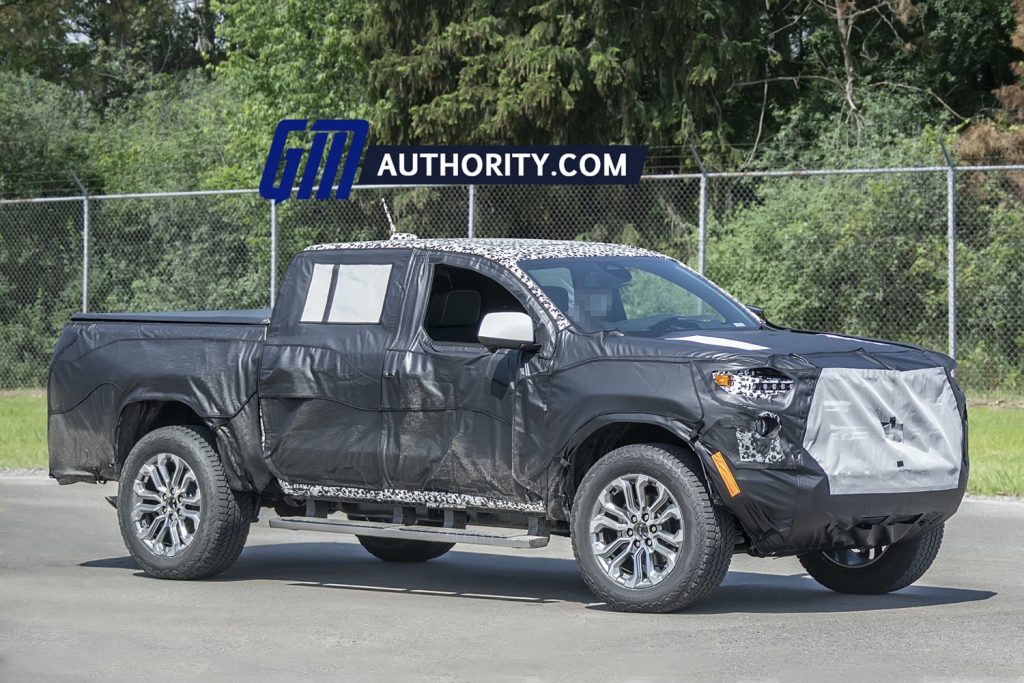 Much like the Colorado prototype, the Canyon seen here is a Crew Cab, Short Box model. The model seen here also appears to be the range-topping Canyon Denali, judging by the 20-inch chrome wheels and chrome running boards. 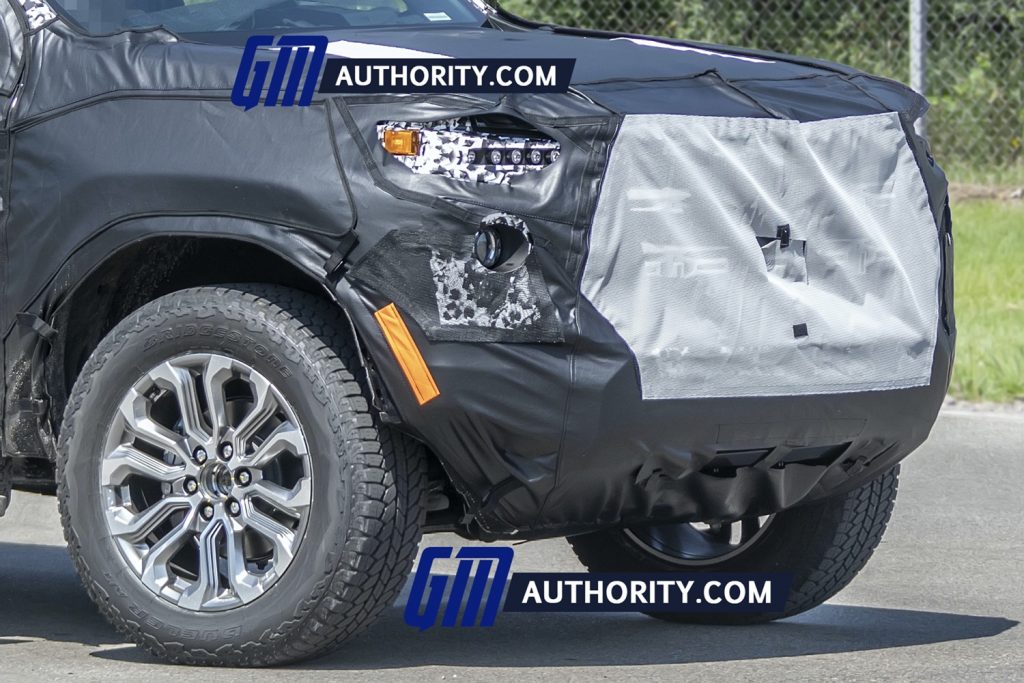 Interestingly, the front fascia of this 2023 GMC Canyon prototype has quite the steep rake. That means that either the truck is missing various trim bits or that it’s not the Denali, and is instead the off-road-oriented Canyon AT4 trim. That said, those low-hanging running boards certainly don’t scream “off-road vehicle” to us, though the Bridgestone Dueller A/T tire on the prototype is certainly more rugged than needed for the Denali. It’s possible that the 2023 GMC Canyon Denali will simply wear more off-road-oriented tires from the factory. 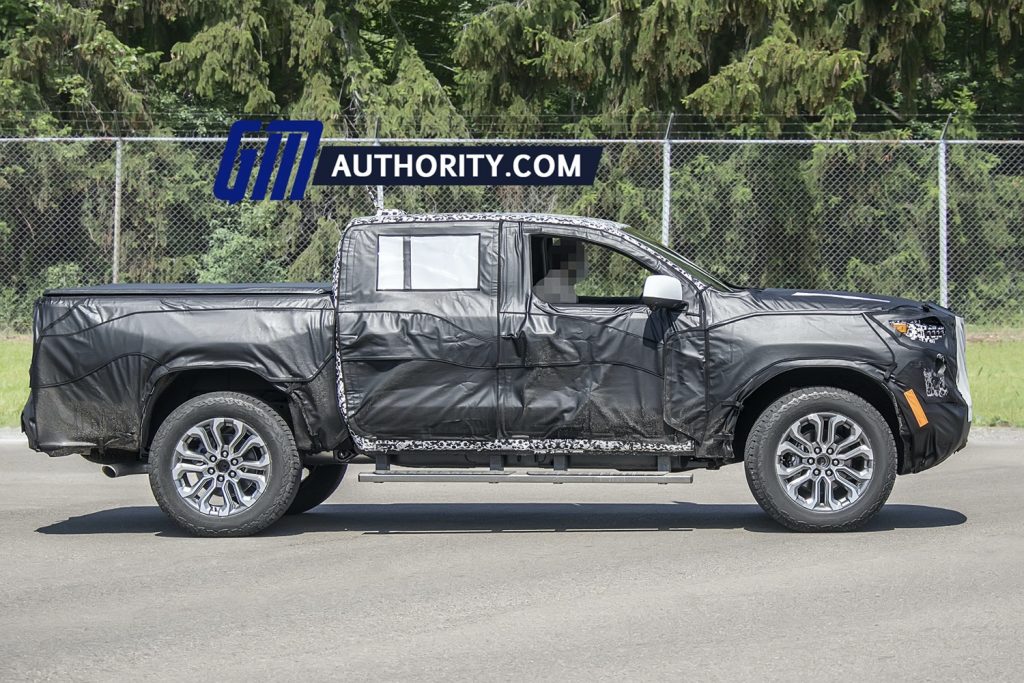 The front end of this prototype also features a different arrangement of its placeholder headlights compared to the 2023 Colorado. While the Chevy features high-mounted, horizontally-oriented lights that are consistent with the general arrangement seen on the Chevy Silverado, this 2023 GMC Canyon prototype has an LED signature at the top, with vertically-oriented light sources running down the front-fascia. The treatment seems to be consistent with the facelifted 2023 GMC Sierra HD prototypes that we’ve seen previously. 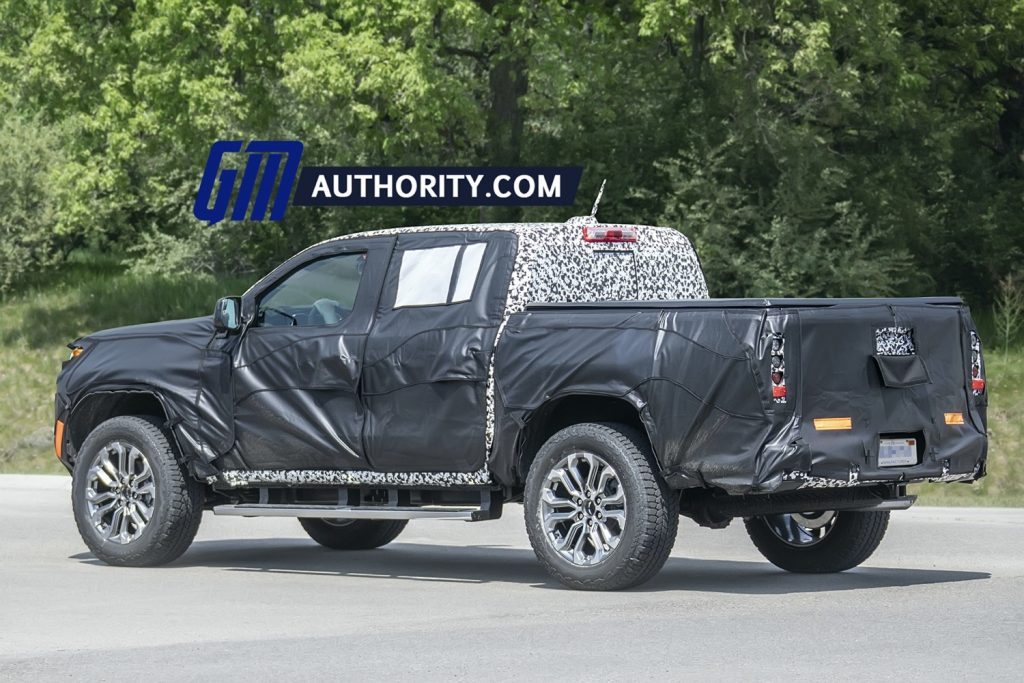 Though the prototype is wearing quite a bit of vinyl camo, we can still make out that the 2023 Canyon will feature more aggressive body surface development than the current model. For instance, the fender flares appear to be bolder, the sheetmetal treatment on the doors appears to be more intricate, and the front fascia has quite the stubby, upright appearance. 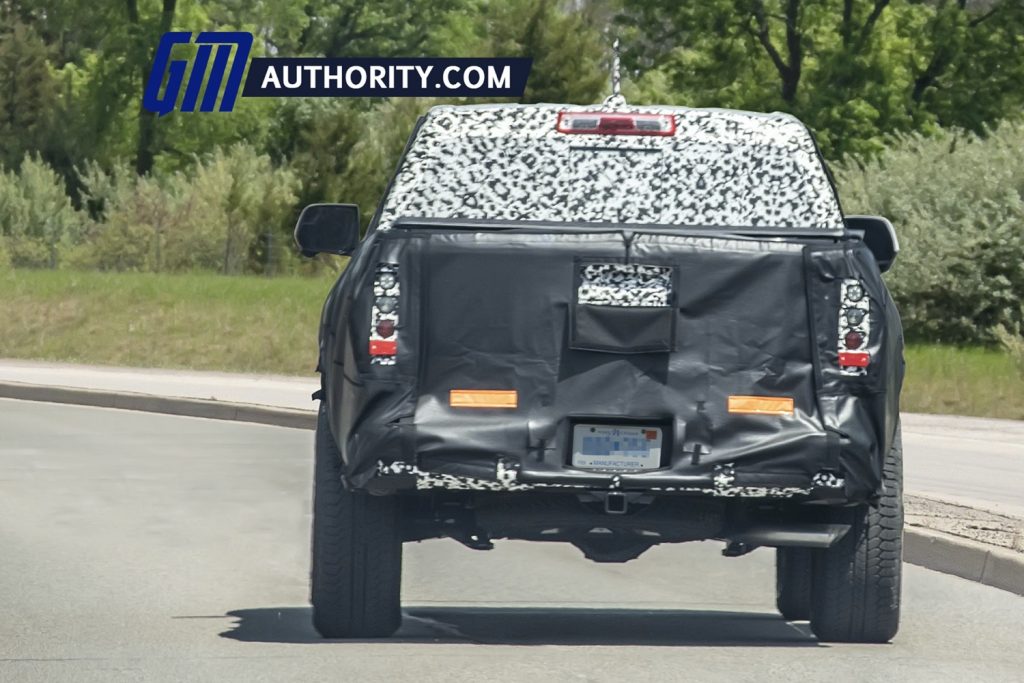 The camo covers up most of the box, which is similarly wearing a set of placeholder tail lights. A single-exit exhaust can be seen on the passenger-side of the truck, and we can just barely see what seems to be the CornerStep rear bumper. 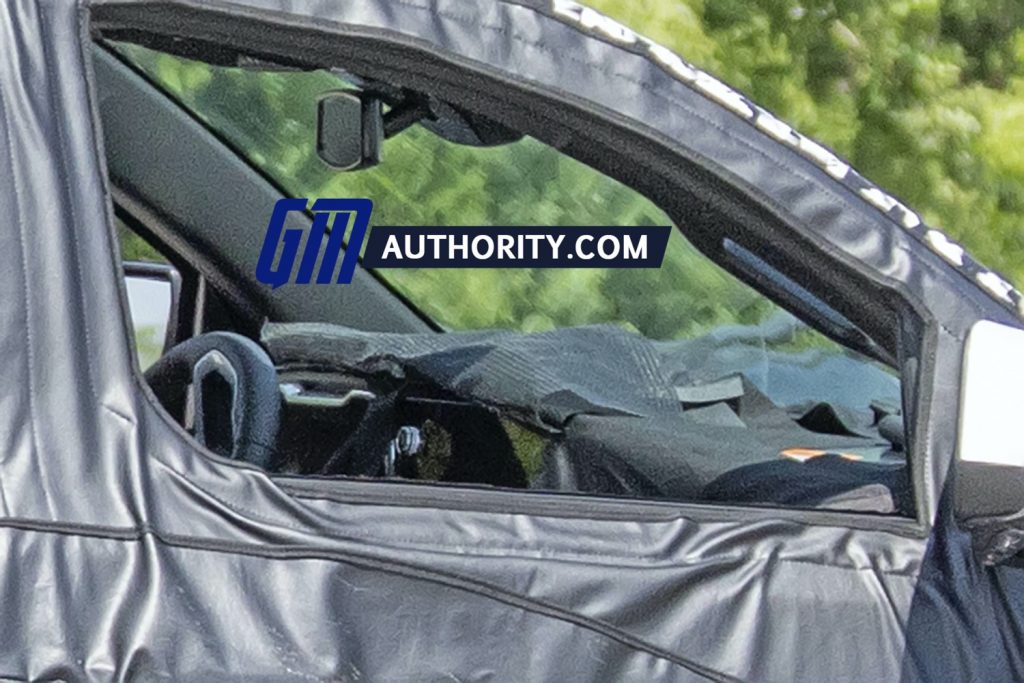 The 2023 GMC Canyon will ride on an updated version of GM’s current GMT-31XX midsize body-on-frame architecture, which will be dubbed 31XX-2. The vehicle will get an all-new exterior and interior, along with an all-new powerplant in the form of the turbocharged 2.7L I-4 L3B gasoline motor currently offered in the Sierra 1500. In that application, the boosted four-pot is rated at a healthy 310 horsepower and 348 pound-feet of torque. GM’s 10-speed automatic transmission will handle shifting duty. The current model’s atmospheric 2.5L I-4 LCV and 3.6L V-6 LGZ, along with the 2.8L I-4 LWN turbo-diesel baby Duramax will not be offered. 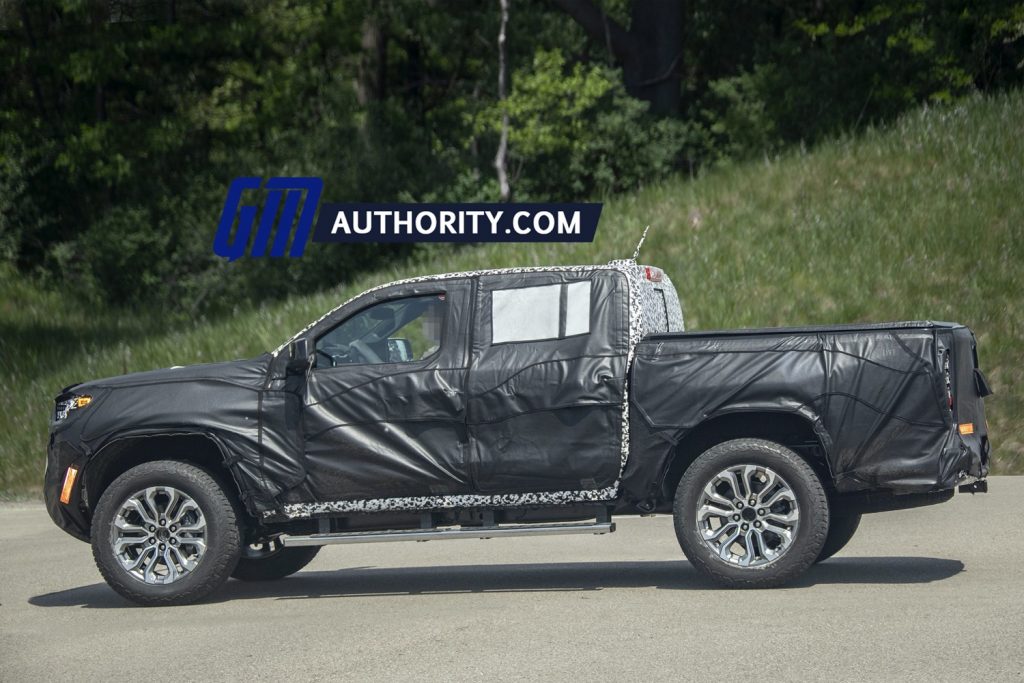 The current Canyon consistently resides at the bottom of its segment from a raw sales volume standpoint, though that is more of a factor of limited production capacity and pricing that’s higher than the segment average. 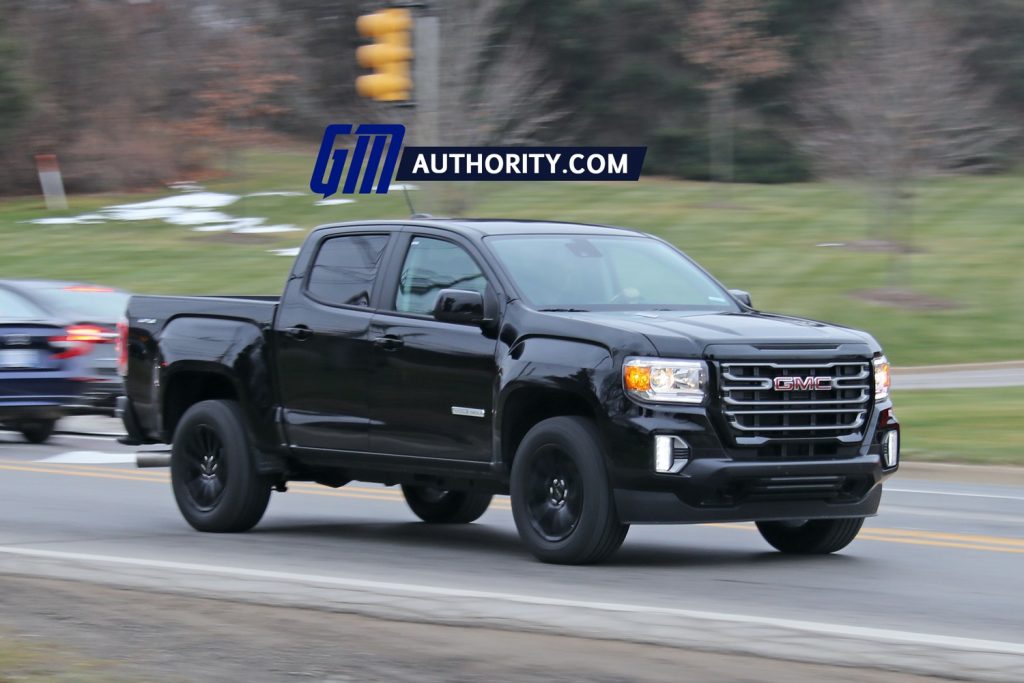 The 2023 GMC Canyon will continue to be built at the GM Wentzville plant in Missouri alongside its corporate cousin, the 2023 Chevy Colorado. GM invested $1 billion into the facility specifically for the new midsize pickups.

The Canyon will continue being sold in the three North American countries of the United States, Canada, and Mexico. It’s also possible that the next-gen model will make its way to the Middle East – the only remaining market outside North America where GMC does business.