The short teaser clip shows a camouflaged, pre-production prototype for the Chevy Silverado ZR2 undergoing some off-road testing on a wet and muddy surface. A V8 engine can also be heard revving in the teaser clip, suggesting the Silverado ZR2 will feature one of GM’s current Gen 5 Small Block engines. As we reported previously, the Silverado ZR2 is expected to initially offer the naturally aspirated 6.2L V8 L87 gasoline engine, which can be found in the current 2021 Chevrolet Silverado 1500, where it doles out 420 horsepower and 460 pound-feet of torque.

This teaser video also gives us a look at the Silverado ZR2’s machine face wheels, which are wrapped in a set of knobby off-road tires, and its sizable non-ventilated disc brakes. The video ends with a zoomed-in shot of the truck’s grey and red ‘ZR2’ badge, which is identical to the ZR2 badge featured on the mid-size Chevy Colorado ZR2.

The 2022 Silverado ZR2 is expected to feature off-road suspension upgrades, including MultiMatic DSSV dampers similar to those featured on the aforementioned Colorado ZR2. The truck is also expected to implement a different front fascia, which will provide more ground clearance, along with a front sid plate and a different rear fascia. The truck in this teaser clip appears to feature the same rear bumper as the regular Chevy Silverado 1500, however, and features the same side assist steps. 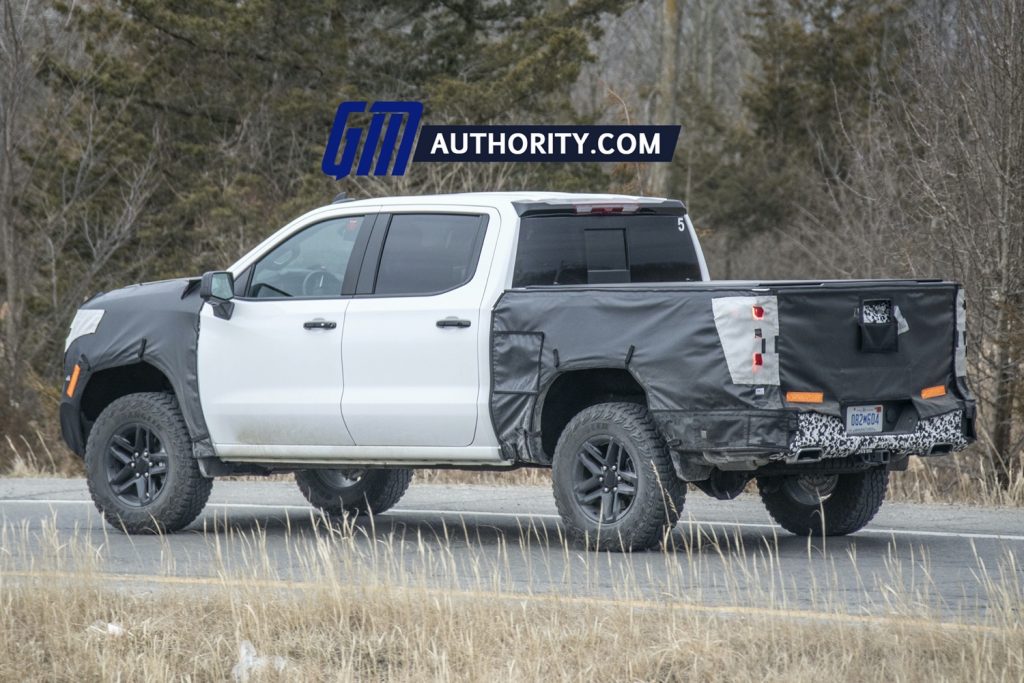 The Silverado ZR2 will slot above the current Silverado Trail Boss in the truck’s lineup, arriving as a more capable and off-road-focused model variant. The ZR2 model will arrive alongside the 2022MY full mid-cycle enhancement (MCE) for the Silverado, which will also include revised exterior styling and an overhauled interior with new technology.

Chevy says it will officially unveil the Silverado ZR2 this fall. We’ll continue to provide updates on the highly anticipated off-roader as they become available, so be sure to subscribe to GM Authority for more Chevrolet Silverado news, Chevrolet news, and around-the-clock General Motors news coverage.