With a supercharged 6.2L Hellcat V8 engine producing 702 horsepower and 650 pound-feet of torque, the Ram 1500 TRX is the most powerful production pickup truck available today. However, the significant amount of weight the Ram TRX has to carry around means the truck can’t hold its own against lighter and less powerful performance cars like the Chevy Camaro ZL1 or Shelby GT500 Mustang.

Hennessey Performance Engineering has a solid (albeit expensive) solution for those Ram TRX owners that not only want to have one of the most capable off-road trucks available, but also compete with sports cars on the dragstrip. The Texas-based tuning company’s Mammoth 900 performance upgrade package for the supercharged pickup boosts output to 912 horsepower and 873 pound-feet of torque – enough power to give the 6,349-pound pickup similar straight-line performance to a Chevy Camaro ZL1. That claim may seem a bit lofty, but Hennessey has proven as much by racing a Mammoth-equipped TRX against a Camaro ZL1 1LE for a promo video recently posted to its YouTube channel. 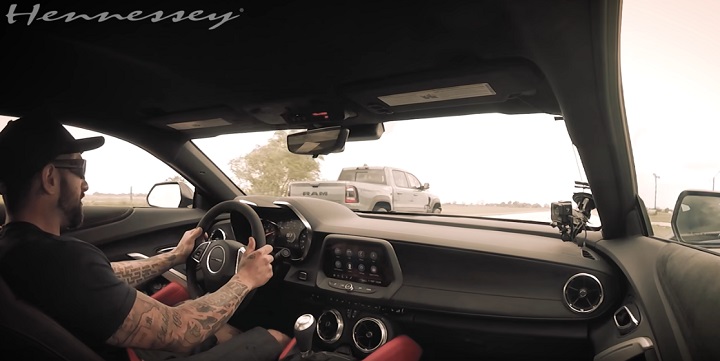 The Camaro ZL1 1LE in question is bone stock and equipped with the GM 10-speed automatic transmission, which is superior to the six-speed manual when it comes to straight-line speed. That said, the rear-wheel-drive Camaro has trouble putting the power down and is sluggish off the line, while the four-wheel-drive Ram TRX rockets away. The Camaro reels the Ram TRX back in toward the end of the race, but by then the Ram has built up a big enough gap to easily take the W. The second race is more even and it looks as though the Camaro will definitely reel the Ram back in, but the camera pans away before we can see the finish. We imagine the Chevy Camaro ZL1 would be better able to show its true speed if the race had a rolling start, but either way, it’s impressive that a Ram pickup truck is even in the equation here.

Check out the races in the video below.